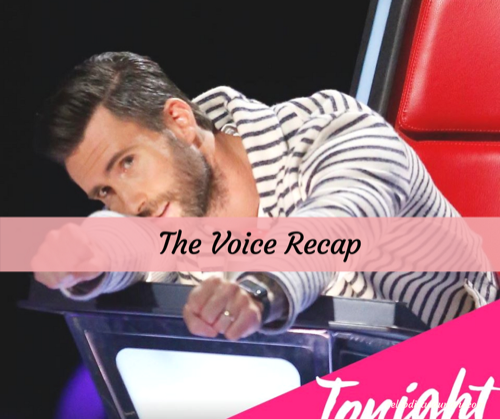 Tonight on NBC’s Emmy Award-winning musical competition The Voice premieres with an all new Thursday, March 6, 2017, season 12 episode 4 and we have your The Voice recap right below.  On tonight’s The Voice season 12 episode 4 episode as per the NBC synopsis, “The “blind auditions” continue as superstar coaches Alicia Keys, Adam Levine, Blake Shelton and Gwen Stefani all vie to discover and coach the next singing phenomenon from the country’s best vocalists.”

All it takes is the push of a button who will go ahead tonight.  It all starts right now!  First up tonight is Micah Tryba singing “I’m Every Woman”

The first coach to turn is Blake Shelton followed by Gwen Stefani.  Blake asks her if she ever did vocal training but she tells him she did not.  Blake tells her she blew him away.  Gwen warns her not to be tempted by Blake’s dimples.  Micah picks Blake Shelton as his coach!

Troy Ramey from New York singing Cat Steven’s Wild World.  Blake turns his chair almost immediately, Adam turns next followed by Gwen.  Last to turn is Alicia.  Adam starts out telling Troy that he is a major contender to win.  Gwen tells him he made the song his own and he moved her.  Alicia calls him cool and tells him she would love to work with him.  Blake tells Troy he wants to meet his family and hugs his mother. Blake congratulates him on getting four chairs to turn and tells him how much strength is in his voice. Troy picks Gwen Stefani as his coach!

Ericka Corban singing Ella Jenkins Wade in the Water.  Sadly no judges turned their chairs.  Adam tells her there were some awesome tones.  Alicia tells her she was special and she would love to see her come back.  Alicia encourages her to keep on singing.

Jack Cassidy related to the singing Cassidy Family singing Joan Osbourne’s One Of Us.  The first coach to turn is Adam followed closely by Alicia.  Adam tells him to come home.  Blake tells him he had a vision of Alicia playing the piano with him.  Blake then congratulates him.  Alicia tells Jack this is the first time she has seen someone play the piano and sing.  Alicia asks about his background and he tells her his grandma is Shirley Jones from the Partridge Family.  Jack picks Alicia as his coach!

Kawan Debose singing Marvin Gaye’s Let’s Get It On.  The first judge to turn their chair is Adam Levine followed by Blake Shelton & Gwen Stefani. Gwen tells him he is gifted & amazing.  Adam tells him that he rendered him speechless that the only man that can do the same falsetto as Kawan did is Prince and he tells him he is one in a billion and he is number one on team Adam. Kawan chooses Adam as his coach!

Taylor Alexander singing Cher’s Believe and Adam is the only judge who turns his chair.  Adam tells him it is the single craziest song he ever heard he cannot believe he sang a Cher song. Alicia tells him he was cool and congratulates him.

Gabi Borromeo singing Happy.  Blake is the first coach to turn followed closely by Adam. Adam runs up when she finishes singing and hugs her and tells her WOW.  Adam tells her he is very surprised it was not a 4 chair turn and he feels she could win the Voice.  He tells her she is unbelievable and belongs on his team.  Blake tells her it was an incredible performance and it sounds like she is smiling when she sings.  Gabi chooses Adam for her choice!

Griffin Tucker singing Elvis’ Heartbreak Hotel he is only 14-years-old.  No judges turn their chairs.  Gwen says another little boo boo and asks him how he was so brave to sing Elvis.  Adam says he should come back again.

Missy Robinson singing Scars To Your Beautiful.  At the last second, Alicia & Blake push their buttons.  Blake tells her Alicia seems the obvious choice but she should step outside her comfort zone and choose him.  Missy decides to choose Alicia as her coach.

Aaliyah Rose singing Rise Up and she is only 14-years-old.  Gwen turns her chair almost instantaneously.  When Aaliyah finishes singing she tells her she is so pleased she is young and she has the voice she has and the style.  Gwen tells her they are going to have fun!

John West singing Duran Duran’s Ordinary World.  All four judges turn for Josh. and give him a standing ovation. Alicia tells him it was an awe-inspiring performance and she would like to sing with him.  Gwen tells him she loves his voice more than anyone else.  Josh chooses Adam as his coach.