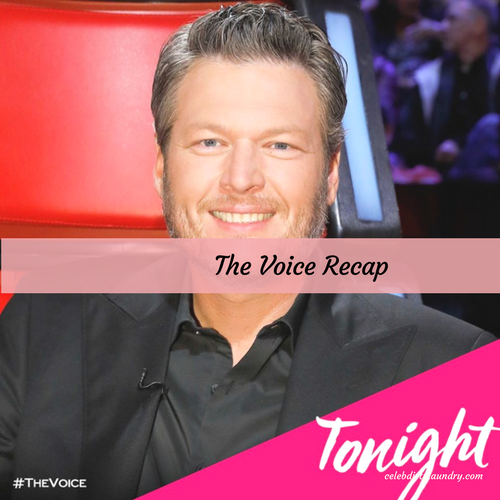 Tonight on NBC’s Emmy Award-winning musical competition The Voice airs with an all new Tuesday, April 11, 2017, season 12 episode 16 and we have your The Voice recap right below.  On tonight’s The Voice season 12 episode 16 “Road to Live Shows” as per the NBC synopsis, “Top moments from Season 12 are recalled in a special edition that traces the journey of the Top 20. Previously unseen footage of the coaches is included.”

Alicia Keys expresses her excitement about her team. She can really feel their emotion when they sing and that is most important to her. She thinks her team has the winner but Blake disagrees. Anatalia Villaranda loved worked with DJ Khaled and won her knockout round easily. Alicia’s next artist, Ashley Levin originally started on Team Blake before joining Alicia after all three judges tried to steal her after her lose in the battle round. Vanessa Fergeson wowed three coaches in the blind auditions. Vanessa chose Alicia over Gwen and Blake. During the knockout round Alicia encouraged Vanessa to sing with more emotion and she easily won the round.

Team Alicia’s next artist is Stephanie Rice who started on Team Gwen before being stolen away by Alicia. She struggled after telling her family she was a lesbian and being disowned. Her emotions are always so raw when she sings. Next on the team is Chris Blue who almost lost his fiancé after a serious operation and has used his experience to fuel his ambition on The Voice. Alicia was waiting for the right person to complete her team and Chris was the answer to her pray. These five artists make up Team Alicia.

Next up is three-time winning coach Adam Levine. He thinks his team is the most eclectic and while they may be the underdogs they have energy the other teams lack. Nineteen-year-old Mark Isaiah was shy growing up and he only recent became comfortable performing in front of others. He loved his time working with John Legend and can’t believe all he learned. Jesse Larson played for Judith Hill after being recruited by Prince. Several of the other coaches regret not picking Jesse especially after his performance in the knockout round.

Public voting will start next week in the live shows and Adam thinks he has the winner. Josh West is the alt-rocker on Adam’s team and all four judges wanted him during the blind auditions. He gets better with each performance. Lilli Passero was on Team Alicia first but Adam was able to steal her away after the knockout round. He and Blake both wanted her but Adam was triumphant. Adam’s next artist is 15-year-old Hanna Eyre. All the judges were blown away by the power in her voice. Adam thinks his team’s willingness to work hard will be hard to beat.

Gwen’s team is comprised of someone from every musical genre. Gwen was thrilled to get JChosen on her team after all four coaches turned from him during the blind auditions. Working with Celine Dion was a dream come turn for J. Right before the battle round J’s mother had a stroke and her illness has increased his passion. Hunter Plake was originally on Alicia’s team but was stolen by Gwen in the battle round. Troy Ramey continues to impress Gwen. Every time he performs she sees a different side of his talent.

Brennley Brown was stolen from Blake during the knockout round and brings a country flare to Team Gwen. She is only 14 years old but sings beyond her years. All four coaches wanted her but Blake won out. Gwen stole her based on her talent and energy. 13 year old Quizz Swanigan started on Team Alicia but was stolen away during the knockout round. He is the youngest performer on the show.

Blake is the last coach to present his team of five. He has won The Voice five times and is convinced this season will be the sixth. Lauren Duski is a 26 year old pop country singer and had to make a hard choice between attending dental school or pursuing her singing career. Her time working with coach Luke Bryant helped her up her game. Aliyah Molden is a sophomore in high school and feels like she has a lot to prove. TSoul has such a strong voice that Blake says it has “herbs and spices”. In the knockout round TSoul made an emotional connection to his song and easily moved on to the live performance. 14 year old Aaliyah Rose was big on Youtube before she came to The Voice. She started on Team Gwen but Blake got her after the knockout round. The last member of Blake’s Team is four chair turn Casi Joy. Blake fought hard to be chosen as her coach. She learned so much working with Luke Bryant. Blake thinks all five members of his team will be seen on the Grammy’s one day.

The coaches shared several never before seen behind the scenes moments. Alicia shares that the energy this season is super fun and she shares teasing Adam with his look alike puppet. The jokes are coming non-stop. Blake thinks the advisors this season were the best ones yet. Adam shares his spelling struggles. Celine Dion encourages the singers to just have fun but they find it very difficult being in her presence.