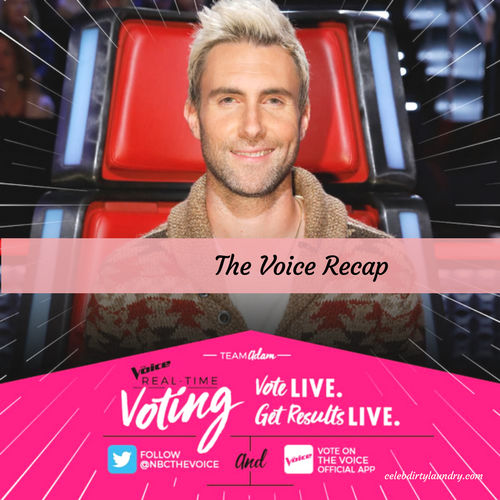 Tonight is Team Adam and Team Gwen. Each one of their artists will perform and then the viewers at home will vote to determine who moves on to the Top 12. The show will send out one tweet per artist and the tweet that is resent the most will determine the winners. The winners for tonight will be announced at the end of the show. Each performance is live. Each coach got to pick one artist who previously left the show to return. The comeback artist for Gwen is Johnny Gates and for Adam is Johnny Hayes. After the public picks two artists from each team, Gwen and Adam will also get to pick one artist from their team to go on to the Top 12.

The first performer for Team Gwen tonight is Johnny Gates who will sing Hands to Myself by Selena Gomez. He loves this song choice because it will give him a chance to show another side of himself. Alicia loved his energy and that he is the male version of Gwen. Honestly, Gwen is so excited that Johnny got to come because he is adorable. Next up for Gwen is Troy Ramey and don’t miss next week’s episodes with guest coach Shania Twain. Troy will sing A Case of You by Joni Mitchell. His dad died when he was young and he loved Joni Mitchell. Adam thought his performance was so powerful and one of the best in the competition. Gwen felt very proud of Troy.

Quizz Swanigan will perform the Motown classic My Girl by The Temptations. He is the youngest singer on the show ever and is currently in the eighth grade. He was originally on Team Alicia but Gwen stole him away and couldn’t be happier to have him on her team. Alicia loved watching Quizz perform and thought he did an amazing job. Gwen loved his suit and the character he showed while he sang. He was magical. Brennley Brown is the next to sing for Team Gwen. She returned to school since the last show and not many of the other students even knew she sang let alone performed on The Voice. They all will vote for her. She will sing Fly by Maddie & Tae. Blake has been doing the show for a long time and he thinks he made a mistake by letting her go. He does think Gwen was a great choice for her and together they are a deadly combination. Gwen thinks she was beautiful and has so much style.

Team Gwen has JChosen up next and he will perform Nothing Compare to You by Prince. His mom recently had a stroke and was just released from the hospital. She will be watching. He is worried about singing Prince’s song but Gwen thinks he can really tap into the emotion of the song. Gwen was inspired by JChosen’s performance and she asks the home audience to vote for him. The last artist for Gwen is Hunter Plake. He is the first artist on The Voice to be in the top 30 on ITunes before the live performances. Neither Blake nor Adam has done it before. He will sing Elastic Heart by Sia. Adam thought he was so good. He is not only a great singer but also truly gifted. Gwen was moved to tears.

Team Adam is the last coach to present his performers. First up is Johnny Hayes. He was on last season’s show but none of the coaches turned around from him. Johnny is so thankful to Adam from bringing him back as his comeback artist. He will sing Ain’t Too Proud to Beg by The Rolling Stones. Adam loved his performance.

Hanna Eyre is Team Adam’s 15 year old pop artist. She returned to school since the last time she saw Adam. All of her teachers have been very supportive. She will sing Skyscraper and really wants to make Adam proud. Adam thinks Hanna is such a sweet person with a voice that scares him. She is so powerful and he thinks she just keeps getting better. Josh West’s life just blew up since his performance on The Voice. People are coming to his shows and he is loving it. He will sing More Than a Feeling by Boston. Adam says he can come be the lead singer for his band once he retires. Adam says that is one of the hardest songs to sing and at only 18 Josh kicked ass.

Mark Isaiah says so many girls have asked him to their proms and he was on the cover of Teen Vogue. Adam tells him it can’t go to his head. Mark will perform All Time Low by Jon Bellion. Adam thought it was a great choice because it is not a generic song and will allow Mark to show his true talent. Gwen has been a big fan of Mark’s since day one and thinks he did a great job. Adam asks the voting audience to please give him more time to work with Mark.

Team Adam has Lilli Passero up as his next artist. She has been supporting herself as a waitress and is ready to make it as a singer. She will perform It’s Too Late by Carole King. Lilli is so grateful that Adam stole her away from Alicia. She appreciates so much that he believes in her and that she could actually win the whole thing. Adam is impressed with her ability to draw people in when she sings. Alicia has always felt such a connection to Lilli and loves her intensity. Adam feels like he is campaigning for his team and he tells the people at home that Lilli is a world class singer.

Jesse Larson is the last singer and will close out the night for Adam. He will sing Sir Duke by Stevie Wonder. Stevie has been Jesse’s idol forever and he is thrilled to be singing Sir Duke. Adam is thrilled with his performance and is on his feet cheering. He thinks it was the best vocalist of the night. Jesse was like a wizard and he blew Adam’s mind.

If Alicia had to pick two from Gwen’s team it would be Troy and Hunter. The moment of truth for Team Gwen indicates that America voted to send Brennley Brown and Hunter Plake to the Top 12. Gwen decides to send Troy Ramey on to the next round. Quizz Swanigan, JChosen and Johnny Gates are sent home.

Voting is closed for Team Adam and America picks Jesse Larson and Lilli Passero to move on to the Top 12. Adam picks to Mark Isaiah continue on the show. Hanna Eyre, Johnny Hayes and Josh West’s are sent home.