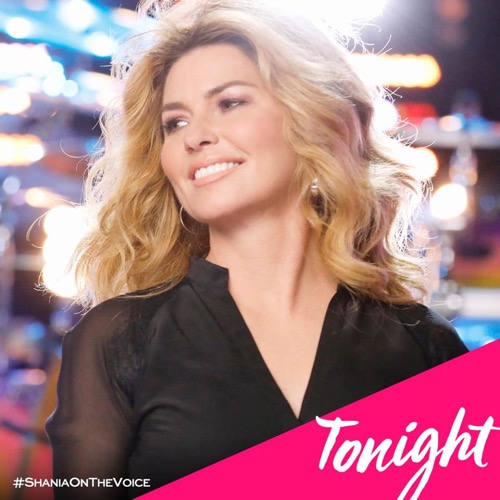 Tonight on NBC’s Emmy Award-winning musical competition The Voice airs with an all new Tuesday, April 23, 2017, season 12 episode 19 and we have your The Voice recap right below.  On tonight’s The Voice season 12 episode 19 “Five-Time Grammy Award winner and Country Music’s reigning best-selling female artist, Shania Twain, will serve as a key adviser for the Top 12 artists. The top 12 artists perform live.”

On tonight’s show Shania Twain helps coach the remaining performers. She then joins the other coaches in a fifth chair. The top 12 artists will perform for their lives. The home audience can vote during the live show and one artist will go home tomorrow night.

Jesse Larson is the first singer of the night and is on Team Adam. He will perform Make You Feel My Love by Adele. Shania encourages him to get desperate vocally. Adam and Shania want him to make the audience cry. Shania was blown away by his performance. He is a stunning vocalist. Adam thought his performance was incredible.

Mark Isaias is the next performer for Team Adam. He will sing One Dance by Drake. Mark wants to introduce America to his R&B side. Shania wants Mark to work on his confidence. He is the whole package and now just needs to show it to the world. Mark blew Shania and Adam away with his star quality during his performance.

Team Alicia’s first performer of the night is Stephanie Rice. Alicia wants her to sing White Flag by Dido and while Stephanie is not familiar with the song she is excited to sing it. She wants to make it her own. Shania is excited to see her live performance and was not disappointed. She was deeply moved by the emotion Stephanie displayed in her song. Gwen was also impressed. Alicia thinks she is the purest vocalist on the show.

Troy is thrilled to see Shania and is so grateful to Gwen for saving him. He will perform Free Fallin’ by Tom Petty. He thinks the song is a great description of what he is doing right now. Both Gwen and Shania ask him not to re-phase the song and he agrees. Shania loved the subtleties in his voice and said he made the song his own. Gwen loved the whole song, especially the first chorus.

Team Blake present Aliyah Moulden as his first singer and she will perform Heat Wave by Martha and the Vandellas. Shania asks Aliyah not to over sign the song. She needs to believe in herself. Shania is impressed with the way Aliyah commands the stage. She is truly a performer and Shania compliments Blake for choosing Aliyah. Blake also comments on her energy and ability to perform.

Chris Blue loves Shania Twain. His bus driver in school used to play her music everyday on his way to school. He is very excited to work with her. He will sing Love and Happiness by Al Green. Alicia is so happy to have Chris on her team and encourages Chris to show his softer side. He needs to build to the big. All of the judges are on their feet after Chris’s performance. He brought the energy and dynamic that Shania was hoping for. Alicia says he made it explode.

Team Blake has Lauren Duski up next. She is the ultimate fangirl of Shania and is shaking when she meets her. Lauren will sing Lord, I Hope This Day is Good by Lee Ann Wolmack. Shania wants Lauren to make sure she doesn’t rush it. This song was perfect for Lauren and her pure voice according to Shania. Blake speaks directly to the camera and encourages country music fans to vote for Lauren. She is the real deal.

Lilli Passero got sick during the week and had to go to urgent care to get IV fluids. She is able to call in and Skype with Shania and Adam. Adam wants her to sing Man I Feel Like a Woman by Shania. Lilli is intimidated by the song choice but very thankful for Shania’s input. Shania enjoyed Lilli’s sassy and both she and Adam as so happy that she is feeling better.

Brennley Brown is so excited to see Shania. She will sing Long, Long Time by Linda Ronstadt. She would love to make a record with this as a single. Both Gwen and Shania encourage her to make the song her own but also not to go too big. Her performance is amazing. The female coaches are on their feet. Shania is blown away by her emotion and technique. Blake thinks she is with the right coach because the song choice was perfect. Gwen says her performance was just perfect.

TSoul from Team Blake will sing Always on My Mind by Willie Nelson. He wants to prove to Blake that saving him was a good move. Shania encourages him to balance the vocal gymnastics of the song. During his performance Shania felt his soul. Blake feels so proud of his performance.

Hunter Plake will sing Somebody That I Used To Know by Gotye for Team Gwen. He is thrilled to work with Shania because she is a legend. Shania is impressed with his range and Gwen thanks him for helping her win the voice. Shania loved Hunter’s way of digging into the song. He delivered on the song. Gwen loved his creativity.

The last performer of the night is Vanessa Ferguson for Team Alicia. She will sing A Song For You by Donny Hathaway. Vanessa grew up listening to Shania and she encourages Vanessa to use the lyrics to connect to the audience. Shania says Vanessa is pure class inside and out. She has a great sense of style and it comes out in her voice. Alicia talks to America and encourages them to vote for Vanessa if they want magic.