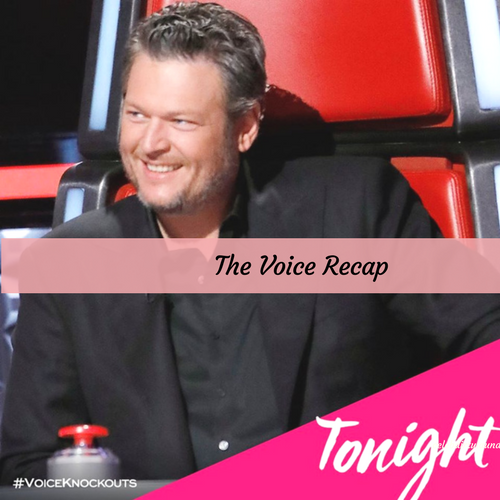 Tonight on NBC’s Emmy Award-winning musical competition The Voice premieres with an all new Monday, April 3, 2017, season 12 episode 14 and we have your The Voice recap right below.  On tonight’s The Voice season 12 episode 14 “Knockouts Premiere, Part 2” as per the NBC synopsis, “The knockout round continues. Coaches Alicia Keys, Adam Levine, Blake Shelton and Gwen Stefani serve as key advisers.”

Anatalia Villaranda and Dawson Coyle are the first pair of the night for Team Alicia. She put them together due to their similarities in age and style. Anatalia will sing Two Black Cadillacs by Carrie Underwood. Dawson finds her intimidating. Alicia encourages her to paint a picture with her song. She thinks this song will give Anatalia a chance to show a different side of herself. Dawson will perform Demons by Imagine Dragons. This song helps him display his depth of emotion. Alicia wants Dawson to concentrate on his breathing while he sings.

Gwen and Blake both loved Dawson but can’t decide between him and Anatalia. Adam also loved them both. Alicia has a very hard time picking but ultimately decides Anatalia will go on to the live round for her team. She was so impressed with the power in her voice.

Blake pairs up Enid Ortiz and TSoul because they are his two soulful singers with big voices. Enid decided to perform When We Were Young by Adele because she has been so inspired by her. Blake encourages her to have more confidence. She has the technique down but has to give it her all. TSoul has been performing as a musician for the last seven years and will sing These Arms of Mine by Otis Redding. Blake loves this song choice because it will give TSoul the chance to shine.

Alicia loved TSoul’s bravado and Enid’s emotion. Enid took it for her. Gwen thought TSoul sounded like an old record in a good way. She doesn’t know who to tell Blackie to pick. Adam would pick TSoul. Blake agrees and choices TSoul to represent him in the live performances.

Adam and Blake trade insults while Gwen showcases her pairing of Aaliyah Rose and Brennley Brown. There are the youngest members of her team and very talented. Aaliyah will sing Like I’m Gonna Lose You by Meagan Trainer. Meagan has inspired her in so many ways. She has helped her be strong and confident. Brennley is so thankful to Gwen for her stealing when she lost her battle round. She will perform Up To The Mountain by Kelly Clarkson. The song really expresses how she is feeling right now. Gwen wants her to show more emotion related to the words she is singing.

Aaliyah and Brennley both do an incredible job. Adam thinks the difference between the two is simply the fact that Brennley is one year older and he would pick Brennley. Blake was also impressed by Brennley and can’t believe that she isn’t on his team anymore. Alicia doesn’t envy Gwen and Gwen decides that Brennley wins the knockout. She will go on to represent Gwen. Blake steals Aaliyah.