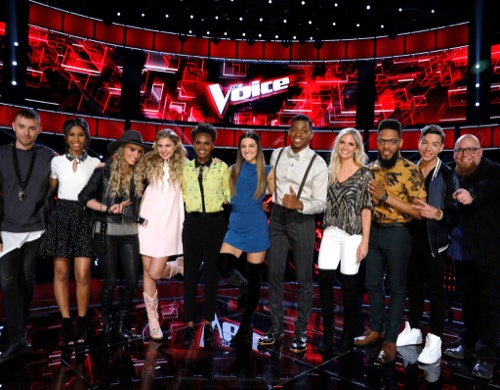 Tonight on NBC’s Emmy Award-winning musical competition The Voice airs with an all new Tuesday, May 1, 2017, season 12 episode 21 and we have your The Voice recap right below.  On tonight’s The Voice season 12 episode 21, “The top 11 artists perform live in front of coaches Alicia Keys, Adam Levine, Blake Shelton and Gwen Stefani for America’s vote.”

The Top 11 compete tonight and one will go home tomorrow. Team Alicia starts off the night with Stephanie Rice singing Behind Blue Eyes by The Who. Alicia thinks Stephanie has a little Alanis Morrissett, a little Fiona Apple and a little Alana Del Ray. She can’t wait to see Stephanie’s performance tonight. Gwen feels like she is watching Stephanie grow right before her eyes. Adam thinks he saw a different side of Stephanie tonight. He thanked her for doing that song. Alicia thinks she is blossoming as a feminine phenomenon. She asks America to vote for her.

Team Blake is up next with Aliyah Moulden and she will perform Take It Back by Reba McEntire. Blake loves her energy and charisma. Alicia loved her and the gravelly sound in her voice. Gwen can’t believe how talented she is. Blake was blown away and says America is falling in love with her and it is hard not to.

TSoul is the next artist to perform and he represents Team Blake. He will sing Lay Me Down by Sam Smith. He will play piano and sing tonight. TSoul has been so moved by his families support and he is thrilled to have them in the audience cheering him tonight. Alicia thinks his performance tonight was very special. Blake tells America TSoul is a beast and they need to vote for him.

First up of the night for Team Adam is Lilli Passero and she will sing A Town Without Pity by Gene Pitney. Carson felt like he was in a James Bond opening as Lilli sang. Alicia thought Lilli transformed during her performance tonight. Adam thought Lilli transported them all to another time and place with that song.

Team Gwen has Hunter Plake and he will be performing All I Want by Kodaline. Gwen is impressed by the emotion in his voice and his ability to arrange his song. Adam thinks Hunter’s voice is very subtle and distinct. Gwen wants to fight for Hunter and tells America he is the real deal. He writes his own music and he is so pure.

Next up is Vanessa Ferguson for Team Alicia and she will sing Diamonds by Rihanna. Adam thinks Vanessa has bad ass style and that she killed it tonight. Blake also thought she was incredible. Alicia thinks her performances are so effortless and powerful.

Lauren Duski performs next for Team Blake. She is excited to tell Blake that Lee Ann Womack sent her a tweet after her last performance. Lauren now has a song in the top ten on ITunes. She will sing Somewhere in My Broken Heart by Billy Dean. Blake thinks the honesty in her voice is one of the things that really makes her stand out. Adam has no doubt that Lauren will be in the finals. Blake agrees 100%.

Mark Isaiah for Team Adam will perform next. He will sing How To Love by Lil Wayne. He was really shaken by being in the bottom two last week and wants to do his best to wow American tonight. Gwen tells Mark that he is in her heart and this song feels like it was his song. All his hard work shows. Adam was a little worried because rehearsals were tough but he brought it home during his performance tonight. He blew Adam away and he asks American to keep him out of the bottom tomorrow night.

For Team Adam is Jessie Larson and he is moving out of his comfort zone. He will sing Human by Rag’n Bone Man. This is Adam’s favorite song right now. Alicia thought he was amazing. Adam says Jessie is not a pop star and he just sings his face off. He needs to win this all.