BY Annemarie LeBlanc on May 2, 2017 | Comments: one comment
Related : Reality TV, Recap, Television, The Voice, TV 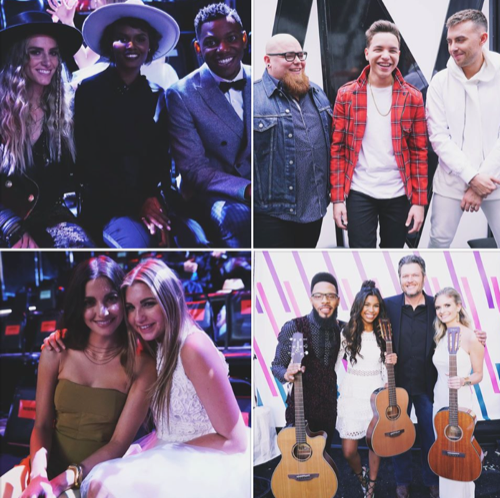 The show starts with the 11 remaining performers taking the stage. Carson gives both Aliyah Moulden and Jessie Larson a chance to talk to America and to thank their fans. The first two artists safe are from Team Blake Lauren Duski and from Team Adam Jessie Larson. Both are thrilled and move to the Top 10.
Alicia Keys and her team of Stephanie Rice, Vanessa Ferguson, and Chris Blue sing Natural Woman by Aretha Franklin.

Carson asks Chris Blue what it would mean to him to make it to the Top 10 and says it would mean the world to him and he thanks Alicia for having faith in him. Blake Plake is so thankful for this opportunity. The next singer moving on to the Top 10 is from Team Alicia and it is Chris Blue. Next America saved from Team Gwen, Brennley Brown. There is now one representative from each coach in the Top 10.

Team Gwen (Brennley Brown and Blake Plake) take the stage with Gwen Stefani to sing Fix You by Coldplay. Carson shares behind the scene clips and Alicia flubs her lines while Blake shares a lot of silly dance moves. Stephenie Rice and TSoul share what they have learned from their coaches. Two more results are announced and they are, from Team Blake Aliyah Moulden and from Team Adam Lilli Passero.

Stephanie Rice from Team Alicia and Mark Isaiah from Team Adam will perform tonight to determine who will go on to the Top 10 and who will go home. Stephanie sings Issues by Julia Michaels and Mark sings Seven Years. American now has a chance to save one these artists. The audience now has the next 5 minutes to instant tweet to save either Mark or Stephanie. The voting window closes and America saves from Team Adam Mark Isaiah. Stephanie Rice is sent home.