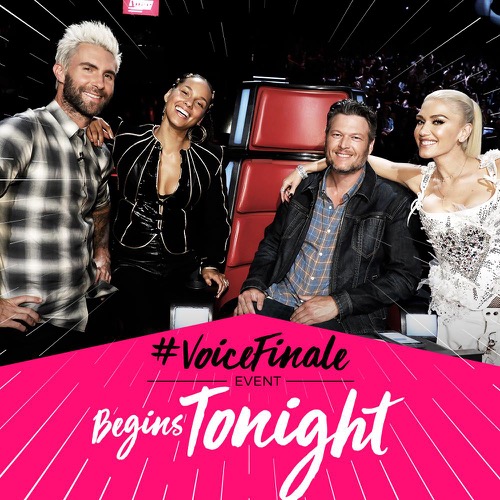 Tonight on NBC’s Emmy Award-winning musical competition The Voice airs with an all new Monday, May 22, 2017, season 12 episode 27 and we have your The Voice recap right below.  On tonight’s The Voice season 12 episode 26,  “America will vote to keep the top three artists in the competition. After these finalists are revealed, the bottom two artists will be sent home immediately, while the middle three artists will compete in the Instant Save for the last spot in the finale.

The show starts with the four remaining performers hoping to win the finals. Aliyah Moulder records her original single “Never Be Lonely” in an iTunes recording session. She then performs the song on the show live. Carson thinks the song was so fun while Gwen is so excited that Aliyah has stayed turn to herself. Blake thinks the song is radio ready. Blake is so impressed with the person Aliyah is and encourages America to help her win the Voice.

Carson reminds viewers that voting is now open. Carson interviews Jesse Larson and his coach Adam. Adam reminds Carson that he is the only coach who turned around for Jesse and when he wins the whole thing everyone will have to listen to him. Jesse thanks everyone for their support. He will sing “Takin’ It To The Streets” by The Doobie Brothers. Carson is blown away by his performance. Alicia thinks it was dope. Jesse was in his element and is so genuine. Alicia loved it. Adam is so happy that he and Jesse have been able to keep him true to himself. Adam says Jesse should win the whole thing and his humbleness should be rewarded by America.

Chris Blue and Alicia sing a duet of Diamond and Pearls by Prince. Lauren Duski from Team Blake immediately follows singing “The Dance”. Adam loves her voice and thinks it is very comforting. She is beautiful and so talented. Blake can’t stop smiling. He thinks that song is such an important country song and he felt like he was hearing it for the first time. He tells country music fans Lauren is the one they have been waiting for and she needs their vote.

The next duet is between Blake and Aliyah Moulden singing “Dancing in the Street”. Chris Blue debuts his new original single “Money on You”. First, he records it on iTunes and then performs it live on the show. Alicia thinks this song captures Chris’s true essence. Chris says the song was inspired by his fiancée Stephanie. The crowd goes wild after his performance. When Alicia watches Chris perform she feels like she is already at his show. His performance is electric.

Jesse Larson and Adam sing next with “Let’s Go Crazy” by Prince. They are followed by Lauren and Blake singing “There is a Tear in My Beer”. Jesse Larson presents the original single “Woman” first in his iTunes recording session then live on the show. The song was written by Chris Stapleton. Adam encourages Jesse to take a risk. Carson thought it was awesome to watch. Adam says he has been doing the show for 12 seasons and asks America to get back to the original intent of the show which is to reward the person with the best “voice”. Jesse is that man.

Aliyah Moulden and Blake are interviewed by Carson. He points out that she is the youngest performer to make it to the finals. She views Blake as a father figure since her father died when she was so young. They review each of her performances on the show and Blake thinks every song has showcased a different side of her talent. She will now perform “Signed, Sealed, Delivered” by Stevie Wonder. Blake thinks this song choice really brings Aliyah full circle and she is the next big pop star. Blake loved her performance. As balloons came down at the end of her performance he thinks it feels like tomorrow night when she wins the whole thing. He encourages America to make it happen by voting for Aliyah.

Lauren Duski records her first original song “Déjà vu” in an iTunes recording session. She wrote the song and sings it on the show. Blake congratulates her in writing her first number one hit song. He doesn’t think in the history of the show he has seen such talent.

Chris Blue is the last performer of the night. Carson interviews he and Alicia. They review all of his performances on the show and Alicia thinks it really has crystalized his talent. Chris will sing “Rhythm Nation” by Janet Jackson. He thanks his fiancée Stephanie again for all of her faith in him. After his performance Alicia tells America they can all join together and vote for Chris. They can say they started his career tonight. Carson reminds everyone to vote to help make one of the four remaining singer’s dream come turn. Tomorrow night one person will be named the winner of the Voice.