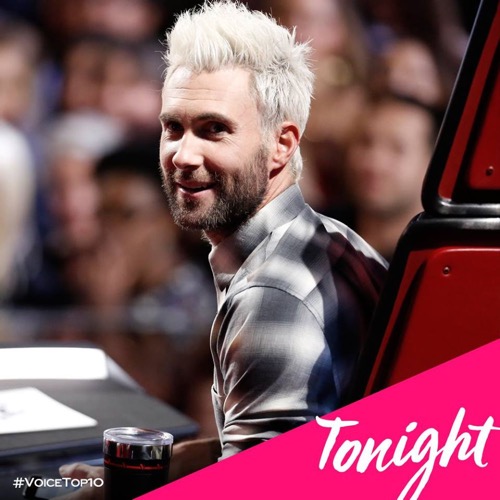 The Top 10 compete tonight and one will go home tomorrow. Carson encourages everyone at home to vote for their favorite. To honor Mother’s Day each singer brings their mother with them to meet their coach. First up is Jessie Larson from Team Adam. He brought his step-mother with him and he thanked her for all of her support throughout his career. Jessie performs Jungle Love. Carson loved the vocals and Blake thought his performance was incredible. Adam argues that Jessie is the most talented guy in the competition.

Team Blake is up next with Aliyah Moulden. She brings her mother and grandmother with her to meet Blake. She is one of his biggest fans. Aliyah will sing Jealous by Labyrinth. This song describes the feelings she has had at times because her father died when she was very young and she is jealous of the time her siblings got to spend with him that she will never had. She cries as she sings as does many of the members of the audience. Gwen thinks her song choice was a great because it showed a different side of her and she connected to the emotion perfectly. Blake is so proud of her. She really poured her heart out.

Vanessa Ferguson for Team Alicia performs next with Doo Wop (That Thing) by Lauryn Hill. Vanessa’s mom is over the moon to meet Alicia. Adam thinks Lauryn Hill is so hard to emulate and Vanessa hit it out of the park. Alicia thinks Vanessa is a poet, vocalist, musician and pianist. She is just the total package with no limits.

Back after his second time on the bottom is Mark Isaiah for Team Adam. Mark’s mom thanks Adam for his support of Mark. He will sing Sign of the Times by Harry Styles. Mark wants to make both Adam and his mom proud. Gwen thinks this song showed a completely different side of Mark and he just keeps getting better. Adam also comments on how much better Mark gets every week and that he is such a hard worker. Adam asks America to vote for Mark.Blake Shelton sings next with Every Time I Hear That Song. He has had five members of

Blake Shelton sings next with Every Time I Hear That Song. He has had five members of team win the voice and 28 number one hits.

Team Alicia has Chris Blue performing 24 Karat Magic by Bruno Mars. Alicia tells Chris’ mom that he is a great guy but his mom gives Alicia permission to give him a whippin’ if he needs one. All the coaches give Chris a standing ovation. Carson says he will not get a whippin’ tonight. Blake has no doubt that Chris will be in the finale for sure. Alicia is super excited for Chris and thinks for such a young guy she can’t believe his talent. He is unstoppable.

The show continues with Lilli Passero from Team Adam. Adam tells Lilli’s mom how proud he is of her. She sings Unforgettable by Nat King Cole. It has never been sung on the show before. Adam reminders her to be very aware of her phrasing as she performs. Alicia loved the touches Lilli added to make the song her own. Adam loved her performance. She made him proud again.

Team Blake has Lauren Duski up and her mom tells Blake that Lauren has been singing since she was very young. She has been Lauren’s biggest supporter. Lauren will perform Tell Me Why by Wynonna Judd. Gwen was wowed. She thinks Lauren is a living Barbie Doll with a guitar. Gwen tells Blake he is such a good coach. Blake tells Lauren she is the missing piece in country music right now and he thinks her momentum can’t be stopped.

Hunter Plake from Team Gwen tells Gwen that his mom taught him to play drums starting when he was just 3 years old. He dedicates his performance of Higher Lover by Steven Winwood to his mom. Gwen is impressed with Hunter’s ability to take a song and make it his own. Adam thinks Hunter really succeeded in taking the song and flipping it into something new. Gwen is impressed with Hunter’s art. She asks the home audience to vote for Hunter.

Team Blake presents TSoul singing At This Moment by Billy Vera and the Beaters. TSoul brings his mother to the show and she thanks Blake for everything he has done for her son. Blake says it is all TSoul. All he has done is given him the spotlight. Alicia was impressed with TSoul’s genuineness and how he gives 300% every time he takes the stage. Blake thinks he has just bought himself a place in the top 8.

Brennley Brown performs for Team Gwen to close out the night. She sings Away by Martina McBride. This is a big week for her because she knows that two people will be cut tomorrow night and she so wants to stay on the show. Gwen encourages Brennley to connect to the song. Brennley’s mom thanks Gwen for encouraging her to be her true self always. Blake found her inspirational and thinks she is a great role model for young people. Gwen admits that she and Blake talk about her often and really think about what will be the best songs for her to sing on the show.