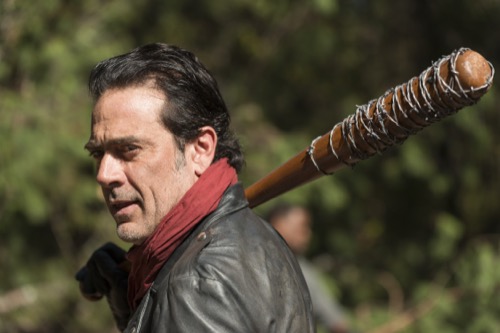 Tonight on AMC our favorite show The Walking Dead airs with an all-new Sunday,  April 2, 2017, episode and we have your The Walking Dead recap below.  On tonight’s The Walking Dead Season 7 episode 16 finale called, “The stakes keep mounting higher and higher as different stories clash, while the group enacts an intricate plan.”

Sasha is in her cell listening to music on her ear buds crying. She passes out. She wakes up on a couch by Abraham. She kisses him passionately. He tells her that Maggie is in trouble. He is going to go with Rick to take her to the hilltop doctor. She asks him not to go. Her cell door opens. It’s Negan with a silver platter. It’s her night tonight. She is going to help them. Together, Negan tells her that it is a big day. They are going to help solve some shit. She wants to know what he needs from her.

Dwight is on his knees. Rick has a gun pointed on him. Why does he want to help them? He explains that he wants Negan dead, he wants it all to stop. Tara explains that he killed Denise, their friend, a doctor. Daryl jumps forward and puts a knife between his eyes. Tara tells him to kill him. Do it, she yells repeatedly. Daryl takes the knife away. Dwight explains that Negan is coming soon, tomorrow. Three trucks, 20 saviors. Dwight says that he can slow the saviors down. Buy them sometime. Then the crew can kill the saviors and get in their trucks. He can lead them to them to the sanctuary to get inside, kill negan and get Sasha. They agree to Dwight’s plan and let him go. Daryl tells Rick that he will kill Dwight real slow if he is lying.

Sasha is back on the couch with Abraham. She tells him she had a dream that he died. She is back in her cell with Negan. He has told her the plan. That’s what he needs from her. Lucille will get her three. Sasha begins to cry. She tells him she can do it but no one has to die. Negan says ‘no’. Punishment is mandatory. She repeats, no one has to die. Negan offers her an alternative, just one person has to die, not three. She agrees to just one person. He jokes – you have me wrapped around your finger. He tells her they leave in 45 minutes.

Maggie goes through the run down. They don’t have the Oceanside, Gregory is gone and she wants to lead Hilltop over to fight. Jesus is glad Maggie is making the tough decisions.

Carol, Ezekiel, Morgan and a few others are suited up and walking the streets with their weapons. They see a roadblock of grocery carts again. They stop to talk. Morgan wants the saviors dead. He wants to go off on his own. Ezekiel talks to him. He wants Morgan to fight with them, as a team. Morgan is wearing Benjamin’s armor. He is quiet and feels stuck.

The garbage people show up at Alexandria. Daryl, Sasha and Aaron work in the back of a truck to wire bombs. Negan, Eugene and the saviors are in the road trying to clean up fallen trees. Tara and the garbage people create roadblocks with cars. Michonne readies one of the garbage female fighters with ammo. They scope out their spots for a good shot.

Sasha is back in what appears to be her cell listening to smooth jazz. She is talking to Abraham again. He explains that she needs to know what is going to happen. That they are going to hit the road, kick some stuff and eat some snakes. He asks her how he died in her dream. She tells him that he drowned at the beach. She wants to stay behind. She wants him to stay behind. Sit this one out.

Eugene is walking Sasha down the hall. He is glad she didn’t take the pills. She will adjust. She tells him she won’t.

Rick and the crew of fighters get in their positions. Sasha tells them that the walls will hold. The saviors roll in with Eugene speaking over a megaphone. He warns them all that compliance is the only way. The jig is up. He asks Rick if he will comply. Rick asks – where’s Negan. Eugene responds, I am Negan. Rick looks to the sky. Rosita hits the button to detonate the bomb. They all get down, Nothing happens. The leader of the garbage people pull their guns out and aim at Rick and the crew.

Negan roles up with Lucille. He tells them to put the guns down. The garbage leader explains that she made a better deal with the Saviors. Negan calls them all animals. He tells Dwight and Simon to get the casket on the bed of the truck. He tells them that they might not like Eugene, but they must like Sasha. He explains that Sasha is in the casket and she is alive. He wants all of their guns and their food as well as a person of his choosing for Lucille. He also wants Daryl back and the pool table. And he wants it now or Sasha dies. Rick wants to see her. Negan knocks on the casket with Lucille.

Back to Sasha talking to Abraham. She tells him it felt real. Like they just started. They kiss gently. Abraham stands and hugs her. She tells him to wait when he tells her, come on. He explains that if they both know they are going to kick there is a point to all of this, the people they love. Maggie she is carrying the future. She tells him he is right. They get their things together to go.

Eugene walks Sasha outside. He hands her an iPod for her travels. She asks Negan for a little bottle of water. She will make it in the casket during the trip. She just wants to go to sleep. She plays the song We Will All Be Free as she looks at the pill Eugene gave her. She takes it.

Negan opens the casket. She is a walker. She walks him off the truck. He falls. They all open fire. Sasha is on top of Negan. A savior flings her off. She falls on him and bites him. The garbage leader has her gun on Rick still. He asks her to agree on a new deal. She says no and shoots him in his right side.

Negan makes Rick and Carl kneel in the field. Rick begins to cry. Sobs and yells come down the street. Someone has been killed. Negan tells Rick that he is going to kill Carl now. And then he is going to take Rick’s hands. Rick tells him that he is going to kill him. Maybe not today, maybe not tomorrow, but he will kill all of them. He can take Rick’s hands in front of him right now. Negan takes off Carl’s hat. Shiva comes out of nowhere and takes out a savior. Carol, Ezekiel and the crew come out and start shooting. Shiva takes another savior down. Morgan takes a few out with his staff. Maggie is firing too. The garbage people start throwing bombs. Smoke envelops them all. Ezekiel commands – “Now we finish this.” The fighters scatter. Some of them have locked Rick and the crew inside Alexandria. Daryl gets on top of the wall. They all left.

Rick finds Michonne. She is bloody and leaning up against a door inside the house. She is alive. She tries to speak. Rick hugs her. Negan and his men make it to the sanctuary. Negan asks Eugene how Sasha died in the box. He tells him she ran out of air. He gets close to Eugene’s face. “Maybe,” he responds. He walks out on to the building ledge and tells his people to get ready to fight.

Rick and their people take stalk of Alexandria. Jesus and Maggie find Sasha wandering around as a walker. Jesus takes her down gently. Maggie watches on as she cries. They all retreat to the streets of Alexandria to enjoy some down time. Aaron passes out apples. Carol and Morgan sit side by side on a front step. Michonne rests in bed with Rick by her side. Rosita is in the other bed with Tara by her side. Daryl locks the gates and finds a little soldier figurine with the words “didn’t know” on the back in black ink.