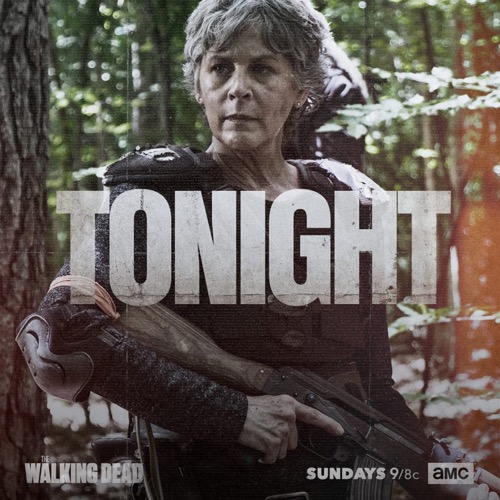 Tonight on AMC our favorite show The Walking Dead airs with an all-new Sunday,  October 29, 2017, episode and we have your The Walking Dead recap below.  On tonight’s The Walking Dead Season 8 episode 2 called,  “The Damned,” as per the AMC synopsis, “The plan involving Alexandrians, Kingdommers and Hilltoppers unfolds. As Rick continues to fight, he encounters a familiar face.”

The Walking Dead (TWD) begins tonight with everyone working together, preparing weapons and food for the impending battle. Suddenly, the armored cars arrive with their second assault on the Saviors. Morgan (Lennie James), Jesus (Tom Payne) and Tara (Alannah Masterson) are not surprised to see the Saviors have surrounded themselves with a moat full of walkers; Dianne (Kerry Cahill) says she just needs a clear shot so Morgan feels they just to wait for good timing, Morgan instructs Dianne to not let them get a shot off.

Meanwhile, Carol (Melissa McBride), and Ezekiel (Khary Payton) struggle to get up from the ground after the cloud of white smoke settles and they are surrounded by walkers; Ezekiel orders his people to protect themselves. Carol wants to know where he went, worrying if he goes back to tell the others it is over before it began. Ezekiel tells her to trust the king, he tells his comrades to regroup and prepare and if they haven’t done so already, release Shiva from her cage. He says they will leave a trail for them and for no enemies to remain, telling them they are off to the compound and certain victory.

Rick (Andrew Lincoln), Daryl (Norman Reedus) arrive with the others, shooting down the guards as they enter the main house; they are in search of the guns, telling them to signal the others they are inside. Outside, Aaron (Ross Marquand) and his group continue to battle it out with the Saviors.

Morgan rattles the fences to gather the attention of the walkers, so Dianne can kill the men guarding the grounds with her arrows. Tara and Jesus shoot several men until Morgan and Dianne join them, they call in their group and begin to scour the building. Inside, Morgan and a couple men, find a room where people are inside but wait outside the door. Rick and Daryl find no one on the main floor and believe they need to go up higher to find who they are looking for; Daryl attempts to kick in the door going upstairs.

Aaron says through the gunfire, the plan is to pin all the Saviors inside and to not let them through. The group inside, line themselves at all the doors and wait for Jesus’ command to open the doors. Jesus gives the order, but Morgan hesitates. When he opens the door, the men inside shoot back, and Morgan’s men go down.

Rick and Daryl are on the last floor; Daryl suggests they split up to find the guns quicker. Jesus and Tara open one of the doors and find a man named Dean, who peed his pants. Jesus tells Tara to wait as they have a job to do. Jesus tells her to check out what is happening in the hallway; she learns they are missing some of the people from the other team – including Morgan. Dianne tells Tara to stay in the room until it is clear.

Tara returns to the room and wants to take care of Dean, but Jesus says he won’t shoot a man with his hands up. Jesus says this isn’t about revenge and the killing of her girlfriend. Dean gets the gun from Jesus, crushes the bottle of prenatal pills, saying Maggie (Lauren Cohan) and her kid will die anyway. He taunts Tara, saying he isn’t a tough guy, but before he can finish, Jesus headbutts him and pulls another gun on him. Tara says it is not about revenge; it’s about getting it done. Jesus knocks him out and ties him up, saying Maggie will listen to what he has to say. Dianne calls them out, saying the Saviors are falling back and Jesus leads them to another way out. Morgan and his men are lying motionless on the ground.

Morgan suddenly opens his eyes and looks at the men beside him after the hallway is suddenly empty. He slowly gets up, cocks his gun and marches down the hall.

Suddenly the woman leading the Saviors realizes that they didn’t have to move in on them when she sees her men turning into walkers. Aaron sees that they have accomplished what they needed, and calls his people back.

Carol, Ezekiel and the Kingdommers realize that if they made it to the compound, he will be ready. Carol says that what is about to happen, isn’t just a few walkers. Ezekiel says he still smiles, saying he is king because he has provided a light to lead his people forward. She says all of them might not make it, or even win but he says he will continue to smile because there will be no fantasies of failure today. They find some blood, meaning he is wounded and moving slower; Ezekiel tells them to move forward.

Daryl walks through several rooms and finds some food on the ground, handcuffs attached to a pipe and blood as Rick continues down a dark hallway. He opens door by door until a man attacks him out of nowhere. He demands to know where the guns are, choking out the man and throwing him into a spike in the wall.

Morgan angrily walks down the hallways, as he remembers Rick’s words, shooting anyone in sight. Jesus orders his group to have their guns up but only to fire if they fire first. Suddenly a man opens a huge garage-type door, he puts down his gun telling everyone they are surrounded. Tara is furious with Jesus, and says they can do it the hard way because even if Maggie listens to Jesus, Rick will listen to her! The Saviors lower their guns and come out with their hands up as Morgan continues to shoot everyone on his way out.

Morgan finally comes outside to see Jesus and their group pointing their guns at the Saviors inside. He remembers Rick saying, “we need to come for them before they come for us and not leave them alive.” Morgan approaches one of the men to kill him but Jesus tells him to lower his gun; Morgan says they are supposed to kill them, that is what they came for. Tara shakes her head as Morgan walks off.

Rick comes into a room that is a nursery. He finds a dead baby girl, named Gracie in the crib; he looks up in the mirror and covers his eyes. Carol leads Ezekiel and his people, but before she can start shooting, he tells her to save her ammunition as their friends have arrived. Just then, Shiva begins ripping people apart.

The gunfire continues between Aaron, his people, and the Saviors. Aaron runs several of them over with a car then rushes over to Eric, who has been badly wounded. Ezekiel, pets Shiva saying he isn’t glad for anyone’s death; Carol knows. He says their journey will not end in retreat, raises his sword and smiles even though he knows they are coming.

Rick continues to check out each room, he finds a photo and is in shock. A man raises his gun and tells him to turn around slowly. Rick turns as he says “hi” to Rick. Rick says his name is Morales and he was in Atlanta. Morales says that was a long time ago and it is over. He called the Saviors back and they are coming. Rick just stares at him. Daryl looks on, as Aaron continues to help Eric escape. Morgan and Jesus walk on as Tara walks solemnly. Ezekiel smiles as he walks with Carol, who looks very determined.

Rick stares at Morales as he cocks his gun.