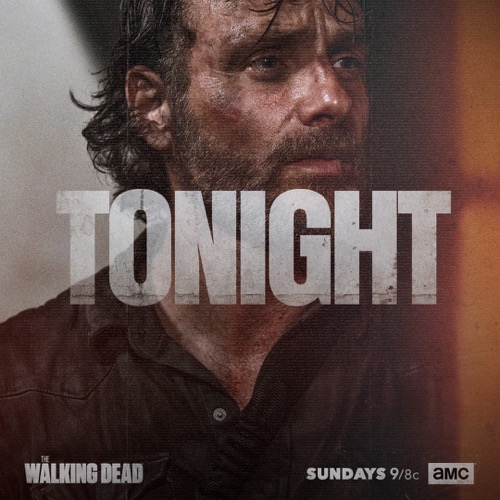 Tonight on AMC our favorite show The Walking Dead airs on an all-new Sunday,  November 26, 2017, episode and we have your The Walking Dead recap below.  On tonight’s The Walking Dead Season 8 episode 6 called, “The King, the Widow, and Rick,” as per the AMC synopsis, “With things looking up for Rick’s group, an argument breaks out at the Hilltop. The consequences of the decision are life versus death.”

Rick is walking down the road and retrieves two messages from a box. Meanwhile, Carol is cleaning her gun when she receives two messages, Maggie also receives messages – Rick says everything is going according to plan even though they’ve all lost some loved ones. The messages are all from each other, updating on what has been going on. Rick says, that by the time it was over, there were no Saviours left standing. Maggie says, Jesus took prisoners and took them back home, until they decide what to do with them.

Rick admits it is scarier than what he thought it would be but the plan is still a go – the sanctuary is surrounded and cut off from their supplies, every hour that goes by makes them weaker – everyone is to meet up in 2 days. We see Jadis in the junkyard and her people, there is a huge container and someone is banging on the inside. Jesus is giving the prisoners water and food when Maggie sees him and is upset that he is giving away their supplies. Gregory tells Maggie that they should just kill all the prisoners. Maggie stands off and walks away.

Carol goes to visit Ezekiel and tells him to get ready, they have to gather everyone who can fight so they can go meet Rick in 2 days. At the junkyard, Rick is there, he tells Jadis that he wants a deal. Jadis is surprised, she thought she killed him. Rick says that they all need each other and he would rather work with them than take over their place. Rick shows some photos and tells everyone that the Saviors are finished. He goes on to tell them to switch sides and be a part of the next world that Alexandria, the Hilltop, and the Kingdom built together. Or, Rick and his people will destroy them.

Jadis says no. Gregory and Maggie are talking, he tells her that everything he did was pure and for his people. – he goes on to say that you can’t have wolves amongst the sheep. Michonne gets in the car to head out and Rosita jumps in the car and won’t let her go alone. Meanwhile, Daryl and Tara are talking and she tells him that is right when he didn’t kill Dwight and they wouldn’t have gotten that far without him. She then says when all is said and done, she is going to kill Dwight. It’s nighttime, Jesus is near the gate when one of the Survivors start talking to him – Jesus tells him to stop.

Michonne and Tara are in the car, but Rosita is now driving and asks Michonne why she had to go out. Michonne says that sirens have been going off in her head, she can’t turn them off because she helped get this started and she just needs to see it so she can turn the alarms off and go back home. Michonne hears singing and tells Rosita to stop the car – the two venture into the woods and happen upon a building where the signing seems to be coming from. Carl meets up with a man whose name is Saddiq, he offers him food and water.

The guy is suspicious, Carl explains that his mother always told him it was the right thing to do. Carl asks him how many walkers he has killed, he says 137. Carl asks how many people he has killed, he says 1 because the walker tried to kill him and they didn’t. Carol finds Henry in the woods and he wants to join the fight. Back home Jesus still keeps a watch on the Saviors when Maggie orders for them to be put in a cage and says they will be fed and cared for as long as they don’t cause problems. All of a sudden, Maggie orders for Gregory to be put in as well and calls him a wolf in sheep’s clothing. We see Carl and Siddiq again, they happen upon some walkers feeding on an animal – all of a sudden more walkers come upon them and Siddiq saves Carl’s life. Carl tells Siddiq that he has now responsible for him, that is how it works.

Michonne and Rosita are inside the building, they hear voices; a man and a woman. Gunfire erupts, then whistling. The woman starts fighting with Michonne who is still very weak. The guy tries to run and Rosita blows him away. The woman tries to run off in a truck and Daryl with Tara come from another direction and drive into the vehicle, then Daryl shoots the woman dead. Carol is back to see Ezekiel – he tells her that he knows what she wants from him but he can’t, he asks her to please leave him alone.

Carol then asks him why he kept going to visit her, he says it was his duty, then he says that she made him feel real, not a fiction. Carol tells him that he is real, the people need their king to lead them. Ezekiel says she can lead, but she says no, it has to be him because he was the one to inspire them from the beginning. Jesus tells Maggie that she did the right thing by locking up the Saviors. Enid and Arron head out. Back at the junkyard, we see Rick inside the container and he’s naked.