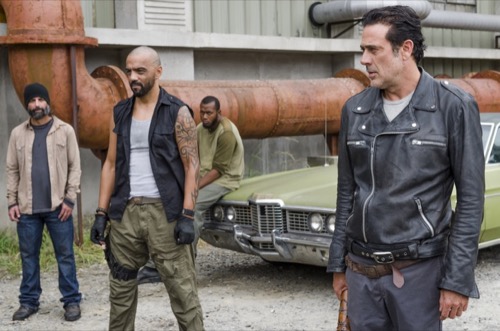 Tonight on AMC our favorite show The Walking Dead airs with an all-new Sunday,  February 26, 2017, episode and we have your The Walking Dead recap below.  On tonight’s The Walking Dead Season 7 episode 11 called, “Hostiles and Calamities,” as per the AMC synopsis, “An Alexandrian must navigate the mysterious world within the Saviors’ compound.”

The saviors return to their home with Eugene. They pull the black bag off of his head and lead him to a room. He is crying but calms a bit when he sees what is behind the door. The savior tells him about their library. She asks him about Daryl. Does he know where he is. She asks him what he wants to eat. He requests lobster. They don’t have lobster. He asks for pasta with sauce and pickles. She leaves. He locks the door. Checks the fridge. There is food and beer. He plays the stereo, it plays Easy Street.

Wade is in his room looking at a note. There is a knock at the door. It’s Negan and his men. They come in and begin beating him as Negan watches from the door. Wade is put in a cell. Negan talks to him through the door. Sherry is gone, she left a few hours after Daryl, who someone opened the door for. Wade tells Negan that Sherry didn’t open the door for Daryl. Negan wants to know if Wade changed his stripes. Negan opens the door. Negan wants to know where Sherry went, he wants Wade to sort it all out.

Wade gets stitched up by the doctor. They talk about Sherry and her big heart. How she married Negan to save him. Wade goes back to his room. He grabs his things and takes off on his bike. Eugene is brought on a tour and told about the point system. He is brought to Negan, who calls him the man of the hour. Eugene reminds him of who Lucille is. Eugene cries. Negan wants to know what he knows. Eugene tells him about finding the bullet shop, how he reads and the like. Negan calls him an asshole. Eugene tells him he is not an asshole, he has a number of degrees and he is a doctor. Negan wants to know how to keep all of the walkers that guard his perimeter on their feet. Eugene tells him how metals can bond the walkers to the fence while keeping them intact when it comes to hostiles and calamities. As repayment, Negan is going to send some of his wives over to visit Eugene.

Eugene plays video games while Negan’s wives all hang out watching him. One of Negan’s wives offer him a massage. He declines. They want to talk to Eugene about the Human Genome Project. They talk about how to make a bomb. They all go outside after grabbing materials to make a bomb. Eugene shows them what he can do. They all clap and laugh.

Dwight pulls his bike up to a house. He gets out and yells honey. He finds a photo of him and Sherry in the drive. He goes through the house. He finds a letter from Sherry with her rings. He reads her goodbye note. He pockets the rings as he cries.

The wives show up at Eugene’s door. He thought their night was singular, a one-time engagement. They need his help. Amber, one of the wives wants to end her life. Amber wants to go to sleep and not wake up. He wants to know how much she weighs.

Eugene tries to cut the line to get a cold capsule. The lady tells him to get back in line. Eugene uses his number to get what he wants. She turns them over after apologizing. He leaves the line smiling. In his room he gets to work.

Dwight is back with the Saviors doctor. He tells him that he found his ex-wife. He killed her.

Eugene arrives to one of Negan’s community meetings. Negan tells Eugene to pay close attention. Negan attacks the doctor. He had a note from Sherry. He helped her. The doctor says that Dwight is lying. He begs for Negan not to hurt him. Negan puts the hot poker down, but quickly pushes him into the fire.

Eugene is playing his video games. The wives show up. They want to know about the pills. He won’t give them the pills. He knows the pills are for Negan. They will tell Negan that it was his idea. He tells them there is no way that Negan would believe them over him. They call him a coward, he tells them they ae correct. They leave. There is a knock at his door. It’s Negan.

Negan wants to know how Eugene likes it here. Eugene is quiet. Negan needs Eugene to get on the right team, he doesn’t need to be scared. He just needs to know who he is? Eugene replies, I am Negan.

Next day, Eugene is in the yard giving orders. He warns them to be careful with the molten metal.