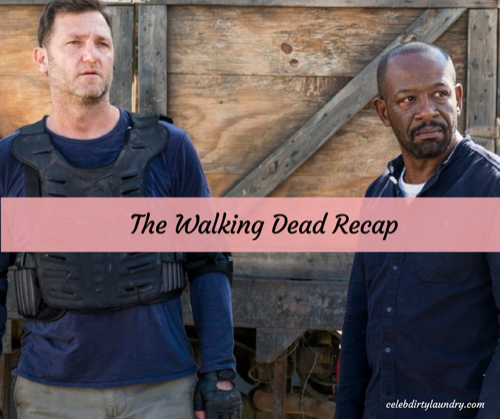 Tonight on AMC our favorite show The Walking Dead airs with an all-new Sunday,  March 5, 2017, episode and we have your The Walking Dead recap below.  On tonight’s The Walking Dead Season 7 episode 13 called, “Bury Me Here,” as per the AMC synopsis, “Keeping with the routine supply drop-off, a group of Kingdommers deliver goods to the Saviors, but things don’t go as planned.”

It’s night, Carol lights a candle. She is having trouble sleeping. The next day, Morgan is training a boy with a stick. Carol leaves her house. She arrives at the Kingdom. She wants to see Morgan. She asks him – why did Jesus bring Daryl and the others to the Kingdom? She wants answers. Is everyone okay? Morgan tells her that he will go with her to Alexandria if she wants to make the trip but it is between her and them. He kept her whereabouts a secret. She cries. He asks her if she found what she wanted when she got away, when she lived alone. Morgan will leave right now. She walks away and leaves the Kingdom. Benjamin wants to walk her. She tells him no. On the road she senses she isn’t alone.

Ezekiel watches overhead as his people live and laugh. Nabila pays him a visit. The garden has weevils. They have to take it all out and rip it down.

Richards talks to Morgan. They can’t go on like this.

The Kingdom gets there melons together and other supplies to meet with the Saviors. On their way they come across a barricade of shopping carts. Someone blocked the road. They stop the truck and get out with their guns at the ready. They circle around the area and discover a grave freshly dug with a message – bury me here. They all pause for a moment and look with sadness.

They meet with the saviors. They are late. The saviors hit one of their men. They want the offering and their guns. Ezekiel and all the men raise their guns. Ezekiel will give them the guns for Morgan’s stick. Morgan tells them its fine. The saviors take notice, their offering is short. Ezekiel will give them twice the tribute in an hour. They don’t care, they want it now. One of them raises a gun to Richard’s forehead. He steps forward. He tells him to do it. The man shoots. Benjamin has been shot. Morgan tries to help him while Ezekiel tries to get them to let them leave. Richard stands in shock. They head to Carol’s. She has medical supplies.

They get him into Carols’. He tells Morgan – to injure an opponent is to injure yourself. Benjamin bleeds out and dies. They all stand in the room staring in shock. Morgan is angry.  He leaves. He walks the streets, screaming angry. He thinks about slitting his wrists.

Morgan kicks a crate on the side of the road. The melon they were short rolls out. He has a flashback of Richard directing Benjamin to get his gun out.

Morgan brings the crate to Richard’s room to confront him. Richard tells him that it was supposed to be him. He was going to give his life. It wasn’t supposed to happen like this. Morgan stays silent. Richard recalls that he was at a camp when the outbreak happened. He did nothing. He lost his wife and his little girl. Because he waited. Richard begs Morgan to listen – he wants to gain the saviors trust and then team up with the others to take them out. He has to kill or kill himself. Richard is going to talk to Ezekiel and tell everyone what he did. He will spend the rest of his life making up for it.

Morgan sees Ezekiel comfort Benjamin’s brother. He ponders what to do. The next day, they drive to meet the saviors with the one melon. Morgan asks Richard if he confessed yet. Richard wants to do it later. Ezekiel overhears, he wants to talk now. Morgan finds his stick and Benjamin’s with the blood. The saviors arrive. The lead savior Gavin asks how the kid is. No one answers.

He determines that he is dead. He tells the other savior to start walking home. Morgan loses it and attacks Richard, He chokes him out on the pavement before bashing his head against the tar. They all sit there and watch as he kills Richard. He tells them all about Richard and how he set it all up. Morgan tells Gavin that he knows that they need to comply and they need to go on. He earns their trust. Morgan tells Ezekiel and the others that Dwayne died because…he means Benjamin. They notice his slip up and offer him a shoulder. He tells them to leave. To leave him alone. They get in the truck and take off.

Morgan drags Richard’s body to the grave they found earlier. He finds the backpack that Richard was holding earlier with the name Katey on it. He knocks on Carol’s door. He tells her he strangled Richard. He got Benjamin killed. He tells her Glenn and Abraham are dead. Negan beat them with a bat. Olivia, Spencer, and more. They are dead. He leaves. Carol asks him – where is he going. He is going to kill them one by one. She begs him to stay.

Carol pays a visit to the Kingdom. Ezekiel is planting in the garden. He says she is sorry. She wants to stay in the Kingdom. They have to get ready. They have to fight. Ezekiel agrees, they do, but not today. They plant with Benjamin’s little brother.

Morgan is sharpening his stick at Carol’s on the front porch.