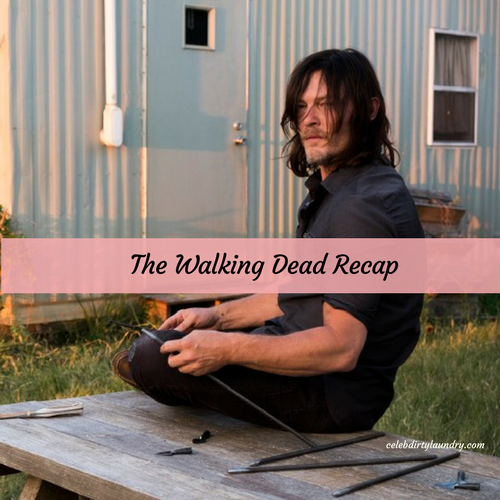 Tonight on AMC our favorite show The Walking Dead airs with an all-new Sunday,  March 19, 2017, episode and we have your The Walking Dead recap below.  On tonight’s The Walking Dead Season 7 episode 14 called, “The Other Side,” as per the AMC synopsis, “The Saviors pay an unexpected visit to the Hilltop, catching everyone by surprise. This time, they’re planning on taking more than just supplies.”

The days leading up to the battle are long. Maggie looks hopeful as she practices throwing knives with the others. Sasha sharpens the blade of her knife. Maggie’s ultrasound looks healthy. She is making a list as she eats food prepared by Edith at the table. Sasha practices slashing her knife, teaching the others. Jesus gives Sasha a floor plan of Negan’s factory while Maggie sleeps. Daryl sits outside in the dark sharpening his knife. Maggie comes over and gives him a touching hand. Sasha cries at the grave.

The gang meets at Hilltop. Rosita arrives. She needs Sasha’s help. Maggie thanks Jesus for allowing her to stay in his trailer. He thanks her and Sasha has helped him become an actual part of the community. Maggie leaves to work on putting together riot gear. Sasha sneaks in and tries to take bullets. Jesus and Edith come, interrupting her. He tells her that he knows of her plan to leave with Rosita. He begs her not to go. Edith tells her to tell Maggie. Sasha can’t tell her. Not yet. Jesus and Edith offer to go. She doesn’t want them to. Rosita is going to go without her. She has to go. Jesus tells Sasha that owes Maggie an explanation – the truth and then she can go if she still wants to. Sasha asks Edith to protect Maggie no matter what – she is the future and so is Edith. Sasha gives her a bracelet. It’s for the baby. Edith takes it, but in 10 minutes she is going to tell Maggie what is going on. The watch tower yells – the Saviors are coming. Daryl and Edith run to find Maggie and hide her. Daryl also hides. Rosita and Sasha run for it with their gear.

Gregory lets the saviors in. They are there to pay a quick visit. They are looking for someone.

Rosita and Sasha try to hot wire a car. It doesn’t work. They keep walking. Sasha asks her where she learned to disarm bombs. Rosita explains that she learned from a friend, not Spencer. She doesn’t want to play get to know you games. Sasha tells her what she learned from Jesus. They start arguing about what to do and where to shoot from.

Edith tries to slow down one of the saviors with a basket of veggies. He tells her to load them in the truck. He wants her knife too. He makes his way into the bulkhead where Daryl and Maggie are hiding. He looks around. They are ready.

The saviors want the Hilltop’s doctor. They are there to take him back after Dwight killed their doctor. Gregory wants to talk to Simon, alone. Gregory explains that he needs to hold on to his people’s trust. He is concerned that they are taking his doctor. Simon tells Gregory that he needs to tell him these things. He can come visit Simon and they can work it out. Drink tequila. He is still taking their doctor.

The savior moves around the bulkhead. Daryl moves forward, ready to lunge. Maggie stops him. He doesn’t see them. He leaves after touching a few boxes. Maggie asks Daryl why he won’t talk to her, look at her. He cries and apologizes. Maggie tells him it wasn’t his fault. “It was,” Daryl tells her. Maggie knows he is good, Glenn thought so too. She wants to kill them all, watch them die. She needs him to help her win. She hugs him. The saviors get in the truck and leave with the doctor.

Rosita and Sasha see a group of fenced in walkers. They set a car on fire to lure them while they climb the fence. They hot wire another car. Jump in and go.

Rosita and Sasha are camped out in the warehouse. They are waiting for Negan to come out. Rosita teaches Sasha how to make a knot. They see Eugene outside, directing people in the yard with the walkers. Rosita tells Sasha how she learned how to do it all. Once a guy taught her something, she moved on. Not with Abraham, though. He was different. Rosita was so confused when Abraham was unsure, but when he was okay, she wasn’t happy. She hated Sasha. She blamed her for that. But it was really because she didn’t figure her own shit out, and he did first. Sasha explains that she was happy with Abraham. Rosita is happy to hear it. They promise to have each other’s backs no matter what.

They hear a truck and look out the window. They see Dr. Carson being brought in. They see Negan welcoming him. Sasha tries to get a clean shot. But she can’t, he is too close to Eugene and Carson. He leaves the area. They hear Eugene on the radio. He reports that he needs walkers stat and that Negan will be busy in the boudoir. All questions can be directed to him. Sasha and Rosita decide that they are going in.

Jesus is called by Gregory. He doesn’t want so many people in Jesus’ trailer. The others also need to chip in. Jesus feels threatened. Gregory makes clear that they aren’t friends, he looks out for his friends. Daryl sees Jesus outside the room. He wants to know where Rosita and Sasha are.

Its night, Rosita and Sasha rush to the gate. They see Eugene and tell him that they are there to break him out. He doesn’t want to go. He runs away and goes inside. The cut the fence. Sasha slips inside and locks herself in. She tells Rosita to go. The others need her. Sasha runs off and inside.