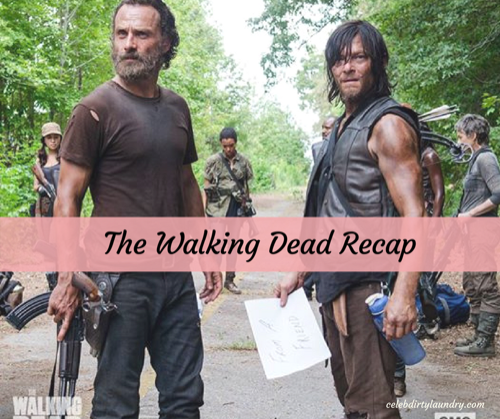 Tonight on AMC our favorite show The Walking Dead airs with an all-new Sunday,  March 5, 2017, episode and we have your The Walking Dead recap below.  On tonight’s The Walking Dead Season 7 episode 12 called, “Say Yes,” as per the AMC synopsis, “Members of the group scavenge for supplies. Meanwhile, back in Alexandria, someone must make a morally challenging decision.”

We see Michonne and Rick by a campfire, then a flashback to them entering a house and gathering items. All of sudden Rick and Michonne are on the floor and making out. Back to the campfire and it’s the next morning, Michonne thanks Rick for watching out the night before and wants to know if they are going to win today, he says, “Oh Yeah.” Rick and Michonne continue their road trip to look for loot, but make sure to get in lots of time to make out. They are a couple of days out and Rick wishes they would have gotten more loot.

Rick and Michonne happen upon some guys by the road, but don’t make themselves seen, they steal some of their stuff. Michonne is eager to head back to everyone, but Rick wants them to stay out for another day or so.

Tara heads over to help Rosita with something and tries at the same time to give her encouragement that everything is going to work out. Rosita has no confidence that they will be able to fight Negan because she doesn’t think they will find enough guns. Tara gives Rosita some cream to help with her scar, but Rosita won’t take it, she says she is going out to look for guns.

Back to Michonne and Rick, Michonne sees a deer and goes for her gun. Rick awakens and gets out of the vehicle to help Michonne, he says he owes her a deer. The two look off to the distance and notice a building behind a fence. Behind the fence there is a walker, Michonne kills it. Rick and Michonne make their way over the fence and take a look around.

Meanwhile, Rosita is out on her own. She finds a building and a gun on the floor attracts her to the doorway, but after killing a walker to get in, she realizes it is a toy gun.

Michonne and Rick are still looking around, they are now on the roof of the building to get a good look around and survey the area. It is a fairground, there are tons of walkers, many are still holding their guns and Rick says this is it, Michonne agrees.

All of a sudden, Rick and MIchonne fall through the roof and you can hear someone laughing.

Rick and Michonne are fine, they fell through the roof but are laughing because they found lots of skids full of food ready to eat.

Rosita is back, she visits Morgan and tells him that she was out all day and she didn’t find one gun. Then she says she had a gun and was going to kill Negan, but she was stopped and she wish she did even if she had died doing it. She feels that many people would be still alive if she wasn’t stupid enough to listen to Morgan.

Morgan is calm, Rosita says he knows nothing about anything. Morgan says that they need her and if it is his fault that she is alive, then he will just have to live with that.

Rick tells Michonne that they don’t have to rush back, he wants to hang out with her for a while longer, alone.

It is late, Rick is keeping watch while Michonne sleeps. He puts his head in his hands.

Tara takes off her bracelet with the shells on it, she gives it to Judith and tells her that someone gave to her that was special to her, that saved her life. She continues to talk to Judith like she can understand her, but Judith is just a toddler.

It’s the next day, both Rick and Michonne are out and ready to kill the walkers to secure the area so they can get the weapons.

Rick and Michonne start, one by one they take out walkers. Rick tries to pull a boot off one walker to get him out of the windshield of a car and the body just starts ripping apart. Rick gets the guy out and they both are in the car hiding out, Rick tells her he thinks they over estimated what they could do. Rick pops the sunroof and they both get out of the car. They hop off, over a fence to safety. They continue killing them but soon the fence doesn’t hold and the walkers are coming after them. Rick and Michonne run as fast as they can and try to build a barrier that the walkers can’t pass, but no luck. There are so many, Rick continues to kill them and Michonne as well. Rick climbs high on one of the structures, to get a better look at the deer. All of a sudden, Rick falls onto the ground and scrambles to find his gun.

He shoots some of the walkers but he is clearly out numbered. Michonne is freaking out, she sees Rick on the ground and the walkers are feasting, she thinks it is on him and looks like she is going to faint. She drops her weapon and looks at the walkers with fresh blood all over their faces then struggles to see if Rick is alive, he is. He jumps out of this enclosed area and throws Michonne her weapon, she grabs it and kills the rest of the walkers. It was the deer that the walkers feasted on.

Now we see Michonne and Rick collecting all the weapons they can.

Rick and Michonne leave, they are all packed up with supplies and ammunition. Rick stops the vehicle and tells Michonne that he would have liked if they had gone a couple more days. He admits that he has been having trouble sleeping, thinking about their friends and how much they have lost. Rick tells her that they are going to fight and they might lose people, maybe even each other, but it will be worth it. Michonne cries that she can’t lose him. Rick tries to encourage her that if either one of them go, the other will have to be strong and lead the group.

Rick and Michonne bring the weapons and supplies to Jadis, there are 63 and she tells Rick that there is not enough. Finally after some back and forth between she and Rick, she tells him they can keep 20 guns but need to keep more.

Rick is looking for Rosita, he asks Tara who says she doesn’t know but has something to tell him.

Meanwhile, Rosita meets with Sasha and they talk about killing Negan. Rosita tells her that Rick and Michonne founds guns but they can’t move because they don’t have enough yet; they need more people, more time, more excuses. Rosita says that she memorized everything Daryl and Carol told Rick about the inside of Negan’s place, Sasha says she has a map of the outside. They agree they can’t be caught alive if they are going to do this