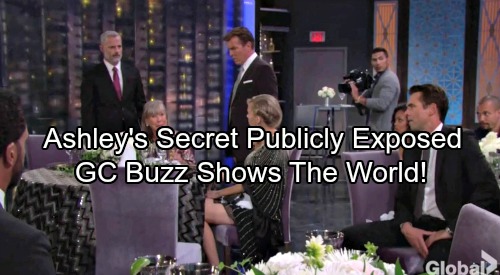 The Young and the Restless spoilers documented the lead-in to Ashley’s (Eileen Davidson) paternity being publicly revealed. A small handful of people have known this genetic secret for decades. But GC Buzz served as the outlet that exposed this fact – Ashley is Brent Davis’ (Bert Kramer) daughter, instead of John Abbott’s (Jerry Douglas).

Hilary (Mishael Morgan) embraces the title of Gossip Queen. But she isn’t to blame in this instance. Jack (Peter Bergman) invited her to cover the celebratory event he booked at the Top of the Tower to honor Ashley.

In winning the 2017 Innovator of the Year Award, Ashley joined the man she considers to be her father. John earned the same honor years ago when he was building Jabot into a leading cosmetics company. Of course, John didn’t know at the time and never learned that Ashley wasn’t his actual daughter.

Dina (Marla Adams) felt it would break her husband’s heart if he ever learned that she had a child through Brent. That happened when Dina was fooling around with GC’s erudite tennis pro. That tag references Brent’s athletic prowess, rather than his high standing in any other area.

Ashley was told this devastating truth by her mother in the mid-1980’s. She agreed with Dina and kept the information from John.

Brent was married to Myrna (Marcia Rodd) back in the day, which was prior to Y&R’s debut in 1973. As in the past, today’s arc has been written to extend the backstory of Davidson’s character and others.

Dina recently admitted to Graham (Max Shippee) that Ashley wasn’t John’s daughter, while also insisting that he remain discrete. That tactical mistake isn’t one Dina could have known she made because of the skillful acting performance Graham has offered to-date.

Y&R viewers were told that Graham had actually been an actor prior to joining the Mergeron corporation. He’s used that skill to snow Dina based upon his mother’s instructions.

Myrna hates Adams’ character for having broken up her family and has been using Graham as a weapon to secretly undercut her. The goal is to destroy Dina’s relationship with her children, which would be seen as payback for her decades-old offenses.

Attacking others doesn’t heal past wounds. That’s the logical flaw in all revenge-seeker’s arguments. Hopefully, the Abbott clan channels John’s kindness as it responds to this shock and is able to move forward together. CDL is a leading source for everything linked to The Young and the Restless. Check back regularly for Y&R spoilers and news!