The Young and the Restless Spoilers: Billy Takes Phyllis On Wild Thanksgiving Adventure – Philly’s Back On 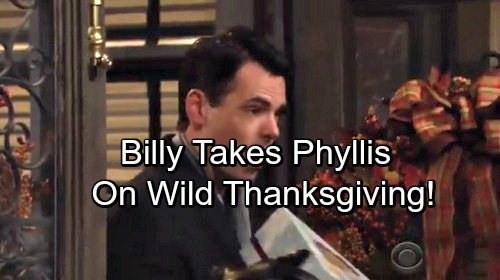 The Young and the Restless (Y&R) spoilers tease that Billy (Jason Thompson) will be a man with a plan. He’s determined to win back Phyllis (Gina Tognoni) and he’ll hope he has a way to pull it off. However, Phyllis will have a plan as well and it certainly won’t include Billy. She’ll try to put Billy out of her mind as she prepares for Thanksgiving.

Phyllis will decide there’s really no comfortable place for her on this holiday. Likewise, Hilary (Mishael Morgan) won’t have a group she can gather with. The Young and the Restless spoilers say Phyllis and Hilary will have a private ladies’ night instead. They’ll intend to put their own spin on Thanksgiving.

Many Y&R fans are enjoying Hilary and Phyllis’ friendship. They’re both schemers at heart, so that’s probably why they get along so well. Phyllis will eventually meet up with Hilary and get their mini party started. There’s a good chance they’ll settle in with some drinks and discuss their problems.

Phyllis and Hilary will have fun together, but their evening will be cut short by Billy. He’ll pull Phyllis aside and make another emotional plea. Billy will assure Phyllis that he loves her and wants to make this right. He’ll beg her to come along with him on a wild adventure.

Phyllis will attempt to get rid of Billy, but he can be awfully stubborn. The Young and the Restless spoilers say Billy will mention the idea of going to New Orleans. He’ll note that the Jabot jet is ready and waiting for his queen. Billy will paint the picture as he finishes his pitch. He’ll make a very tempting offer!

Once Phyllis has listened to Billy’s proposal, she’ll have a decision to make. Phyllis will try to fight her desires, but she just won’t be able to. She’ll reluctantly cave in and Billy will whisk her away for a romantic trip. The Young and the Restless spoilers hint that Phyllis and Billy will heat up the town – or at least their hotel room.

By the time Phyllis and Billy return, it looks like they’ll be on solid ground again. Maybe Billy can stay out of trouble for a while! We’ll give you updates as other Y&R news comes in. Stick with the CBS soap and don’t forget to check CDL often for the latest Young and the Restless spoilers, updates and news.