The Young and the Restless Spoilers: Doug Davidson Fights with Fan Over Michael Muhney 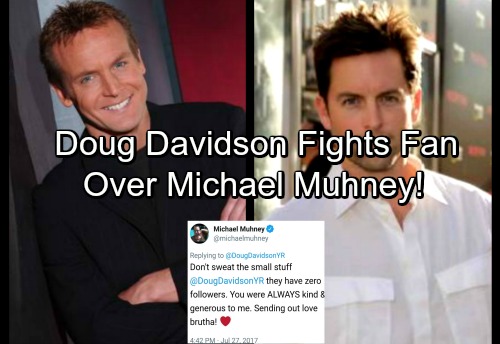 The Young and the Restless (Y&R) spoilers reveal Doug Davidson, who portrays GCPD Police Chief Paul Williams, seemed to be under attack when a Y&R fan posted on his personal Twitter account that she hated him for not allowing Michael Muhney to come back as Adam “Nueman!” Don’t worry, Doug quickly responded asking her if she was out of her mind because he had absolutely nothing to do with him and told her to get a clue. He followed up his response with another comment, informing her that she spelled Newman wrong!

Y&R fans quickly jumped in to defend Doug Davidson saying it was a fake account and to no bother responding, while others went on to say how Davidson is such a nice and sweet guy and don’t understand the hostility towards him. He clearly took things in stride when he he confirmed, again, that he had no control over Adam Newman coming back and if he had power, he would be working! 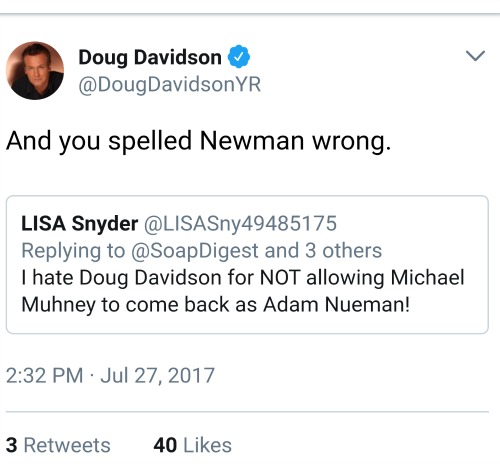 Doug interacts with his fans on a regular basis and has never been one to be rude or ignorant towards anyone, even admitting when asked if he is as level-headed as an actor as he is in real life that he was not; although the emoji with the tongue sticking out implies otherwise; it is clear his fans adore him and feel he is very genuine. 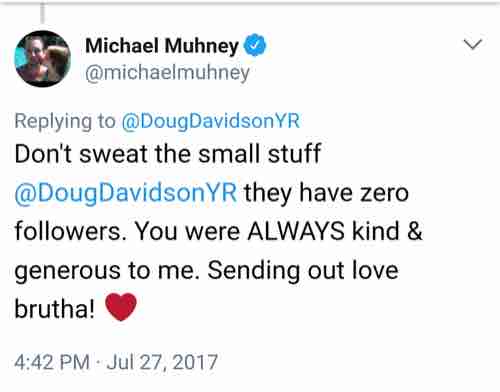 The Young and the Restless spoilers reveal Doug Davidson has portrayed the role of Paul Williams since the character was introduced in 1978. He was a bad boy who was involved with a much younger Nicole “Nikki” Reed (Melody Thomas Scott); both involved in Ian Ward’s (Ray Wise) cult.

Eventually both characters, with sordid pasts come to live in Genoa City, Nikki falls in love with her on-and-off again epic love with the infallible Victor Newman (Eric Braeden) and Paul being involved and marrying strong, powerful women like Lauren Fenmore (Tracey E. Bregman) and the love of his life, Christine “Cricket” Blair (Lauralee Bell). 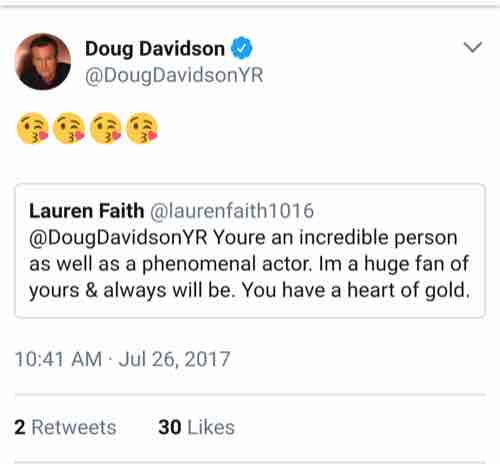 Needless to say Doug Davidson has built quite a fan base through the 39 years he has portrayed the beloved Paul Williams and most fans will step in a defend the actor, especially when the accusations and insults are unfounded. Michael Muhney himself defended Doug on Twitter saying ‘you were always kind and generous to me, sending out love brutha!’ 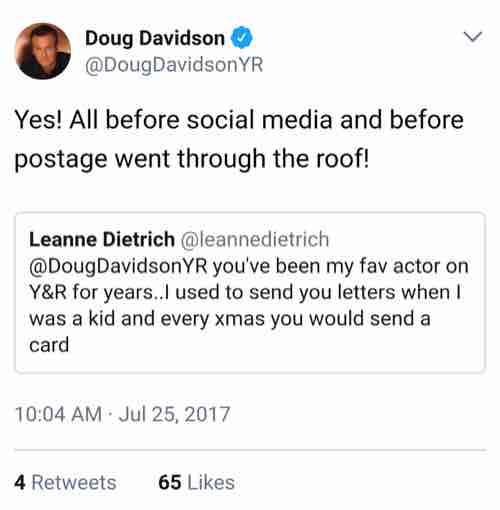