The Young and the Restless Spoilers for Next 2 Weeks: Billy Uncovers Huge Secret – Abby Romance – Victor Gets Nasty – Chelsea’s Past 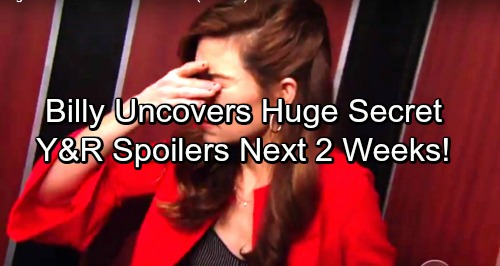 The Young and the Restless (Y&R) spoilers for the next two weeks tease that there’ll be big trouble in Genoa City. The week of July 24-28 will bring a fierce showdown between Nick (Joshua Morrow) and Hilary (Mishael Morgan). He’ll let her have it for airing the footage of his fight with Victor (Eric Braeden), but she’ll insist that she’s innocent. Victor’s approval leaves her in the clear legally.

Meanwhile, Jordan (Darnell Kirkwood) and Hilary (Mishael Morgan) will reevaluate their relationship. They’ll try to figure out if they’re on the same page this week. Elsewhere, Devon (Bryton James) will plan a romantic evening for Mariah (Camryn Grimes). Unfortunately, it could turn into a total disaster by the end of the night.

Other Young and the Restless spoilers say Chelsea (Melissa Ordway) will reflect on her past. Will something trigger a memory of Adam (Justin Hartley) or will this be further back in her history? Across town, Victoria’s (Amelia Heinle) health crisis could leave her life on the line. Her stunning collapse will certainly cause concern.

Billy (Jason Thompson) will uncover a huge secret about Cane (Daniel Goddard) this week. It should lead to a major shocker eventually. Charlie (Noah Alexander Gerry) will also exchange introductions with Juliet (Laur Allen). This meeting should bring some serious tension and awkwardness.

The week of July 31-August 4 will deliver some sneaky moves. Cane will be forced to hide his trail, which sounds like a terrible idea. Is he ever going to learn that honesty is the best policy? Jack (Peter Bergman), on the other hand, won’t have anything to hide – at least not when it comes to his romance. He’ll grow closer to Nikki (Melody Thomas Scott) and that could spark a few problems.

Y&R spoilers reveal that Abby (Melissa Ordway) will focus on her love life for once. She’s usually a bit of a workaholic, but she’ll take some time to let loose. Of course, business will technically be involved. It looks like Abby will hang out with her app partner, Zack (Ryan Ashton), but she may be setting herself up for sorrow.

Other Young and the Restless spoilers say Victor (Eric Braeden) will take action. As threats emerge on every side, Victor will show off his nasty side. There’s no way he’ll let his enemies get away with what they’ve done.

Get ready for the unexpected next week on #YR! pic.twitter.com/zP1QqoxlnH