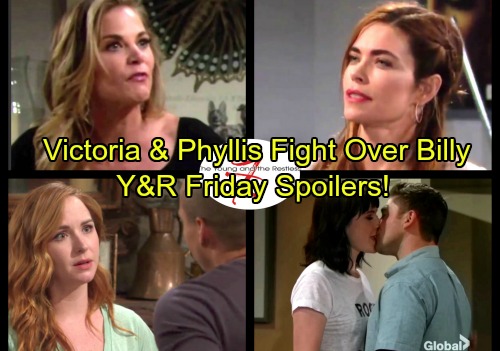 The Young and the Restless (Y&R) spoilers for Friday, October 6, tease that Mariah (Camryn Grimes) will find herself in a tight spot. Devon (Bryton James) will mention the revealing conversation he had with Kevin (Greg Rikaart). Although Kevin didn’t provide details, Devon could sense that he knew more than he was letting on.

Mariah will get nervous when Devon brings up that puzzling chat. He’ll suggest that Kevin made him wonder if he had some competition. Mariah will likely reiterate that there’s no one else, but she obviously wants to be with Tessa (Cait Fairbanks). Since that’s not an option yet, Mariah may choose to stay in this hopeless relationship for now.

Elsewhere, Noah (Robert Adamson) will drop a bomb on Tessa. Y&R fans will recall that Noah arranged for Tessa to stay at Sharon’s (Sharon Case) place. He just didn’t think they were ready to live together. Noah has dealt with plenty of heartbreak, so there’s no need to rush this romance.

However, Noah is falling harder every day. It’s clear that he really cares about Tessa and he’s finally prepared to take a big leap. The Young and the Restless spoilers say Noah will ask Tessa to move in with him. He’ll hope they can take the next step and start working on their future.

Tessa will certainly be thrown for a loop. Will she have reservations about moving this relationship forward? As for Mariah, she may have mixed feelings if Tessa decides to move out. Part of Mariah would miss having Tessa around, but another part of her might think it’s for the best. Keeping Tessa at a distance could help with the pining situation.

When Victoria references the chemistry she has with Billy, Phyllis will argue that it’s hogwash. She’ll contend that anything Victoria’s picking up on is all in her head. Victoria will ask if Phyllis is sure about that. She’ll wonder how Phyllis knows they haven’t kissed.

You can bet that Phyllis will try to get to the bottom of this. She might downplay her concerns around Victoria, but Billy should be on the hot seat before long. We’ll give you updates as other Young and the Restless news comes in. Stay tuned to the CBS soap and don’t forget to check CDL often for the latest Young and the Restless spoilers, updates and news.