BY Heather Hughes on May 19, 2017 | Comments: 10 comments
Related : Soap Opera, Spoiler, Television, The Young and the Restless 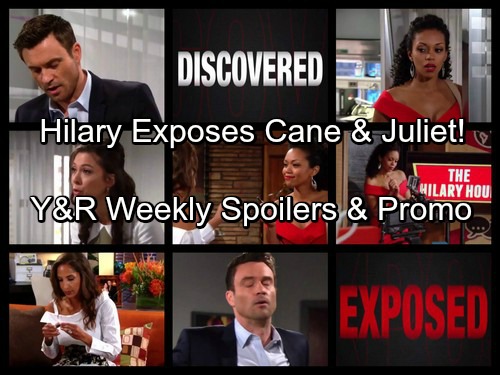 The Young and the Restless (Y&R) spoilers for the week of May 22-26 tease that a juicy secret is about to be exposed. When Cane (Daniel Goddard) and Juliet (Laur Allen) went on a business trip to Tokyo, they had a drunken hookup. Cane has been beating himself up ever since.

Now Cane is facing another crisis thanks to the behind-the-scenes footage. He’s responsible for this mess, but Juliet thinks she made an error with the legal team. She’ll be apologetic during her upcoming chat with Cane. Juliet will recall how she fixed Cane’s blunder with Mr. Sato. She’ll wish she could do the same with this mistake.

Unfortunately, this problem has spiraled out of control and Victoria (Amelia Heinle) will have to handle it. The Young and the Restless spoilers say Cane and Juliet will recall their celebratory night in Tokyo. They’ll agree that it never should’ve happened, but they’ll assure each other that their secret is safe.

Naturally, Hilary (Mishael Morgan) will be eavesdropping nearby. She never misses a hot scoop. Y&R’s weekly promo shows Hilary confronting Juliet. She’ll demand to know how long this affair has been going on. Juliet will fire back that it’s not an affair. She’ll insist that they only had sex once and they’re just trying to put it behind them.

Cane will freak when he realizes his secret is in Hilary’s hands. He’ll gripe that Juliet just dropped it right in Hilary’s lap. Juliet will contend that there’s no need to panic. She’ll suggest that Hilary has no proof of anything. Of course, Juliet doesn’t understand just how crafty Hilary can be. She’s a woman who knows how to get what she wants.

The Young and the Restless spoilers say Hilary will record Juliet’s comments about the one-night stand. She’ll get Juliet’s confession on tape and transfer the info to a flash drive. Later, Hilary will give the flash drive to Lily. She’ll smirk as she prepares to blow up her enemy’s life.

Hilary could still take this scandal public, but it seems Lily will get a sneak peek. Cane and Lily’s world will soon fall apart. The Young and the Restless fans can definitely expect some heated moments this week. We’ll give you updates as other news comes in. Stay tuned to Y&R and don’t forget to check CDL often for the latest Young and the Restless spoilers, updates and news. Please come and join in the LIVE discussion on our Facebook Page!