The Young and the Restless Spoilers: J.T. and Victor Fight To The Finish – Vickie Caught Between Dad, Ex-Husband and Son

BY Sean O'Brien on December 12, 2017 | Comments: one comment
Related : Soap Opera, Spoiler, Television, The Young and the Restless 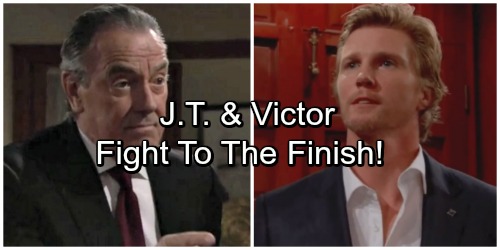 The Young and the Restless spoilers tease that J.T.’s (Thad Luckinbill) return to Genoa City pits him directly against the one and only Victor Newman (Eric Braeden). The investigation into the Moustache’s money matters unexpectedly led to Luckinbill’s character arriving at the Black Knight’s office, where Victoria (Amelia Heinle) also offered a surprised reaction shot.

Savvy Y&R fans, which include all CDL readers, have known for awhile that J.T. was set to return. Yes, deep soap devotees once again benefited from having advanced daytime drama knowledge. Questions leading into this week’s character reprisal wasn’t when J.T. would be back, but what would he do once he arrived?

As hardcore viewers recall, J.T. left GC in 2010. He, his wife (Mackenzie, then played by Clementine Ford) and Reed (as then played by Max Page) moved to Washington, D.C.

Clearly, J.T. and Reed (as now played by Tristan Lake Leabu) will need to reestablish a bond. Victoria’s interaction with Reed’s dad will surely prove key in this coming scenario. 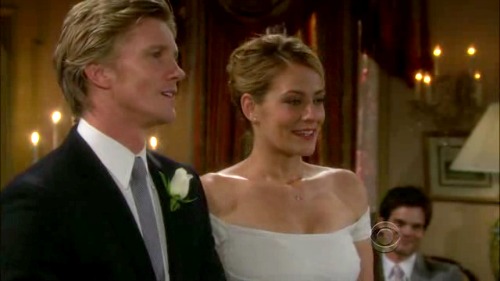 J.T. successfully sued for full custody of his and Victoria’s adolescent son (Reed). Mr. Hellstrom wanted to get his first-born child away from the Newman family’s influence, with Victor being a particular area of concern.

J.T. and Mackenzie were later said to have had a son, Dylan, in 2011. But that development happened when all characters were off-screen.

In late 2017, it appears as though J.T. is looking into Victor’s personal financial dealings. That hook establishes a path back for this character, while also, obviously creating a variety of plots that could be established for the man who lived in GC from 1999-2010.

It’s intriguing that Y&R would opt to bring this particular character back. He has a grudge against the Newman family, but also has a lifetime bond with Victoria. Through the looking glass, Luckinbill and Heinle were married for many years, had children and then stunningly divorced earlier this year.

Heinle tweeted out her support for Luckinbill’s return to the cast when it was announced a few months ago. Might this former on- and off-screen couple be reuniting on one, or both sides of the screen?

Separate from the aforementioned issues is the emergent development of Chancellor Park. Mackenzie is Katherine’s (Jeanne Cooper) granddaughter. So it’s plausible to believe that she, assuming Mackenzie returns, could battle Victor on this issue.

If the character who Ford most recently played isn’t written back, then J.T. might be separated, is, or will be getting a divorce? In that instance and in considering Vickie’s single status, it is reasonable to think that romantic sparks could be reignited. This is a soap opera, so that potential process could take awhile.