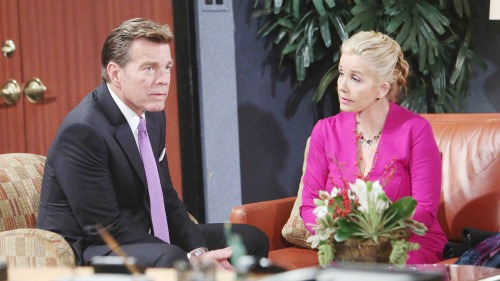 The Young and the Restless (Y&R) spoilers tease that Jack (Peter Bergman) will have a decision to make. He recently threw Nikki (Melody Thomas Scott) out of his home after she insulted Dina (Marla Adams). Jack was willing to put up with Nikki’s badmouthing before, but things are different now. He understands that Dina’s dealing with Alzheimer’s and it’s making her behave in unpredictable ways.

Of course, Nikki isn’t aware of that. We can’t blame her for raging over her stab wound and Dina’s constant meddling. After Jack takes some time to cool off and mull this over, he’ll consider his future. Jack will reexamine his relationship with Nikki and try to figure out if this is really what’s best for them.

Whenever a character reevaluates his or her life, it usually means changes are brewing. It sounds like Jack’s about to dump Nikki. They’re not in too deep, so it shouldn’t be that much of a blow. Y&R fans know Nikki must be pining for Victor (Eric Braeden) anyway!

Still, Nikki will probably want an explanation. She may blame Dina for driving them apart, but Jack will insist that it’s not exactly it. Perhaps Jack will open up about Dina’s diagnosis and the leave of absence he intends to take. Jack might want to put his love life on hold so he can care for his ailing mother.

There won’t be much time for romance. Jack will have to make sure Dina’s not off starting fires or slicing people up at parties. That should be a tough task! Nevertheless, The Young and the Restless spoilers say Jack will be committed to helping Dina. He’ll want to make the most of whatever time his mom has left.

If Jack’s honest with Nikki and explains what they’re dealing with, she’ll certainly understand. Nikki could start drifting back toward Victor. Maybe this is Y&R’s way of eliminating a reunion obstacle. Victor and Nikki will surely get back together sooner or later. They have a lengthy history and they’re pretty much the only characters in town who can put up with each other.

Looks like Nikki won’t be celebrating Thanksgiving with the Abbott family. #YR pic.twitter.com/zssFgUFAy1