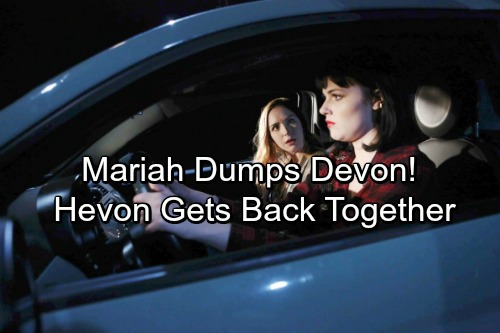 The Young and the Restless spoilers tease that Mariah’s (Camryn Grimes) decision to leave Devon (Bryton James) will result in Hevon potentially reuniting. That news will horrify viewers who detested Hilary’s (Mishael Morgan) assault on Devon’s life in the recent past.

Make no mistake, ever, Hilary was and remains a manipulative year-round Halloween witch. However, she actually does love Devon. Yes, it’s true that she’s caused him discord. But when has the man ever looked happier, except during the time when he was married to Hilary?

Remember Roxanne (Tatyana Ali)? Devon apparently doesn’t, which is why he only makes eyes at Hilary, including when Mariah is around.

Roxanne could have been Devon’s perfect match, but he didn’t realize what a beautiful person Ali’s character was inside and out. She didn’t create trouble, cared about the Winters’ family and loved Devon.

Apparently that purity offered no challenge to Devon, which allowed Hilary to enter the picture. James’ character seemingly made a choice that others have. He convinced himself that Roxie represented a form of settling. Devon could have grown to love that woman, but instead allowed himself to be distracted by Hilary’s gorgeous outward appearance. As her detractors know, her actions spew ugliness with consistency.

As Y&R fans recall, Hilary was married to Neil (Kristoff St. John) when she began fooling around with Devon. That dysfunctional start poisoned Hevon from the jump, as both characters later admitted. However, the genuine chemistry they have with each other allows the still-existing spark to enable the restart of their relationship at any point.

Mariah is being written into interesting territory. Y&R’s writers decided to create a socially relevant story by taking a character who exhibited no traits of being a lesbian, or bisexual. Soaps have long addressed what are seen as topical issues. Savvy viewers know that storyline choices represent the beliefs of those who lead daytime dramas.

It is somewhat reasonable to believe that Mariah’s terrible childhood experience in Ian’s (Ray Wise) cult was confusing. It is possible that Mariah didn’t recognize her apparent feelings all along. Playing off that opening, Y&R has Mariah showing interest in Tessa (Cait Fairbanks). That pushes Devon out, which creates an opening for Hilary.

A quick reunification doesn’t seem likely. The love reconnection would be played out slowly, leading into another marriage. That development would irk a segment of Y&R’s audience, which likely would be the point because Hevon was watchable and would be again. CDL is a leading source for everything linked to The Young and the Restless. Check back regularly for Y&R spoilers and news!