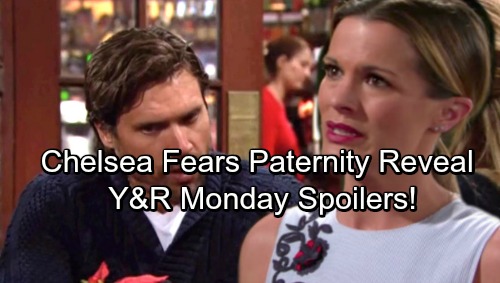 The Young and the Restless (Y&R) spoilers for Monday, December 4, tease that Chelsea (Melissa Claire Egan) will have a change of heart. She’ll tell Nick (Joshua Morrow) that she should probably take the kids to Victor’s (Eric Braeden) Christmas tree lighting. Chelsea will suggest that she doesn’t want to risk angering the great Victor Newman. He could just make things worse for them.

Nick will wonder what Chelsea thinks Victor could possibly to do. He won’t believe there’s anything left for Victor to take. Nick will insist that they should all stay home, enjoy themselves and forget about Victor for the evening. Chelsea will seem nervous and there’s a good reason why. She’ll be rattled over a serious threat.

In Friday’s Y&R episode, Victor implies that he’ll reveal Christian’s paternity if Chelsea doesn’t cooperate. The thought of that will terrify Chelsea, so she’ll try to shift Nick’s opinion on Monday. Chelsea might argue that Nick should just crash the party. She may push him to come along and hope that no red flags are raised. 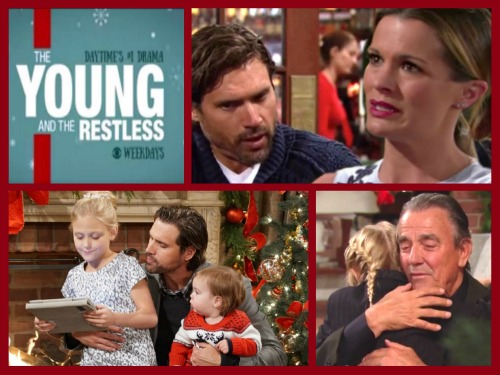 Elsewhere, Nikki (Melody Thomas Scott) will receive some surprising news. She’ll get updates on the recent developments at Newman, so Abby (Melissa Ordway) will be on the hot seat. Victor wants Abby back at the company, but she’ll play hardball. Abby’s furious with Victoria (Amelia Heinle) and has no intention of reporting to her. She plans on getting a raise as well.

Nikki will wonder if Abby is really giving Victor an ultimatum. Abby will counter that it’s simply a request. It sounds like she’s going for an “it’s her or me” option at the company. Will Victor have to choose between his daughters? Stick with The Young and the Restless to see the tense moments ahead.

Meanwhile, Victor will drop a bomb on Noah (Robert Adamson). He’ll note that Tessa (Cait Fairbanks) stole Nikki’s gun and gave it to Crystal (Morgan Obenreder). Noah will become concerned about the secrets Tessa keeps. This isn’t the first time Tessa’s left him out of the loop on something important.

Furthermore, the theft will irritate Noah. He won’t understand why Tessa refuses to trust him or ask for help. The Young and the Restless spoilers hint that a heated confrontation is on the way. We’ll keep you posted as other Y&R details emerge. Stay tuned to the CBS soap and don’t forget to check CDL often for the latest Young and the Restless spoilers, updates and news.