The Young and the Restless Spoilers: Nick’s Plan To Trap Chloe Moves Forward – Sharon Anxious Around Murderer – Cane in Trouble 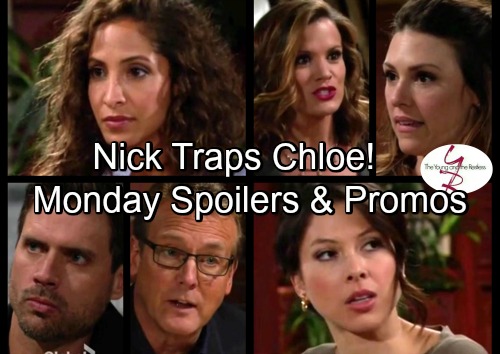 The Young and the Restless (Y&R) spoilers for Monday, April 3, tease that Nick (Joshua Morrow) will make his pitch to Paul (Doug Davidson). He’ll insist that Adam’s (Justin Hartley) case deserves another look. They’ll discuss the possibility that somebody intentionally damaged the propane tank and watched the cabin explode. Paul will want the name of the suspect, but Nick will hold back.

Y&R spoilers say Paul will need a confession or real proof, so Nick will head off to figure something out. Meanwhile, Sharon (Sharon Case) will overhear Michael (Christian LeBlanc) questioning Kevin (Greg Rikaart) about moving up his wedding date. She’ll pass on her best wishes, but she’ll seem highly uncomfortable with the whole idea. 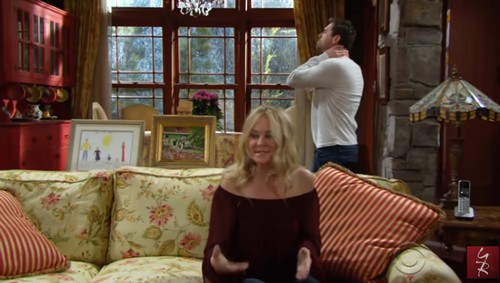 Elsewhere, Chelsea (Melissa Claire Egan) will wonder why Chloe (Elizabeth Hendrickson) is in such a hurry to get marry. The Young and the Restless spoilers say Chloe will contend that she’s just ready to begin her life with Kevin. Chelsea will promise to finish the wedding dress before the ceremony. They’ll both get emotional over the big day and how they’ve made amends.

Later, Chelsea will tell Nick that Chloe and Kevin’s wedding is happening tomorrow. She’ll reiterate that Chloe is innocent. Nick will offer The Underground as a bachelorette party venue. Nick has a secret scheme in mind and it involves getting Chloe drunk. 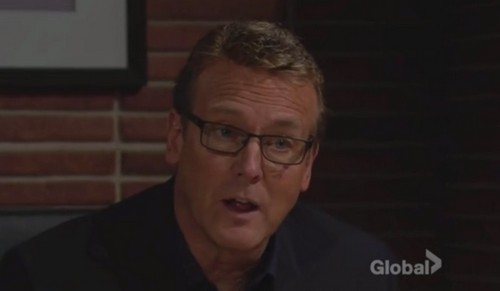 Other Young and the Restless spoilers state that a crisis will be averted, but just barely. Lily (Christel Khalil) will approach Juliet (Laur Allen) at the athletic club to provide a pep talk. She’ll indicate that Cane told her what happened. Juliet will be stunned by the news. She’ll mistakenly assume Lily means the Tokyo sex.

After a moment, Juliet will catch on and cover up her awkward reaction. Lily will assure Juliet that she has a bright future ahead of her. Once Lily leaves, Juliet will get called over to Brash and Sassy. She’ll meet with Victoria (Amelia Heinle) about accepting a new position in Genoa City. 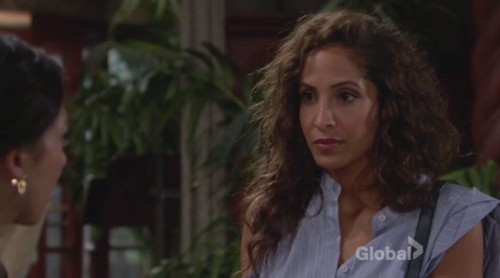 Cane (Daniel Goddard) will urge Juliet to turn down Victoria’s alternate job offer. Juliet will promise that she has no intention of blowing up Cane’s marriage. She’ll suggest that she likes Lily and this won’t be a problem. However, Cane will squirm when he learns Lily and Juliet will be teaming up on an assignment.

At Crimson Lights, Sharon will get a little anxious when Chloe stops by. Nick’s suspicions will definitely be on Sharon’s mind. Back at the police station, Y&R spoilers say Kevin will request two weeks off for his honeymoon in Tahiti. He’ll note that Chloe wants to be unreachable during their romantic getaway.

Of course, The Young and the Restless spoilers reveal that Chloe and Kevin won’t get their happily ever after. Some major drama is headed their way. We’ll give you updates as more details emerge. Stay tuned and don’t forget to check CDL often for the latest Young and the Restless spoilers, updates and news. Please come and join in the LIVE discussion on our Facebook Page!

Wedding bells are ringing and the truth is exploding next week on #YR pic.twitter.com/gKLhG3bMgM