The Young and the Restless Spoilers: These 4 Characters Are At Risk – Who Will Leave Y&R First? 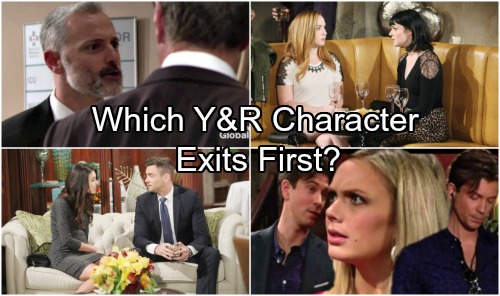 The Young and the Restless spoilers tease that various characters face a realistic chance of being written out of the script. But who among them is most likely to be subtracted?

The question of this feature doesn’t ask readers which character, or actor they want off Y&R. Instead, the specific query is who, among the selected characters, will leave the show first? Let’s review the possibilities.

Juliet (Laur Allen) is having Cane’s (Daniel Goddard) baby. Allen could easily become a long-term player on Y&R. Then again, the placenta issue her character was recently diagnosed with could result in tragic consequences.

If Juliet retains her good health, she’s likely to remain in Cane’s life for awhile. However, the son they’re going to have doesn’t necessarily mean that Juliet will live in Genoa City permanently. Depending upon the direction Y&R takes, Juliet could eventually leave town.

She has enough money to live independently elsewhere. Plus, there’s always the possibility that Cane isn’t her baby’s father. If that paternity point proves true the likelihood of Juliet’s exit would increase.

Graham (Max Shippee) isn’t a main character. He seems to have been invented as a plot vehicle that helped explain Dina’s (Marla Adams) return to GC and afforded her a companion. But what is Graham’s long-term future now that his paternity secret has played out?

He just left Dina for dead at the GC Athletic Club, which is sure to be pieced together by Ashley (Eileen Davidson). That will force him to leave town, or potentially be jailed. He has no incentive to stick around once Dina officially disinherits him. Bye-bye Graham someway, somehow. Furthermore, there is Y&R Buzz that Dina will actually murder Graham!

As the summer unfolded Zack was revealed to be heading a sex ring. Design Date actually was the digital front for his business, meaning that this side character has a short shelf life. Paul (Doug Davidson) is sure to arrest him, or he’ll escape justice.

Tessa (Cait Fairbanks) has been a pleasant addition. She’s likeable, quirky and talented. Her musical ability will soon make her a star, as Devon’s (Bryton James) streaming service and promotion will continue to open doors.

The key to Tessa’s future could lie in Y&R’s choice where Mariah (Camryn Grimes) is concerned. If it opts to pursue that topical angle, then Tessa will remain. If not, Noah’s (Robert Adamson) current girlfriend appears primed to follow her lyrical dreams.