The Young and the Restless Spoilers: Tragedy Strikes The Newman Clan – Faith’s Grave Accident Changes Everything 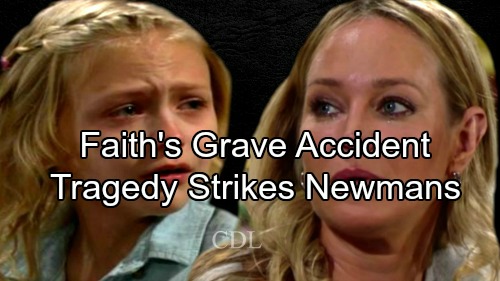 The Young and the Restless (Y&R) spoilers tease that Victor’s (Eric Braeden) ruthlessness will push Nick (Joshua Morrow) to his limit. After Victor pulls off another scheme, Nick will have a real crisis on his hands. It looks like this involves Nick’s business, which means Noah (Robert Adamson) will also be affected.

How’s Faith going to feel once her big brother is mad at Victor, too? It’s certainly not going to improve her view of Grandpa. Naturally, Nikki (Melody Thomas Scott) will be more riled than ever. Victor may even lose the progress he’s made with Victoria (Amelia Heinle). If they finally decide to fill Abby (Melissa Ordway) in on everything, she could easily turn against Victor as well.

In other words, Victor could soon be at his lowest. Once he hits rock bottom, Y&R will inevitably have to repair the damage. Since it appears everyone will be boiling mad, it’s going to take a lot to pull this family back together. An awful tragedy is probably the soap way to go.

The Young and the Restless spoilers hint that Faith will remain stuck in the middle of the drama. She’ll play a key role as this storyline heats up. Y&R recently set up the perfect scenario for a heartbreaking accident. Faith talked to Nick and Sharon (Sharon Case) about competing in some equestrian events. She was quite excited about the idea of showing her stuff.

This seemed like more than just filler dialogue. It may have been a crucial clue about what’s ahead on the CBS soap. Faith’s instructor claims she’s ready for a competition, but is she really? If Faith finds herself feeling upset again, she might even head out for a practice session alone. Obviously, that could have disastrous consequences.

The Young and the Restless has been revving up Faith’s interest in riding lately. Perhaps the Newman war is the reason why. Will Faith be critically injured after being thrown from a horse? If so, the poor girl could easily find herself comatose in the hospital.

Maybe this would be the wakeup call that the whole family needs. If Faith’s spine is damaged, Victor might even have a shot at being the hero. He could call in special surgeons to fix Faith up and prevent paralysis. Nick and the rest of the gang might be grateful enough to forgive Victor’s transgressions.

As a bonus, this could reunite Sharon and Nick. Their relationship crumbled after losing Cassie (Camryn Grimes), but Faith’s ordeal could actually help them patch things up. They would undoubtedly bond as they prayed for a miracle.