BY Marcy Cohen on November 21, 2017 | Comments: one comment
Related : Soap Opera, Spoiler, Television, The Young and the Restless 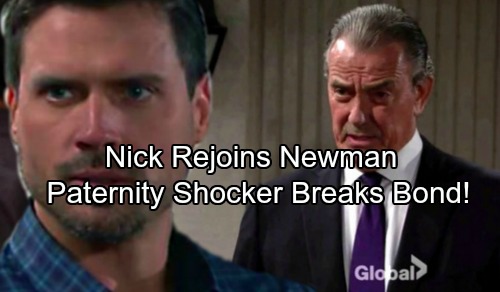 The Young and the Restless (Y&R) spoilers tease that Victor’s (Eric Braeden) plans are falling into place. Although Abby (Melissa Ordway) helped create a Newman disaster, Victor intends on keeping her around. She wasn’t disloyal to him and that’s the important thing. Victor’s also thrilled to have Victoria (Amelia Heinle) back at the family company. He loves when his children become faithful servants.

Nick (Joshua Morrow) gave away his fortune, but his business burned down a short time later. That’s undoubtedly left him wondering what to do next. What happens now that The Underground is kaput? Nick might try a few options, but there’s a good chance he’ll end up back at Newman down the road.

Victor warned Nick that he wouldn’t be getting any help, but that’s probably just because he likes to feel in control. If Nick groveled before the Newman throne, Victor would likely forgive and forget. It’d be kind of fun to watch Nick kiss the ring. He was right to push back after everything Victor did, but he’s been a bit sanctimonious lately. Many Y&R fans wouldn’t mind seeing Nick taken down a notch.

The Young and the Restless spoilers say Chelsea (Melissa Claire Egan) will reach an agreement with Victor on next week’s new Y&R episodes, November 27-December 1. What deal will Chelsea make? Will she agree to help Nick and Victor patch things up? Chelsea might be willing to do that if Victor provides some serious motivation.

Regardless, Nick could get desperate enough to apologize and pledge his loyalty. If so, Victor would feel great about all his loyal soldiers getting in line. Victoria and Abby are gearing up for a war, but Victor could shut that down eventually. He might even promote Nick if they truly make amends and the sister battle gets out of hand.

Everything might finally be right in Victor’s world, but that’s exactly when another round of trouble would hit. The Young and the Restless fans are still waiting for Nick to learn the truth about Christian’s (Jude and Ozzy McGuigen) paternity. We can’t forget that Adam (Justin Hartley) is Christian’s father. If Nick realizes Victor has known all along, it could throw their relationship into turmoil once again.

In fact, this could cause major upheaval for the whole Newman clan. That sounds like an exciting way to bring an Adam Newman recast into the mix. Would you be interested in Adam’s return to Genoa City? We’ll give you updates as other Y&R news comes in. Stick with the CBS soap and be sure to check CDL often for the latest Young and the Restless spoilers, updates and news.