The Young and the Restless Spoilers: Week of November 27 – Hospital Heartbreak, Cane Fears the Worst as Baby Sam Fades Fast 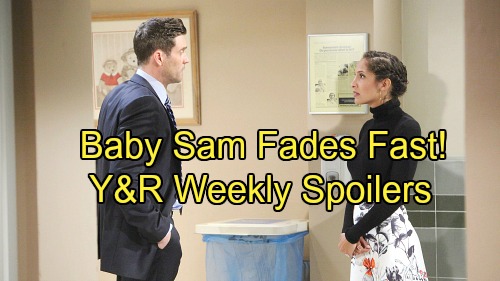 The Young and the Restless (Y&R) spoilers tease that Cane (Daniel Goddard) will face some tough moments. On next week’s new Y&R episodes, November 27 – December 1, he’ll receive some terrible news that turns his world upside down. Cane won’t be sure what to do, but Lily (Christel Khalil) will offer some support. He’ll certainly need all the help he can get during this crisis.

Y&R fans can expect anxiety to hit at the hospital. It looks like Cane’s son will face a shocking setback. Little Sam is fighting for his life, but there are no guarantees that he’ll make it. Coping with the loss of this baby could make a great story for Cane. It would undoubtedly pull Lily into his orbit even more. They’re already inching toward a reunion, but a tragedy could speed the process along.

However, it’d be a shame for The Young and the Restless to kill off a kid and all the drama that comes with him. Many viewers would love to watch Cane and Lily raise this child together. Just think about when Cane’s son is older! Sam could battle all kinds of issues thanks to how he was conceived. Juliet’s (Laur Allen) death would be difficult for Sam to handle as well.

Plus, Y&R has to think about the future. Sam might make a good love interest for Katie when they’re teenagers. The show should always try to balance things out in preparation for the teen group. It’s best to keep a few kids in the same age range so they can eventually SORAS them together.

In other words, keeping Sam around would have a lengthy, satisfying payoff. If Sam survives his ordeal, his health could continue to be a concern for Cane. It’s possible that Sam will be diagnosed with something serious. It could be a condition that will affect Sam throughout his entire life. The Young and the Restless spoilers reveal that the situation is quite dire.

Whatever the case, Cane will definitely be a mess in the waiting area. Will seeing this caring, vulnerable side of Cane help Lily forgive him? Will she ultimately call off the divorce and vow to be Sam’s new mom? We’ll give you updates as other Y&R details emerge. Stick with the CBS soap and don’t forget to check CDL often for the latest Young and the Restless spoilers, updates and news.