The Young and the Restless Spoilers: Week of September 18 Preview Update – Lily Explodes – Juliet Leans in for a Kiss 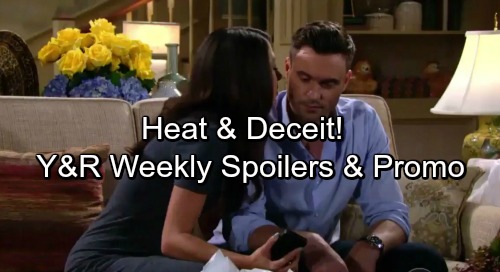 The Young and the Restless (Y&R) spoilers update for the week of September 18 tease that we’ll see some hot moments on the CBS soap. For starters, Chelsea (Melissa Claire Egan) and Nick (Joshua Morrow) will heat things up. That’s good since Nick could use a fun distraction. His feud with Victor (Eric Braeden) will continue, but at least he’ll make time for some romance.

Hilary (Mishael Morgan) will also experience a steamy connection. It’s obvious that Hilary still loves Devon (Bryton James), but she can’t deny her attraction to Jordan (Darnell Kirkwood). As Jordan helps her with her workout routine, Hilary will feel the burn in more ways than one.

Meanwhile, Cane (Daniel Goddard) and Lily’s (Christel Khalil) therapy session will turn into a total disaster. It looks like Lily will finally release some of the anger that’s been building. Cane will want to fight for their marriage, but Lily won’t see the point. She’ll note that Cane is having another woman’s child. Lily just won’t know how they’re supposed to get past that.

Later, Cane will be sulking at the Chancellor mansion when Juliet (Laur Allen) arrives with takeout. Perhaps she’ll bring her “baby daddy” some comfort food. Since Juliet won’t have plans for the evening, Cane will invite her to stay. They’ll unpack the takeout and bond over a meal together.

The Young and the Restless spoilers say Cane will open up about his difficulties with Lily. He’ll confess that there may not be any hope for them. Juliet will suggest that she’s sorry, but she’ll be doing a happy dance on the inside. Her desires for Cane are getting stronger and she’s about to act on them.

Y&R’s weekly preview promo shows Juliet leaning in for a kiss on the sofa. How will Cane respond to Juliet’s latest move? He may resist getting involved romantically, but Juliet will keep working on it. They’ll grow closer as the pregnancy progresses, so Juliet just might have a shot at being with Cane.

It sounds like some great episodes are coming up. We’ll give you updates as other news emerges. Stay tuned to Y&R and don’t forget to check CDL often for the latest Young and the Restless spoilers, updates and news.