The Young and the Restless Spoilers: Who Will Hilary Marry Next? – Genoa City Surprise Couple 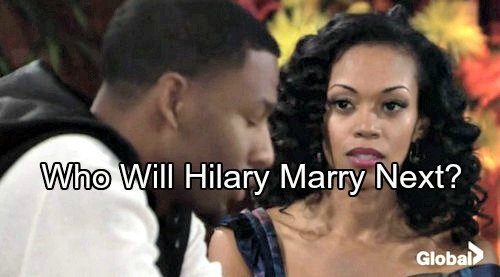 The Young and the Restless spoilers tease that Hilary (Mishael Morgan) won’t be without a man for long. So let’s review which Genoa City men are her likely targets. This feature will be written in a deferential style that portrays Hilary as quite the catch.

Devon (Bryton James) is, of course, at the top of this list. The former Mr. Hilary Curtis was allowed to move on with his life earlier this year after Hilary agreed to let him go.

Like his adoptive father Neil (Kristoff St. John), Devon’s life was surely changed after he fell in love with this unique woman. If Mr. Hamilton is smart, he’ll turn away from Mariah (Camryn Grimes), as the audience knows there’s no future with her anyway.

Jack (Peter Bergman) has been kissed on two different occasions by the now-owner of GC Buzz. There are many personal and professional benefits that would result from Mr. Abbott offering Hilary a ring.

Bergman’s character has been dating within his age range recently, as Jordan’s (Darnell Kirkwood) camera captured. Nikki (Melody Thomas Scott) will eventually go back to Victor. So Jack would gain the type of younger woman that he’s generally drawn to and receive indefinitely positive press on the Hilary Hour by synching his life to Hilary’s via matrimony.

Cane (Daniel Goddard) has transformed into a drama king this year. That makes him a suitable companion for Hilary. Cane’s new persona matches the type of arm candy Hilary needs in her life.

Hilary was the closest thing to a friend Juliet (Laur Allen) had. So it makes sense that she would help Cane raise Juliet’s son Sam. Yes, there is the Lily (Christel Khalil) factor. But being with Hilary would likely allow Cane to quickly flush his former wife out of his system.

Hilbilly (Hilary plus Billy) has a nice ring to it. Billy has money and loves a chaotic lifestyle. Yes, he is husband material.

Nick (Joshua Morrow) seems certain to kick Chick in the near future. So he’ll be available. He’s no longer wealthy, but could prove useful for Hilary in various ways as he’s still linked to Genoa City’s power players.

And then there’s Jordan, who was referenced earlier. He foolishly looked in Lily’s direction during the period of time when Hilary was interested in him. Hilary might be generous and forgive Jordan, after which they could get hitched.

Savvy readers can surely weigh in on the above options, or suggest one that wasn’t mentioned like Victor (Eric Braeden), or others. Wink.