BY Joanna Mazewski on October 18, 2017 | Comments: Leave Comments
Related : Soap Opera, Spoiler, Television, The Young and the Restless, This Is Us 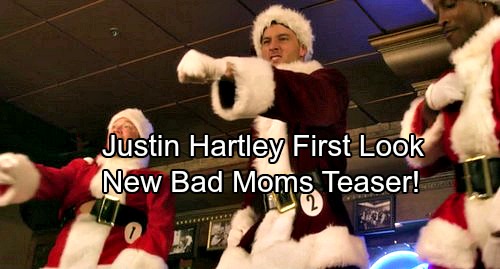 It’s without a doubt that this holiday season is going to be very merry for a lot of Justin Hartley’s fans! In a new teaser trailer, Justin’s character Ty gets very up close and personal with Carla (played by actress Kathryn Hahn).

Carla and Ty strike up a romance and before you know it, Carla is telling her friends all about her new, sexy boyfriend. As a matter of fact, Ty even treats Carla to a sexy Santa dance-off in front of her friends, which is bound to make Justin Hartley’s fans begging for more.

“You learn a lot about a man when you wax his sack,” Karla tells her friends Amy (Mila Kunis) and Kiki (Kristen Bell) when they ask her how they met. “Some guys cry. Some guys act real tough. But Ty was so calm. It was almost like waxing the balls of the Dalai Lama.”

In a previous teaser clip, Justin bares it all for the cameras while Karla waxes his body. This is the first time that fans have seen so much of Justin, both on the small and big screens. But it’s not like anyone is complaining!

The actor is best known to soap fans for his role as Adam Newman on The Young and the Restless. Justin left the series to join NBC’s hit dramedy, This is Us. He plays Kevin Pearson, a young man who is pursuing his Hollywood career while trying to balance his professional life with his love life. The show has helped make Justin Hartley the household name that he is today.

It’s without a doubt that fans can’t wait to see more of Justin Hartley (quite literally) when Bad Moms Christmas hits theaters on November 1. Drop us a line with your thoughts in our comments section below. Also, don’t forget to check back with CDL often for the latest Young and the Restless spoilers, updates and news.