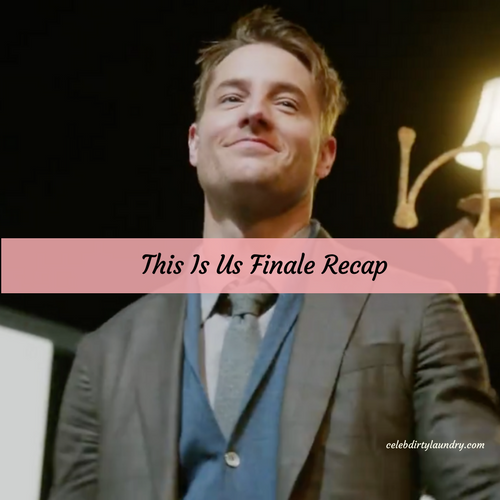 Tonight on NBC their new honest & provocative dramedy series This Is Us airs with an all-new Tuesday, March 14, 2017, finale episode and we have your This Is Us Recap below.  On tonight’s This Is Us season 1 episode 18 finale, as per the NBC synopsis, “In the first-season finale, Jack heads to Cleveland to make things right with Rebecca on the night of her first big gig with the band. Then, Randall, (Sterling K. Brown) Kate and Kevin make big decisions about their futures.”

So make sure to bookmark this spot and come back between 9 PM – 10 PM ET! for our This Is Us recap.  While you wait for the recap make sure to check out all our This is Us recaps, spoilers, news & more, right here!

This Is Us begins tonight with Jack (Milo Ventimiglia) drives the 2 hours to see his wife, Rebecca (Mandy Moore) and her band perform. He flashes back to a memory of fixing a car for Mrs. Peabody. She sets him up on a blind date with her best friend’s granddaughter; while Rebecca’s friends also push to set her up with someone.

She says there is nothing wrong with focusing on her singing career, they tell her its only 1 in a million becoming a singer and she needs to diversify in case the music doesn’t work out.

Jack arrives at the bar listening to the band, while Rebecca is busy getting ready to perform; Ben (Sam Trammell) comes into her dressing room, as she babbles saying she has 3 kids and shouldn’t be on stage. He leans into to kiss her and she backs off, asking him what the hell he was thinking. She says Jack was right, and leaves the room; Jack continues to drink at the bar.

A younger Jack arrives home to his parents eating TV dinners. His dad hassles him about getting a job with a real salary; he pours a drink to raise a glass to his 28-yr-old son who will probably live in his attic until the end of time. Jack retreats to the attic to hear the game on the radio and hides his money in a case in his military chest. Rebecca tries to call Jack at home, leaving a message, missing him and loving him.

Jack and his friend Daryl look at an old warehouse, visioning their own bodyshop one day. Jack says they will make it, and he is going to get himself and his mom out of that house where his father lives. Jack wants in on a poker game, D warns him that these guys are bad guys, but Jack says bad guys never see the good guys coming.

After a few beers, jack goes in search of his wife, he goes down the stairs to the band’s room, where he runs into Ben. He calls out for Rebecca when Ben tells him not to punish his wife because he crossed the line; Jack had no idea but begins to punch Ben over and over again. Rebecca comes in and calls Jack, who stops, but she looks shocked.

Ben refuses to call the police on Jack, but Rebecca attends to Ben over being with Jack. She says she needs to drive a drunk Jack home informing Ben it is over for them and the band.

A younger Rebecca calls her friend after reading a lot of rejection letters, saying maybe its time she diversifies and agrees to a date. Mrs. Peabody calls Jack and gives him the information to his blinddate on Friday night; just as he is on his way to the illegal poker game. D tries to convince him to not join the game, but he does anyways.

The poker game is filled with some bad guys, but Jack is determined to win some money; believing its his time to win something, betting everything he’s got. Jack wins the entire first pot and wants to leave but the man he won all the money from insists he finishes his drink.

Daryl is excited until the men come out and beat Jack up stealing all the money again, saying if he sees either of them again, he will kill them. Rebecca drives a drunk Jack home, who wants to talk but she says not while he is drunk.

Time bounces back and Daryl tells Jack they will make the money another way; Jack is broken over how his father is the same way, over and over. He wants to know when will he get his break? Jack promises he is coming back next week to win back what is his.

Rebecca and Jack return home, where she deletes the message she left him. He doesn’t know what to say but she gives him frozen bag of veggies for his hand and glass of water to help sober him up.

He promises to fix this, but she wants to know how long the drinking has been going on; he admits it has been weeks, but she hasn’t been around to notice. She finds it convenient that hs alcoholism returns after 7 years when something good is finally happening for her.

He demands to know what happened with Ben. She says he tried to kiss her, Jack wants to know what else; she is furious he would even ask that. She finally snaps saying him and the kids don’t fulfill her. She has no life, she is a housewife to 3 teens who don’t need her any more and a husband who waltzes into the kitchen for a beer and passed out by 10 pm. She yells that she is a fricken ghost!

She pushes him, saying he hated that she had something going for her; he admits he hated the lie that she was working with her ex-boyfriend. He shouts that she is a 40-year-old woman singing covers at a pub, that is not a career and it is ridiculous.

He continues to say he is the only one working and supporting this family but she feels he isn’t supportive makes him want to ram his head through a damn wall. She says it must feel good for him to let out his father. He says he has always given her what she’s wanted, sacrificed for the family, she has no ideas what he had to do. She says he is ridiculous.

He says this is insane and she demands to know what she loves about her right at that moment. She tells him to make sure the next time he says “I love you” to make sure he isn’t saying it just out of habit. She goes upstairs to bed.

Jack is back in his parents’ attic, while Rebecca is getting ready to go out. Jack turns off the music as his dad is passed out in his chair and leaves the house.

In the morning, Rebecca wakes up to find that Jack slept on the couch. Rebecca tells Jack not to apologize as they both feel terrible, but they both meant what they said. She says they can’t pull it all back suggesting he goes to stay with Miguel (Jon Huertas) to give them some air; he agrees.

Rebecca arrives at the restaurant for her blind date, she agrees to sit at the table waiting for him, complaining that she could be at a mic night. Jack tells his cousin Daryl how to keep the bartender busy while he robs a bar for his money.

As Jack orders a drink, he remembers he was supposed to have a blind date. Rebecca meets a young man named Ethan, who apologizes for being late.

Jack comes down the stairs with a bag packed informing Rebecca that Miguel is fine with him staying with him for a while. Rebecca wants to know what they say to the kids; he says tell them the truth, they had a fight and need a minute to regroup. Rebecca worries about the kids, and screwing them up. He says they have shown them a healthy marriage.

Kate (Chrissy Metz) finds a young picture of her mom with a microphone and tells Toby (Chris Sullivan) that when they get back she wants to sing. Kevin (Justin Hrtley) says goodbye again to Sophie as he pursues his dream in Hollywood after the call from Ron Howard; she encourages him to chase it.

Randall (Sterling k. Brown) remembers words his father William (Ron Cephas Jones) said to him. Every once in a while, we’re going to do something that will knock us off our feet; he smiles as he looks through a photo album full of memories. William’s words continue: something that will exceed out wildest dreams. Randall tells his wife, Beth (Susan Kelechi Watson) that he wants to adopt a baby.

Jack continues to say the kids will be fine, but he cannot go to who he was before he met her. A younger Rebecca tells Ethan that he seems like a lovely guy but she needs to be signing tonight and leaves the restaurant. Daryl calls the bar the sign for Jack to steal all the money, just when he turns and sees Rebecca singing on stage and is mesmerized. They see each other and smile.

Jack reveals the night they met, he was supposed to have a blind date, but then he saw her and stood the other girl up. Rebecca wonders who she was and Jack admits he never has. Jack says he is going to tell her what he loves about her now.

Rebecca smiles as Jack says she isn’t just his great love story, she is his big break. He agrees that their love story may not be that great right now, but he promises her is is just getting started. He winks, picks up his bag and walks out the door as Rebecca cries.