BY Sarah Luoma on September 26, 2017 | Comments: Leave Comments
Related : Recap, Television, This Is Us, TV 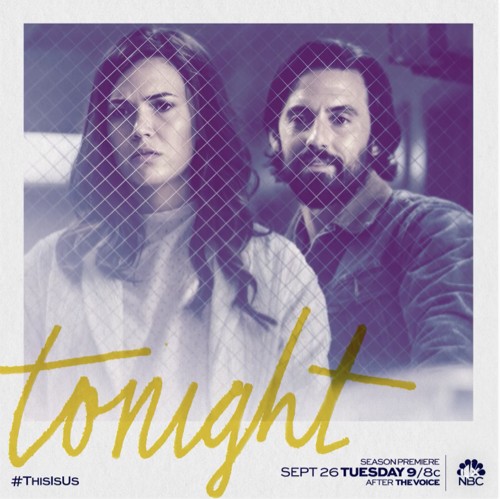 Tonight on NBC their new honest & provocative dramedy series This Is Us airs with an all-new Tuesday, September 26, 2017, premiere episode and we have your This Is Us Recap below.  On tonight’s This Is Us season 2 episode 1 premiere, as per the NBC synopsis, “The Season 2 premiere picks up during the Big 3’s birthdays as Randall (Sterling K. Brown) and Beth debate on a life change, Kate pursues a new passion and Kevin balances his career and relationship. Meanwhile, Jack and Rebecca deal with the fallout of their fight.”

So make sure to bookmark this spot and come back between 9 PM – 10 PM ET! for our This Is Us recap.  While you wait for the recap make sure to check out all our This is Us recaps, spoilers, news & more, right here!

A young William is typing on his type writer about life, advice and regrets. Rebecca picks the kids up for school. In present day, Randall is dancing on the sidewalk with the neighbor’s baby. He tells them he has baby fever now that he and Beth have been discussing adoption. Toby tells Kate she is going to crush her audition before wishing her a happy 37th birthday. Kevin is filming on set with Ron Howard shooting a proposal scene. He finishes and is serenaded by the crew with happy birthday.

A young Rebecca walks the kids into a diner to meet Jack. They want to know what is going on. They all sit. He tells them that he and Rebecca want to talk to them. Rebecca tells them about Ben and the band, and Jack’s difficult night. She has left the band and now they just need a moment. Jack will stay at Miguel’s house. Kate gets upset and leaves the table. Kevin follows her. Randall gets angry too. He gets up and leaves. Jack assures Rebecca that they will all be fine.

At home, the kids wish Randall a happy birthday. The girls ask him why he stays home and mommy goes to work. Kevin gets a call from Sophie. She can’t leave her mom. She had a bad morning. She can’t leave her to come to LA. She is sorry she can’t be there. She hopes she didn’t ruin his birthday.

Toby has his eyes closed. Kate comes out in her wardrobe for her audition. Toby loves it. Kevin shows up. He wishes Kate a happy birthday. He questions Kate’s outfit – is she trying too hard? Toby reminds Kev that he has a key to the apartment for emergencies.

Jack tells Miguel about his meeting with Rebecca at the diner. Jack is trying to stay positive. Miguel reassures him. Back at home, Rebecca and the kids eat lunch. She asks them about the party. None of them want to talk. That’s it, they are all going to the movies, Rebecca tells them.

Randall and Beth meet with a social worker about adoption. Randall wants a little boy. Beth gets sarcastic about Randall wanting to replicate his own situation. She asks the social worker if she has a little kids lying around that have been left at a fire station. She gets up and leaves. Randall meets her outside. He tells her she needs to wrap her head around this because this is what he wants. Instead of getting in the car she walks.

Kate is at the auditions, looking at everyone coming in. She feels insecure. She gets up and leaves.

Jack waits by the phone while reading the paper. Rebecca and the kids are at the movies. Randall recalls the night he went home without his partners knowing. He witnessed some of their fight over Rebecca working.

Rebecca shows up to see Randall at home. She is there to wish him a happy birthday. He tells her how he and Beth are struggling with adoption. He wants to know how she and Jack decided.

Rebecca tells Randall about how she was scared to adopt him. Jack pushed it on her and she is happy because he became her life.

Beth talks to William as the two sit at a picnic table at the park. She tells him how bullheaded Randall is. How he does whatever he wants without asking her first.

Toby and Kate meet Kevin for dinner. They sit down to eat. She confesses she bailed on her audition. Toby discovers Kevin already knew. He is hurt. He gets up and leaves.

Randall comes home. He sits at the dining table with Beth. He tells her that he went to see his mom and how she admitted to not wanting to adopt him at first. He tells Beth that they are perfectly imperfect together.

Jack walks into a local bar. He tries to get book Rebecca a solo gig but the owner doesn’t want to talk to him. Jack presses. The manager tells him that they don’t book solos. Jack takes the hint, thanks him and leaves.

Toby tells Kevin outside the restaurant that he is going to marry Kate. Therefore he should be the one to cheer her up and buy her birthday dinner. Kate comes out and tells them she has had it. She leaves to the audition.

Beth and Randall sit down at the picnic table. She gives him a collection of poems William wrote for him. She had it made into a book.  She tells him she wants to adopt an older child.

Kate shows up for the audition. They tell her it’s too late. She pleads. They tell her she can sing one song. She takes the stage. She sings for 30 seconds. They cut her off. She gets mad and gives them a speech about her dress size. The man reassures her it is her lack of ability. She needs to rehearse more, much more.

Kevin explains to Toby that he and Kate are more than sister and brother. She was the one who told him that their father died.

Rebecca shows up to see Jack. She tells him that they both gave up on their dreams and she is upset, but she shouldn’t have let him leave. Jack admits that he is drunk right, he has been drunk for weeks and he needs to get a handle on it before he can come home. He shuts the door. A knock comes again. It is Rebecca. She tells him to get in the car. They take off. She looks over at him in the driver seat. Flash forward, Rebecca is sitting in the car alone. She is driving. She looks over at the empty seat next to her. Jack’s things are on the front seat. She is sad. She pulls up in front of their house. There was a fire. She begins to sob.