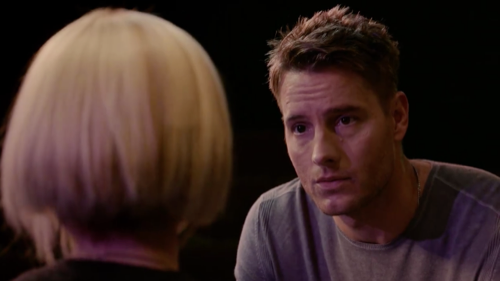 Tonight on NBC their new honest & provocative dramedy series This Is Us airs with an all-new Tuesday, January 17, 2017, episode and we have your This Is Us Recap below.  On tonight’s This Is Us season 1 episode 12, as per the NBC synopsis, “An exhausted Rebecca (Mandy Moore) forgets Jack’s (Milo Ventimiglia) birthday, as their triplets’ due date quickly approaches; Dr. K struggles to cope with the loss of his wife; and the firefighter who brought Randall (Sterling K. Brown) to the hospital fights to save his marriage.”

So make sure to bookmark this spot and come back between 9PM – 10PM ET! for our This Is Us recap.  While you wait for the recap make sure to check out all our This is Us recaps, spoilers, news & more, right here!

Tonight’s episode of This Is Us kicks off with a flashback to Jack and a very pregnant Rebecca. The novelty of pregnancy has worn off and she is uncomfortable and miserable. While she is ranting to Jack about the house being a mess and none of her shoes fitting, Miguel calls and saves him. Jack whispers in to the phone that he thinks that Rebecca forgot his birthday.

Meanwhile, Dr. Nathan Katowsky is home alone and having a bowl of cereal by himself. He has a lonely breakfast and chats with his late wife’s empty seat at the table. It’s his day off, and his grand kids are coming over later.

The firefighter that discovered Randall at the fire station when he was born heads to confession at church. He confesses that his marriage is in shambles, and he has started smoking cigarettes again. Joe asks the pastor to pray for his and his wife Samantha’s marriage.

Rebecca has officially snapped. While leaning in the freezer and trying to cool down she shouts at Jack to get out of the house. She wants to be alone in their disaster of a house. After Jack leaves, Rebecca looks at the calendar and realizes that it is his birthday – she feels like the worst wife ever.

Miguel plans a birthday surprise for Jack and takes him golfing. He’s not too impressed, golf isn’t really his thing, he would rather be home with Rebecca. Miguel explains that he will be a father soon, and he needs to learn to take a little time for himself and do things like play golf.

Dr. Nathan heads to the grocery store to pick up cereal for his grandchildren before they arrive. He bumps in to a woman named Anne who awkwardly flirts with him, she’s a widow and understands how hard it can be. She offers to make him dinner, but Nathan turns her down.

Rebecca is frantically trying to make Jack a birthday cake, she calls Shelly and cries on her answering machine that Jack is going to leave her because she forgot his birthday. She needs a ride to the grocery store. Jack took the car and Shelly isn’t home, so Rebecca has no choice but to walk there. She makes some flip-flops out of duct tape and starts heading down the sidewalk in the sweltering heat to get the stuff she needs to make Jack a cake.

Nathan’s son and daughter-in-law come over with the kids – they sit at the table and chat awkwardly. Nathan’s son wants him to “get out there” and start making some friends. He’s not too impressed that everyone is trying to get him to move on from his late wife so fast.

Miguel takes Jack to the club house to buy his first set of golf clubs. The guys there tell him how much he is going to love golf after the triplets arrive. Jack gives a moving speech about Rebecca and his future babies – unlike them, he doesn’t want to escape from them, he wants to be with them every second, no matter how crazy Rebecca is being.

Rebecca walks to the only store in walking distance, which is a liquor store with a few snacks. She cries to the cashier that she has to make Jack a cake – but the store doesn’t carry flour or sugar. Rebecca settles on a banana nut muffin and buys some twinkies so that she can scrape the icing off from them and make it in to frosting.

After Rebecca is done with making Jack’s cupcake, she heads to the baby’s not finished nursery and sits down and talks to the triplets in her belly. She confesses that she is terrified about being a mom, she doesn’t want to ruin the triplets’ lives. Rebecca vows to always protect them, sing to them, and enjoy their laughs.

At the fire station, Joe steps outside and finds Randall lying in a box. Randall’s birth father is hiding around the corner and leaves once he sees that the fireman has found the baby.

Jack walks in and overhears Rebecca talking to her baby bump, he surprises her with a video camera that he bought. Rebecca cries and apologizes for forgetting his birthday. She surprises him with a towel that she got him at the liquor store and his cupcake. Jack reminds her that she forgot one of their birthday traditions – he wants his sexy dance.

At Nathan’s house, he has a huge blow-up with his son Peter. Peter rants that his mom passed away 14 months ago and it’s time for him to move on. Nathan snarks that if he tries to get him to “move on” one more time, he won’t be welcome at the house any more.

Rather than following protocol and taking the baby to the hospital, Joe takes Randall home to his wife Samantha. Joe thinks that Randal is the miracle he has been praying for and he was sent by God to fix their marriage since Samantha can’t have kids of her own. Joe’s wife isn’t moved by the gesture, she snaps at Joe that someone else’s baby won’t save their marriage, she orders him to take the baby to the hospital.

After his talk with his son, Dr. Katowsky heads to the cemetery to visit his wife’s grave – he breaks down in tears and says that he doesn’t know if he can keep on living without her. It sounds as if Dr. Katowsky is giving up, then his pager goes off and he rushes to the hospital – it’s time to deliver Jack and Rebecca’s triplets.

After the delivery, Rebecca wakes up, Jack breaks the news to her that they lost one of the babies. Rebecca is devastated. Jack heads to the nursery and meets Joe, he just dropped off Randall.
Joe heads back home and Samantha is up waiting for him. She admits that she wishes they could start over fresh and reintroduces herself to him.

The next morning Nathan has his bowl of cereal and tells his late wife about meeting Jack, and he and Rebecca adopting Randall. Nathan was inspired by Jack pushing on after losing his baby, and he has decided that it is time for him to finally move on too.

Tonight’s episode ends with Jack, Rebecca and the triplets a few years later – watching the fil from the day that Rebecca went in to labor.