BY Cristie Geroux on February 21, 2017 | Comments: Leave Comments
Related : Recap, Television, This Is Us, TV 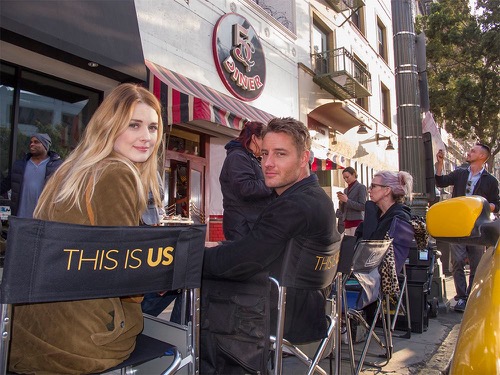 Tonight on NBC their new honest & provocative dramedy series This Is Us airs with an all-new Tuesday, February 21, 2017, episode and we have your This Is Us Recap below.  On tonight’s This Is Us season 1 episode 16, as per the NBC synopsis, “Randall (Sterling K. Brown) and William (Ron Cephas Jones) take a road trip to Memphis, where Randall learns about his biological father’s past.”

So make sure to bookmark this spot and come back between 9PM – 10PM ET! for our This Is Us recap.  While you wait for the recap make sure to check out all our This is Us recaps, spoilers, news & more, right here!

This Is Us starts tonight with William’s (Ron Cephas Jones) celebrating their pregnancy with him. His father dies while on a military mission, but his mother promises they will be okay.

Randall (Sterling K. Brown) and Beth (Susan Kelechi Watson) meet with Dr. Lee about Randall leaving the hospital 5 days after his hospitalization for his break down; she objects to him taking his father, who is at the end of stage 4 cancer on a road trip to Memphis. Randall says William wants to take him to where he was born, and possibly meet some extended family. Dr. Lee feels Randall can do it, Beth is upset.

The morning they are leaving, William kisses Annie (Faithe Herman) and tells Tess (Eris Baker) to keep up with her chess and tells her to go back to sleep. Randall kisses Beth goodbye, and she tells William to take care of Randall and himself; and they are off.

Randall tells William they are going old school, no GPS, they are using maps and William is to be his navigator. William takes the maps and throws them out the window telling his son to just drive, they will get there.

The closer they get, William has flashbacks to his mother leaving him to take care of someone else. She tells him to be safe and good, but she doesn’t want to go with her; she wants him to focus on his gift or art and music. She tells him its time for him to spread his wings.

As they drive, William wants to show him this place called the Peabody, hoping to she Randall the ducks. William tells him it was shocking to see him so vulnerable when he had his mental breakdown; Randall shares his father, Jack (Milo Ventimiglia) used to keep it in check. He explains how Jack would gently place both his hands around his face and tell him to breathe; they would just sit there breathing together until it passed.

Randall shares that Jack was a great father, and he had a great laugh, a laugh like it always surprised him. William asks where he is buried, but Randall says he is cremated; Kate (Chrissy Metz) has most of them, but they spread some at his favorite tree in a park, so they call that his official resting place.

William wants to go so he can pay his respects; Randall protests and William tells him to roll down the window, tune on the music and take him to his father. William asks to speak to Jack alone; he thanks him for doing what he couldn’t, for raising him to the man he is. He is sorry he didn’t get a chance to meet him and says he would have loved to have heard that laugh. William says he would have liked to have met his son’s father. William tells Randall he likes Jack, and to pay his respects so they can get back on the road.

William goes back in time, receiving a letter that his grandmother would have understood why he didn’t come to her funeral. She loves his beautiful poem and says she is staying there to finish up her affairs.

Later, he gets a letter that she got a job, that pays well. She sends another letter, complimenting him on his band doing so well and his cousin being able to stay so focused (in the flashback, his cousin is getting slapped by a woman). She promises to come back soon to see him play.

The band is drinking, but William is sitting at the bar writing music and lyrics. His cousin jokes that he may not be as much fun but women would be a lot safer around him; he apologizes about how he acts when he has been doing some drugs and drinking.

His cousin loves the music, saying he’s been waiting 2 years to get something good, and they practice his song; saying their days as a cover band are officially over. They are starting to enjoy huge success, then one day William gets a call at the bar, and its his mother.

At the motel, William wonders why Randall makes his bed when someone else does it. William struggles to sit up and Randall asks him if he is ready to go back to Memphis; they quickly are back on the road, laughing and sharing stories.

They arrive at the house where William lived with just his mother, he can’t get over how the house looks so different; there used to be 2 doors, now the one has been replaced with brick.

Randall admits that he used to have a bit of an afro, but when he made partner he needed an updated look but when he returned home, Tess was about 3, she looked at him and just began to cry. He said it wasn’t that she didn’t recognize him, she only needed to look past the bricked up front door.

Randall and William knock on the front door, and the couple living there allow him to explore. He immediately pulls a brick out of the fireplace for his treasures… some toys and 3 quarters. William says how strange it is that the world sticks like that. Randall gives them back the brick and thanks them as he leaves.

They share their memories of their dads taking them to the barber shop as Randall gets his hair done. William shows Randall the water fountains in his old school, how one was for white and one was for black. Randall says he has been living with white people for a long time and drinks from the white one; so does William, and they laugh hard about it.

Back in the past, William apologizes for having to leave to take care of his mom, but his cousin tells him to never be sorry for taking care of family. William promises to return with 60 new songs. His cousin gives him money and tells him to pay him back with a notebook full of platinum records. In present day, William walks into the club, acknowledges Ricky, the club owner, who says he knows who he is and to get the hell out of his club.

William shares with Ricky he is dying and Randall discovers Ricky is William’s cousin. After Ricky says Randall looks like his father, he confronts William about waiting for years for him to return. Randall asks how they are cousins and vanishes again when Ricky asked him what happened to him.

William goes to take care of his mother, she tells him she is sicker than she let on and it won’t be long before he can go back to Memphis. He spends a lot of time on the bus, traveling through the city, when one day he meets Laura, Randall’s future mother. They fall deeply in love, taking care of his mother; but Laura gets more and more into the drugs with the neighbors.

His mom begs him to recite the poem she loves so much, as Laura staggers into the room. Once his mother passes away, he drinks and does drugs, admitting to Ricky he was ashamed of what he had become and he is aware he ruined everything and all he came there for was to apologize and thank him for being good to him. William hands him the money and asks Randall to go. Ricky asks him if he is too sick to play.

Ricky and William and the band play on stage, while Randall gets to meet some of his cousins. He is very drunk when his wife, Beth answers and Randall lets her hear him play on stage and informs him that he has 12 new cousins. He admits he is a little drunk but he has a whole other family down here.

William’s mother is singing “You are my sunshine” to baby William, as Randall is making his bed in the motel. Randall says the ducks won’t wait all day; he comes into William’s room who is shaking and looking severely scared. Randall calls 9-11 and William is rushed by ambulance to the hospital.

Randall learns William is not leaving the hospital. A priest is called in to perform his last rites. Randall confronts William on knowing he wasn’t coming home. William takes off his oxygen mask and tells him he has something in his bag for him. Randall wants to call Beth and the girls to come out to hug him, William wants the girls to remember that last kiss, looking up at him, not down!

They reminisce about the day Randall showed up at his door. William tells him to roll all his windows down, crank up the music, grow out that ‘fro, let someone else make his bed. Randall jokes that he likes making his own bed; William tells him to do it then. He deserves the beautiful life he made; he deserves everything. He calls Randall his beautiful boy… My son!!

He tells Randall he didn’t have a happy life; he had breaks and bad choices, a life of “almosts” and “could haves”. Some would call it sad, but William doesn’t because the two most important people in his life was the one at the very beginning and the person at the very end. He thinks that is a pretty good thing to say. Through his tears, Randall agrees.

William admits he is a little scared so Randall sits on his bed, puts his hands gently on his cheeks and says he is okay, and he is good and tells him to breath with him; they breath together. William fades away as they share eye contact.

Randall drives home with his dad’s toys on his dashboard and his manuscript in the passenger seat. Randall stops the cars as a family of ducks crosses the street in front if him. He opens his windows, practicing his breathing,