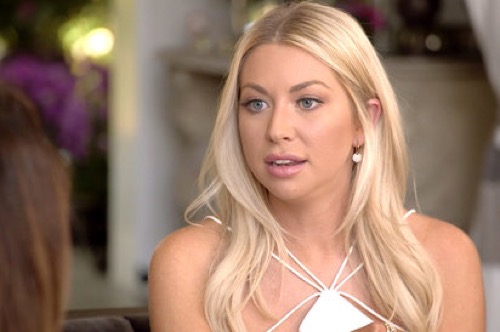 Jax claimed he never cheated on Brittany. But everyone in their circle, as well as Lisa Vanderpump, believed he had cheated on Brittany and what made worse it was the fact it had been with Faith. Faith was a friend of theirs and was therefore also part of their circle as well however Faith wasn’t denying the rumors. She claimed that she did sleep with Jax and that Jax had promised to her. He had allegedly told Faith he was going to break up Brittany and that he wanted to be with her. So Faith had even bigger news to drop on everyone. Faith told James that her period was late and that she could be pregnant with Jax’s baby.

But Faith hadn’t told anyone else besides James because she said she was embarrassed. She claims she truly believed Jax when he said they were going to be together and now that he was telling everyone she’s a liar she realized he hadn’t meant any of it. So Faith hadn’t stayed at that party. She showed up to support Scheana and had cleared her good name though she hadn’t wanted to talk Brittany and Brittany had desperately wanted to talk to her. Brittany had wanted to hear what happened from Faith because she couldn’t be sure Jax wouldn’t lie to her and she needed confirmation that he cheated on her with one of her friends.

The girls had all sided with Brittany because they knew someone as nice and sweet as her didn’t deserve to be cheated on or lied to. But the guys, on the other hand, were more siding with Jax. Jax said the story wasn’t true and so they still thought it might just be a story Faith was telling everyone. So it hadn’t hit Jax’s friends that he could be lying to them as well until James told them Faith’s secret and said Jax could soon be a daddy. And so that had horrified everyone and they had also gotten upset with Jax for running a good thing with Brittany, but the one person that understood how Brittany felt was Stassi.

Stassi had had this idea about possibly working for Lisa again and so she had been over at Lisa’s house when the two started to talk about Jax. Jax had also cheated on Stassi and again it had been with a friend because that time it had been with Kristen. But Lisa noticed that Stassi hadn’t had much of an opinion about herself because she thought it was worse than he cheated on Brittany than when he cheated on her. So Lisa surprisingly tried to talk Stassi out of that mindset. She told Stassi that she had deserved better as well because she had been in love with Jax and he had betrayed her trust.

So it seems like everyone was beginning to turn on Jax. Jax had hurt so many people and had continued repeating the same stupid mistakes. But Jax eventually admitted to Brittany that he had cheated on her with Faith and so that had been enough for her. She had flipped out on him. Brittany had shoved Jax out the door and had started to pack her bags because what she wanted more than anything else were her parents. Her parents were one of the first people she called after the confrontation and many had assumed she had gone home when she suddenly disappeared on them all yet she came back from her break in the end.

Jax was moping around without Brittany and his friends said they had left him balled up on the coach. But Brittany came back in a better place. So her break had been good for her and she’s been talking it out with her friends. Scheana said she could stay with her and Ariana might have loaned Brittany the whip she used on Tom, but Brittany hadn’t need those things she later told her friends that she did do something really stupid. She confessed she had slept with Jax earlier that day because she needed affection and so she hadn’t been able to fully turn off her feelings for Jax despite how much he hurt her.

But the sex convinced Jax that they were getting back together and so he thought Brittany was simply going to get over everything. So while that relationship became poisonous, Stassi went out to dinner with Patrick and she tried to bond with him like how they used to be and something just kept seeming off between them.