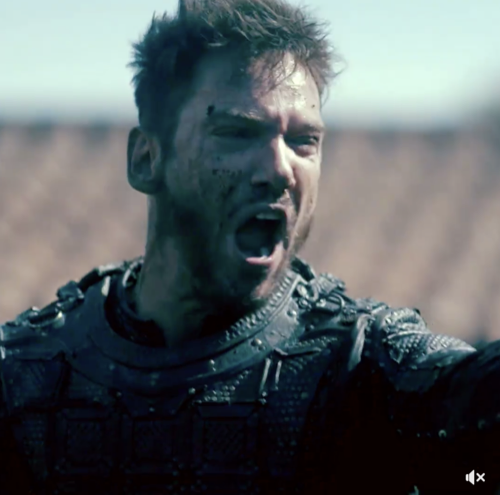 Tonight on the History Channel Vikings returns with an all-new Wednesday, December 13 season 5 episode 5 called “The Prisoner” and we have your weekly Viking recap below. On tonight’s Viking season 5 episode 5 episode as per the History synopsis, “Ivar meets his match in Bishop Heahmund, while Floki returns to Kattegat, and Bjorn receives a lavish welcome in North Africa.”

Vikings begins tonight with the Saxons returning to York, and king Aethelwulf (Moe Dunford) telling Bishop Heahmund (Jonathan Rhys Meyers) that they will bring all the faithful to the cathedral to celebrate high mass and the delivery of York. Heahmund says the Lord works in mysterious ways as the church bells begin to ring out; the men wonder why there are so many rats on the streets as the Vikings wander through the sewer ways under the city.

Ivar (Alex Hogh Andersen) and Hvitserk (Marco Ilso) smile as they see the Englishmen above them. Ivar signals for his people to lift up the ladders and the Vikings rise up through the grates and begin shooting arrows at everyone in the streets. The Bishop gets on his horse and orders the men to save every soul or be subject to a higher power, as there is no higher power than God. Meanwhile, Aethelwulf is in for the fight of his life, beating a Viking with a rock in the head; Alfred the Great (Fredia Walsh-Peelo) is almost killed by a Viking with a massive hammer but he also is able to stab him with his sword and escape.

Ivar watches from above as the Bishop continues to shout for the men to fight. Ivar yells “spears” and laughs as dozens of Saxons die; the Bishop tramples someone and then his horse is shot with multiple arrows. Ivar shouts for them to stop fighting and orders them to give the Bishop his horse, as Heahmund is too great a warrior to fight on foot. Bishop Heahmund kisses his sword, rises off his knees and bows down to Ivar, who then drops his hand and the fighting resumes.

King Aethelwulf is told to take his son Alfred and get to safety as the other Vikings get Bishop Heahmund off the horse, Ivar comes down from the wall. The Bishop screams that he is a Heathen as Ivar laughs calling him a Christian, his men drag him away.

Outside of York, Judith (Jennie Jacques) attends to the wounded, when Aethelred (Darren Cahill) rushes to his father, Aethelwulf as he approaches the camp. Judith learns her cousin Mannel (Paul Reid) died protecting him and they all fear the worst when it comes to Bishop Heahmund. Aethelwulf begins to hit himself in the head, saying he was wrong to believe that God was on their side; that he hadn’t forgiven them. Bishop Heahmund lies shivering on the floor of the cathedral, as Ivar crawls towards him.

The camels finally stop at a camp in the middle of the desert, where they are asked for their weapons and told to relax in the tent after their long journey. Everyone bows down when Ziyadat Allah walks in the room, he introduces himself, even speaking Norse to the Vikings. Halfdan and Bjorn are told they do not understand how the world works there and should just take it as it appears. He wants to make trade deals with Bjorn.

At Kattegat, Torvi (Georgia Hirst) watches as Floki (Gustaf Skarsgard) returns and is welcomed by everyone.

Queen Lagertha (Katheryn Winnick) greets Floki, surprised, saying she never expected to see him again, in this lifetime. He says it is strange for him to be back too and he can still hear Ragnar’s (Travis Fimmel) voice, fondly touching her arm saying they have so many memories they have shared. He tells her, he is more than just the boat builder.

Ubbe (Jordan Patrick Smith) comes in as Floki says he did see the gods and they took him to a special place, he was dead and then he was alive. He tries to explain it that no humans were there, only the gods; Aud the Deep-Minded (Leah McNamara) looks at the others in the room as Floki speaks. Floki says he came back to share it with those who believe in the true gods; those who are pure in spirit and heart, people like him. Lagertha is offended, feeling it wasn’t for her nor Ragnar who were never pure like him.

When she asks him about taking warriors and shield maidens from Kattegat to his special place, she warns him that this is her kingdom and she will protect it and its people; especially when they have every reason to expect another attack from King Harald Finehair (Peter Franzen). The last thing she needs is someone like Floki to take away her best warriors and forbids him from doing it.

Inside the tend, Sinric brings in two women, one for Bjorn and one for Halfdan while Ziyadat enjoys the company of Kassia. Bjorn says his night was very satisfactory as Halfdan reveals that his company was not a she; he doesn’t answer when Bjorn asks him if that is a problem for him.

In the forest, Floki meets with several Vikings showing them to not be afraid because the land has no diseases, no wars and no suffering. It is blessed by the gods in every way; the soil is good for farming and waiting for them to plant. He says they have never seen it because they were waiting for the right people to find it. Floki says they should not bring too many, just enough for a working colony of believers.

Ivar is told the Saxon army has abandoned their camp and left. Ivar suggests to Hvitserk they could pursue them and kill them all but Hvitserk they have more important things to do, like a return to Kattegat to make sure that Ubbe hasn’t convinced Lagertha to crown him King. Hvitserk reminds Ivar he needs to sort things out, he needs to kill Ubbe and Lagertha and become king of Kattegat. Ivar smiles, telling Hvitserk that he is a good man and making more and more sense every day. He thinks in the short term, they should make an alliance with King Harald to take over Kattegat.

Bjorn and Halfdan wake up to Ziyadat yelling at his men because Commander Euphemius was arrested last night but somehow escaped and it is their fault; all three men are beheaded and the guards are ordered to find Euphemius. Halfdan tells Bjorn they haven’t exactly been the best bodyguards.

Floki and Ubbe talk Ivar and their falling out; admitting that one day it is likely they will go to war against each other. Floki looks at Ubbe and says he wouldn’t lie to him about finding the land of the gods, but Ubbe says he is insane.

Back in the desert, two men are bickering about which part of the man’s body they are going to cook for dinner. Everyone sits down for the feast as Ziyadat says these spicy and exotic dishes are in celebration of their trade agreement and are specially made for them by his special chefs and they will be insulted if they don’t eat their fill. He turns to Kassia and tells her he has done exactly as she wanted and they are both free of the monster and laughs as he shares they are eating Commander Euphemius. Ziyadat reveals that he knows about the double cross and Sinric says they need to return to the boats as they are in the greatest danger from Kassia.

Floki joins the group and tells them they are the chosen ones, marking them with the blood on their foreheads. He tells them to prepare the families for the voyage carefully and with utter secrecy. He says he has to disappear from Kattegat and will prepare the boats and will meet in 9 days time and don’t give any indication they are leaving. Floki promises the gods will take care of them as they are doing this in their name. He disappears into the night.

Bishop Heahmund prays as Ivar asks if this is a part of his journey or an interruption of it as they take to the seas. Halfdan looks around as Sinric watches, Bjorn breaks off some wood for a weapon as they try to figure out what to do. Ziyadat and Kassia come out and he signals his men to take Bjorn, Sinric, and Halfdan, they are placed on their knees with swords put to their necks. Kassia approaches them as a sandstorm quickly approaches, but Kassia shouts for them to kill them.