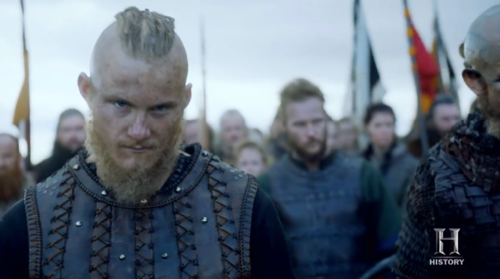 Tonight on the History Channel Vikings returns with an all new Wednesday, January 25, 2017, season 4 episode 19 called “On the Eve” and we have your weekly Viking recap below. On tonight’s Viking season 4 episode 19 episode as per the History synopsis, “The Viking army rampages through the English countryside, while King Ecbert and Aethelwulf seek to defend of the realm.”

Vikings begins tonight with Kattagat opening their fortified gates to some new Viking men; Torvi (Georgia Hirst) inquires about the men but no one seems to know who they are. They claim to be traders but do not buy anything, making the villagers suspicious. They attack but are easily overthrown by the Shield Maidens, including Astrid (Josefin Asplund). Queen Lagertha (Katheryn Winnick) reveals they have come to find weaknesses in their defenses.

The Bishop who was in battle with King Aelle (Ivan Kaye) is brought to King Ecbert (Linus Roache) and his son, Prince Aethelwulf (Moe Dunford). When asked how great the army is, the bishop tells them as many as the blades of grass in the field, before he can say any more he dies at Ecbert’s feet who demands the Bishop has a proper Christian burial.

King Ecbert learns King Aelle died a horrible death. He charges his son, Aethelwulf to go out and face the great army; he asks for more time but Ecbert tells him the element of surprise is more important than building a bigger army. Aethelwulf’s sons want to fight by his side but he tells them they are the future and he won’t risk it. Ecbert stands down and allows Aethelwulf to do it his way.

Ecbert encourages Judith (Jennie Jacques) to return to her husband Aethelwulf as he will need her strength and wisdom. He orders her to forgive him and vice versa, telling her she shouldn’t remain attached to a dying animal like him. She doesn’t want to and he forces her hand commanding her to do so as her king.

As villagers run for their safety, a soldier watches terrified at the number of Viking ships approaching on the river. Meanwhile, Prince Aethelwulf is blessed by the Bishop. He turns to the boys and tells them farewell for now and to fear nothing as they will all be together soon.

Judith sends him with her love and devotion which he responds that he will try to live just as he will try to be worthy of her too. King Ecbert gives him a pep talk about times to love and hate, time for war and time for peace, that it is now the time for war and hate. Aethelwulf shakes his head at his father and rides off on his horse as the villagers cheer him on.

The Vikings ships stop near Repton, Mercia. Ivar (Alex Hogh Anderson) talks about the people they will be fighting, very confident. Bjorn (Alexander Ludwig) says he cannot speak as he hasn’t seen enough nor know enough. Bjorn says they are brave men, he has fought them before. Ubbe (Jordan Patrick Smith) tells Ivar to listen to their older and wiser brother.

Bjorn tells Ivar he cannot break up this brotherhood because they have many challenges ahead of them, but if he breaks them up they will not succeed and if he continues to whine like a little girl he can leave because they don’t need him. Ivar throws in their face that their father, Ragnar (Travis Fimmel) took him to England because he wanted him to act for him, to make sure he was avenged. Floki sits back, laughs at them saying this is what the grunting of the pigs was all about.

Aethelwulf arrives to his army by the beach, they all welcome him with jeering. The soldiers tell him there are a good 3-4,000 men in the great heathen army. They have no doubt that the sons of Ragnar Lothbrok are coming to Wessex to seek revenge on King Ecbert. He tells the men they are going to march towards Repton then.

Helga (Maude Hirst) wakes up Floki to tell him their girl is gone, he tells her it is for the better but she insists they need to find her. Floki finds her blanket in the river and notices her hiding behind a fallen tree. He crouches down and apologizes to her, saying he understands she hates them but returns her to Helga.

Back in Kattegat the horns are blow that their enemies have arrived. Lagertha is watching as her people fight and more and more men arrive to raid the village. She calls Astrid to stay with her and orders Torvi to keep the others at bay. Lagertha sets the men on fire as they enter Kattegat and her people manage to chase them off except for one man, she orders to let him live. Unknown to Lagertha, Torvi lay dead by the wall.

In Repton, King Harald (Peter Franzen) watches Princess Ellisif (Sophie Vavasseur) with her husband, filled with regret admitting he was a fool not to kill her. His brother tells him he was a fool to think she would wait for him, telling him he isn’t married because he doesn’t understand women either and advises him to forget about her.

Harald approaches her, saying he forgives her for not waiting for him. Her husband, Vik (Gary Buckley) says he knew nothing of this arrangement but he is glad the King has forgiven him. Harald removes a hand axe from his cloak and kills Vik; he apologizes to Ellisif and walks away.

Lagertha has the man, Egil the Bastard (Charlie Kelly) in chains, on a spit roasting over a fire pit. She wants to know who paid for his army since he is not an Earl nor a King. He refuses to tell her claiming he doesn’t have time for games. She brings in his wife promising if he tells her, him and his wife can live happily together. He says if he does it, it is for his wife that they may spare her. He admits it was King Harald Finehair who paid him to do it.

Prince Aethelwulf and his army march towards Repton as Bjorn and his great army begin to march towards Wessex. Bjorn and his brothers are told the Saxons are less than a day’s ride away with a large army. Bjorn tells everyone they will camp there tonight and tomorrow they will fight for their father, Ragnar.

Ivar wants to go ahead to see where they will fight, he wants to surprise the Saxons and fight in a way they are not expecting. Hvitserk (Marco Ilso) approaches Ivar and says if they change it, their men will not know how to fight. Ivar says they cannot fight the usual way. Bjorn wants to know why he wants to change the tactics; Ivar invites Bjorn to come with him so they can strategize together. Bjorn agrees.

Princess Ellisif approaches King Harald asking to speak to him. He takes her into a tent and orders her to talk. She apologizes for not waiting and she should have believed him. She lures him to the bed and just as she is about to kill him, his brother comes in and slaughters her, telling Harald it appears that he knows women a lot better than he does.

Aethelwulf and his large army continue along the road when the great Viking army watches them from upon the hilltop. Instead of ascending on the Saxons, the Vikings separate and leave; the Saxons give chase. At the top of the hill, the Vikings have disappeared. Aethelwulf and his army discover them coming up behind them, while the other group is running through the forest.

Athelwulf gives chase to them as the Vikings in the forest kill them with arrows. The Saxons create a wall and approach the forest’s edge, suddenly the arrows stop flying through the air. Aethelwulf comes out from behind the shields and enters the trees, but no one is there. Ivar laughs as Floki sounds the horn and another part of the Vikings army disappears as Aethelwulf gives chase.

As they approach the Saxons again from another angle, Aethelwulf says he will no longer be a fool. He orders his men to go to Repton, where their fleet of ships are claiming if they get to the ships first, they will have the better of this battle. Floki worries where they are going, Ivar removes his helmet laughing that they are going to Repton. Floki laughs that Ivar was right calling him a bloody, mad genius.

Aethelwulf and the Saxons are surrounded by Vikings shooting arrows at them, when he attempts to retreat the Vikings surround them. Bjorn orders his army to attack and Aethelwulf screams to charge.