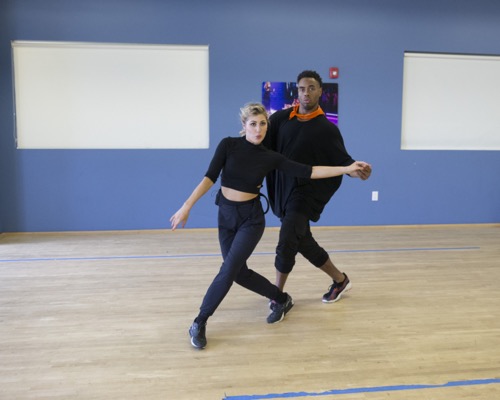 Tonight on ABC the glitz returns to the ballroom as Dancing With The Stars returns for the Finale of season 24 and the remaining contestants will dance two dances – a Redemption Style dance (Viennese waltz or quickstep), and a Freestyle dance – one of the biggest competitive dances of the season. American football running back Rashad Jennings and his professional dancer Emma Slater took the DWTS stage tonight and danced a Freestyle routine to “Let’s Go”/”Uptown Funk” (Medley) from Drumline/Mark Ronson featuring Bruno Mars.

On tonight’s episode, the finalists compete during the 10th week of performances, which includes two rounds of dancing: a redemption dance and a freestyle dance. There will not be an elimination at the end of the night, and the three remaining couples will go on to vie for the coveted Mirrorball.

Judge’s comments on Rashad Jennings’ DWTS Season 24 Finale Freestyle: Len: That was so good, I could even put up with the music. You are the one with momentum going into tomorrow night. Julianne: That was a freestyle! There are some iconic freestyles, and that was one of them! Bruno: Blown away! Sensational, talk about the man of the moment! Everybody will never forget this one! Carrie Ann: You’re naughty because you have been holding out on us. That is how you turn this mutha outa!

Watch the video below and let us know what you think, do you agree with the judge’s comments? Do you think Rashad did enough to avoid elimination tomorrow? Make sure to head over and check out all our DWTS recaps, spoilers, news & more, right here.