Who Won Dancing With The Stars Season 25 Tonight? 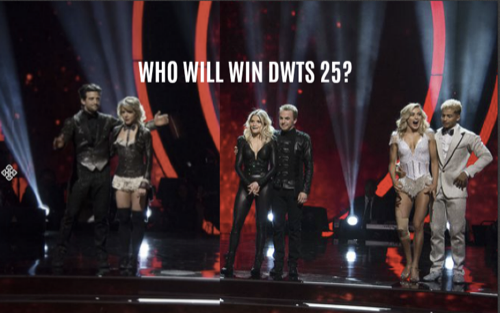 Last night on ABC’s Dancing With The Stars season 25 after weeks of stunning competitive dancing, the final four couples performed. It was the closest race ever with some of the best dancing celebrities have ever pulled off. Frankie Muniz and Witney Carson, Jordan Fisher and Lindsay Arnold, Drew Scott and Emma Slater and Lindsey Stirling and Mark Ballas one last night of competitive dancing, vying to win the judges’ and America’s votes to be crowned the “Dancing with the Stars” champion, culminating an incredible season.  By the end of the evening, Drew Scott and Emma Slater were sent home.

On tonight’s final episode as per the ABC synopsis, “will be a Christmas spectacular as the three finalists advance to the final stage of the competition. There will be live dancing and show-stopping performances. The couples will each perform two dances. The first will be a repeat performance of their favorite dance from earlier in the season. And in the last element of competition, the couples will perform a new routine as part of a “24-Hour Fusion Challenge,” in which they will each fuse two contrasting dance styles, and they’ll have less than 24 hours to prepare. ”  By the end of the evening, one couple will be named the Mirror Ball Trophy winner.”

Everyone has gathered in the Grove for the grand finale of this amazing season; last chance voting is now closed! The results are about to be announced.

Erin announces that with combined scores, the couple who landed in THIRD PLACE: is Frankie Muniz and Witney Carson.

When we return, Tom and Erin welcome us back to the 25th season finale, as it all comes down to this moment. He touches the Mirrorball Trophy as Tom announces the new winners of Dancing with the Stars are Jordan Fisher and Lindsay Arnold. Tom reminds fans that they will see us in the Spring for a special four week all Athlete edition DWTS.