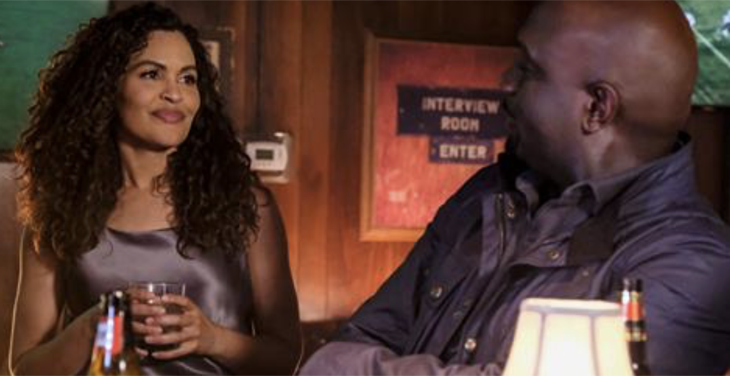 Tonight on CBS their new crime drama Wisdom of the Crowd premieres with an all-new Sunday, November 5, 2017, episode and we have your Wisdom of the Crowd recap below.  On tonight’s Wisdom of the Crowd season 1 episode 6 “Trojan Horse,” as per the CBS synopsis, “Cavanaugh needs Sophe’s help to locate the source of a deadly online challenge that is targeting vulnerable teens.”

Tommy watches a video of a 15-year old that recently died. In the video, he is seen committing suicide. Tommy doesn’t think something is right. He knows who to bring it to.

Jeff and Sara look at a picture of Mia. There is a sub-group out there that has questions about a sweater in the background.

Tommy comes to visit Jeff and Sara. He has some questions about what their technology can do for his case. With so much background noise in the video, he can’t hear what Evan’s last words were. They look at the video. After some research, they determine that Evan is speaking Russian.

Jeff calls Tommy to tell him that they think Evan took part in a suicide pact, a new trend where kids follow steps to immortality. Tommy is on the scene of a second suicide. Tommy, Jeff and the gang get together to look at their findings. They need to figure out who these kids are connecting with online.

Sara goes with Tommy to visit Evan’s home and to look through his room. Sara would like to borrow Evan’s computer. The parents are okay with it. They just want answers.

Jeff talks to a Sophe user about who she thinks could fit the profile of a cult leader. He isn’t sure if he should post the story because he doesn’t want to glorify suicide. The user tells him that is a myth. He should post it to raise awareness. He gives the team the go ahead.

The computers go crazy. The users think that the sweater in Mia’s apartment could lead to her killer. It is not her sweater, it is a men’s x-large.

Sara goes to visit a new victim named Zoey who has been playing the game. Zoey refuses to talk or tell them anything. Sara tries to reason with her. Sara tells her mother to take away her phone and her computer. Zoey gets upset and heads to her room. Her mother asks them to leave. Tommy wants to know if Sara is okay she is really getting upset over this case. On their way out, Sara sees a bumper sticker on, the same one she saw in Evan’s room.

Back at the office, Tareke and the others create a fake profile to reach out to someone they think is running the game. Tareke acts a bit domineering. Sara gets mad and yells at him. She leaves the room. Jeff follows her. He knows this might be hard for her because her brother killed himself 15 years ago. She is fine, she tells him. He tells her to take all the time she needs.

Josh and Tareke head out around the city to see where the stickers are being given out.

Sara gets a direct message from an anonymous user who wants to help. They connect with him via video. He keeps his face blurred and his voice unrecognizable. He wants them to send him a scan of the sticker. He has equipment and connections that can help them.

Tommy follows a lead on a suspect named Jason. He tracks him down and brings him in. Jeff comes to the station and watches as Jason is interrogated. He is cocky and arrogant. He calls his stickers just an art project. He rejects any wrongdoing. But he does think this little game gets rid of weak people. Tommy has to use force to get Tommy to open his phone with his fingerprint.

The team gets to work trying to figure out what Jason has been up to and to find all of his victims. Josh tracks one down who is about to jump. Josh tries to connect with him. It works. The young boy doesn’t take his life. The cops arrive and he goes with them.

They realize Zoey is one of his victims. They call her phone. Her mother answers. She checks her room. Zoey is gone. She is on top of a building. Sara is mad at herself because she told the mother to take away her phone. Jeff and the gang put out a post on Sophe trying to track down Zoey. Two men spot her. They follow her. Josh connects with them. Sara takes the phone to the office. Sara tries to talk to her. Zoey stands on the ledge while Sara confides in her about her brother and how he killed himself.  She begs her not to take away memories her brother deserves to have, to rob him of his big sister. Zoey’s mom shows up. Zoey gets down.

Jeff comes to Sara. He hugs her and tells her she is incredible. Tommy watches as Jason is hauled off in handcuffs.

Jeff and Sara kiss their way through the front door. A computer alert comes in about the sweater. Sara posts the designer of the sweater. There were only 1,000 created.

The suspect gets an alert from Sophe. He takes the sweater off and puts it in a dumpster. He walks off.