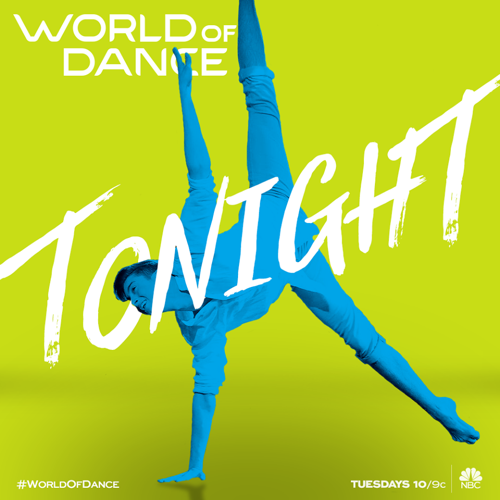 Tonight on NBC the World of Dance premieres with judges Jennifer Lopez, Derek Hough and Ne-Yo with an all new Tuesday, June 6, 2017, episode and we have your World of Dance recap below. On tonight’s Word of Dance season 1 episode 2 as per the NBC synopsis, “The qualifiers round continues as elite dance acts compete.”

On World of Dance the best dancers in the world will compete for the title of world’s greatest dancer, any style, any age for a prize of $1,000,000. Jenna Dewan Tatum is the host. Dancers will compete within three divisions: Junior (under age 18), Upper (up to 4 dancers, 18 and older) and Team (5 or more dancers, 18 and older). Dancers will be judged on a scale of 0-20 in five different categories: Performance, Technique, Choreography, Creativity and Presentation for a maximum score of 100.

Each dancer will battle it out in four rounds: The Qualifiers, The Duels, The Cut and The Divisional Finals. The division finalists will compete in the finals for a prize of one million dollars.

Jennifer Lopez, Derek Hough and NE-YO will judge each performance. The first group to perform is The Lab from California. They are in the Junior division and will do a Hip Hop dance. Their coach describes them as a group of kids from difficult life circumstances who have persevered. Jennifer found them very professional and exciting. They were fearless. Derek thought they were first rate competitors. NE-YO thinks they set the bar. NE-YO gives them a 90 while Jennifer and Derek score them a 92. The Lab will move on to compete in the next round.

Fik-Shun is a 22 year old street dancer from Nevada who won Season Ten of “So You Think You Can Dance”. He competes in the Upper Division and dances to “Unsteady”. Jennifer could feel his emotion as he danced. She is moved to tears. Derek was on the journey with him as he danced. NE-YO thought his performance was like water, it just flowed. Jennifer gives him a score of 92, Derek a 91 and NE-YO a 90. He will perform in the next round of competition.

The Miami All Stars are 19 dancers from Florida. They are first and second generation Americans from South America. They will perform a Jazz dance in the Team division. They are not professional dancers and all work other jobs but are hoping to live the dream. Derek loved their energy and power. NE-YO thinks they needed to be more dynamic. They were good but not great. NE-YO gives them a 78, Derek gives a 82 and Jennifer a 82. They just make it with an average score of 81 and they will move on.

The next act is in the Upper division and is a duet of 19 year old Luka and 16 year old Jenalyn from Canada. They will perform a ballroom dance. They are a big hit and NE-YO was impressed with the dance. Jennifer and Derek give them several tips on how to improve their performance. The scores come in as Jennifer 89, Derek 88 and NE-YO 83. Their average is 86.7 and they move to the next round.

Quick clips are shown of Kaeli and Brandon, Fuze and JJ and Joey. None of them move on in the competition. The Hip Hop act from Norway called Quick Style perform next in the Upper division. Dance for men is not popular in Norway and they hide their interest in dance from their family when they first got started. They are excited to be performing in America. Derek was impressed with their risk of dancing Hip Hop to a Dolly Parton song. He thinks it paid off. Jennifer was impressed with how in sync the group was with each other, both physically and emotionally. Derek gives a score of 87, NE-YO an 85 and Jennifer an 88. The average score is 86.7 and they move on to the next round of competition.

The last act of the night is Nick from Florida who will perform a contemporary number in the Upper division. His mother owns a dance studio and his father always encouraged him to dance. His dad died when Nick was just 13 and the night of the performance is his dad’s birthday. All three of the judges stand as Nick finishes his dance. Jennifer was so impressed with his strength. NE-YO thinks Nick has the “IT” factor. Derek could feel his emotion. The scores are NE-YO 85, Derek 87 and Jennifer 89. Nick’s average is 87 and he moves on to the next round.