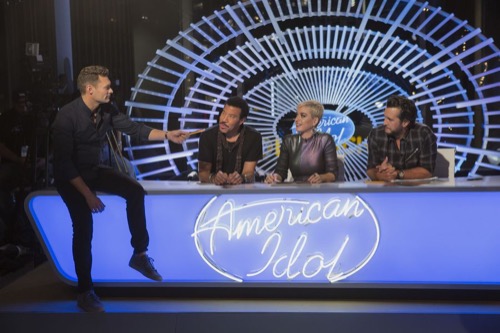 The first contestant tonight is Crystal Alicea, she was bullied for years and feels she is very fortunate to have a wonderful boyfriend who helped her through everything. Crystal is singing, “Lady Down.”

Luke: “You finished unbelievably wonderful, that song means a lot to you.” Crystal says that the song means a lot because it is about her relationship with her boyfriend. Katy: “First and foremost you have a fantastic personality, you have the it factor, you are funny and down to earth. I am happy you opened up, I can’t believe you have only done karaoke.” Lionel: “It wis really refreshing to see an artist be who you want them to be.” All three judges say yes and they call her boyfriend in and tell him that she is going to Hollywood.

Kristyn Harris realized that she wanted to be a singer at 14, she trains horses and lives on a ranch. Kristyn is singing, “I wanna be a cowboy sweetheart.”

Luke: “You are a one woman show which is amazing. You have a great voice, I think you are still learning your voice somewhat.” Katy: “I think you a very interesting, unique delivery – it is very special.” Luke is a yes, Katy is a no and Lionel is trying to figure out where her voice is going to fit; she walks out with a golden ticket, Lionel said yes.

Jonny Brenns is very tall, he is dutch and his parents don’t know he is auditioning. He is singing an original song about a lady, called “Blue Jeans.”

Katy: “You got a face that’s good looking, there is this sweet little sexy thing you got going on.” Luke: “You got this sweet voice, like Michael Buble.” Lionel: “If I can work with you another year or so, I would say yes, but now it is a no.” Luke says yes and so does Katy. Katy calls his mom, speaks to her and so does Lionel to show his parents that he was actually there.

Ricky Manning has been trying to support himself while singing in LA and is singing an original song called, “LA is lonely.”

Katy: “That was so pretty, you are an exceptional song writer, I related to it so much. I moved here when I was 17 and I was very lonely sometimes and felt very lost.” Lionel: “As a songwriter speaking to a songwriter, you are a songwriter.” Luke: “You are really good.” All three judges say yes, Ricky is going to Hollywood.

Effie Passero moved five months ago and is still trying to build her empire. She is playing the piano and singing an original song.

All three judges get up and give her a standing ovation. Lionel: “You are our secret weapon.” Luke: “You are presence, you have a whole thing going on and when you deliver that with the way your voice is, it’s like a command.” Katy: “We have been waiting all day for this, that was exceptional and can’t wait to spend more time with you.” All three judges give here a resounding yes, she is going to Hollywood.

Johnny White was adopted when he was seven and things were not easy, his sister took care of him; music was his therapy. Johnny is singing, “This is a man’s world.”

Katy: “You were like, I’m going to sing like my life depended on it.” Lionel: “That was the whole show in one song. Every time you want to explode, just don’t do it in the first verse.” Lionel gets up and asks Johnny to sing another song, he does with Lionel beside him. Luke: “You are so inspiring.” Luke, Katy and Lionel say yes.

Caleb Lee Hutchinson brought his parents with him, they are his biggest fans. He has been playing music all his life, he has been playing guitar since he was twelve. Caleb is singing, “If it hadn’t been for love.”

Lionel: “Love that you are 18, your voice is very strong and powerful.” Katy: “You have a very lovely voice, a really fast bravado which is unusual in a male voice. You are very comfortable and centered, it is really hard to find.” Luke: “You have a nice voice, you have a nice bravado but don’t over do it.” Luke says yes, Katy says yes and so does Lionel – Caleb is going to Hollywood.

Shannon O’Hara is 17 from North Carolina and she is a nanny full time, she helps support her family since her father lost his job. Shannon is playing the piano and singing, “When we were young.”

Lionel: “The music business is an interesting business in terms of your audience, American Idol we are talking masses of people. I was looking for realism and conviction and that is what you gave me.” Katy: “Have you tried to be a gospel singer, you are a really old soul, you have an exceptional voice and you really made me feel it. There is something really special about the quality of your voice.” Luke: “I like your voice, you are like a little song bird.” All three judges say yes, she is going to Hollywood.

Amelia Hammer, her father wrote a lot of songs from the sixties, one was Great Balls of Fire, she met him for the first time when she was sixteen. She got connected to him when he was in his nineties and wants to carry on the legacy. Amelia is singing, “Give me shelter.”

Lionel: “You are so sultry.” Katy: “I am surprised that you are here and not a major artists yet, you are top ten material.” Luke: “You are one of the most put together artists.” Three votes for Amelia, she is going to Hollywood.

Milo and Julian Sposato one is more talkative and funny, they balance each other out in a great way. Milo and Julian are singing, “Runaway Baby,” by Bruno Mars.

Katy: “That was dope, you are both serious about music and that is cool. You could be Instagram models, I am totally in.” Lionel: “I love that this is getting really good and mess the arsenal up.” Luke: “What was really good was when you were singing together, both of you were amazingly interesting.” Three yes votes, the twins are going to Hollywood.

Les Green came from a poor beginning, what he lacked in riches he gained in love. Les is singing, “A change is going to come.”

Luke: “You are a Ferrari when it comes to singing, you are rugged and raw, full speed ahead.” Lionel: “I like the rawness, it is just so strong.” Katy: “I love your own personal style.” Three yes votes for Les.

Maddie Zahm works with special ed children, music is her passion – she put on a hundred pounds in one year in high school due to a health problem. She credits her confidence on her best friend Marcus who has Down Syndrome. Maddie is singing, “New Rules.”

Lionel asks Marcus to get up and sing with Maddie – they sing Fireworks. Katy: “You have a set of pipes on you, you have a lot of potential.” Luke: “Sometimes you are a little timid, but you got it.” The three judges give her a yes,she is going to Hollywood. Then the judges, Maddie and Marcus posed for a picture.