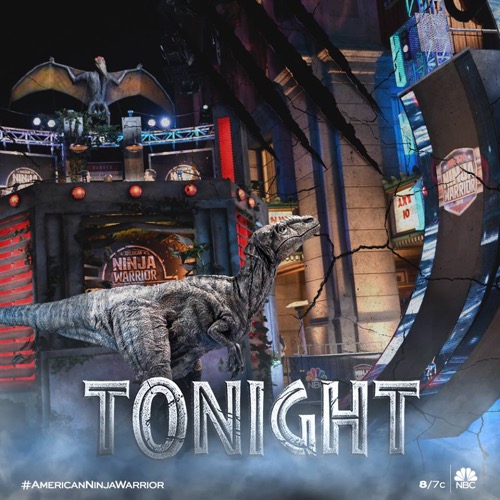 Tonight on NBC their obstacle course competition American Ninja Warrior returns with an all-new Wednesday, June 6, 2018, episode and we have your American Ninja Warrior recap below! On tonight’s “Los Angeles City Qualifiers,” season 10 episode 2 as per the NBC synopsis, “Dinosaurs from “Jurassic World: Fallen Kingdom” invade the course during the Los Angeles qualifier along with a special appearance by the film’s stars, Chris Pratt and Bryce Dallas Howard. The competition features six obstacles, including the new “Jumper Cables” and “Doorknob Drop.”

It was Jurassic World Night on an all-new episode of “American Ninja Warrior” with tonight’s celebrity guests Bryce Dallas Howard and Chris Pratt joining the cast for the LA City Qualifier.

The qualifier in LA has combined new obstacles as well as some of very familial tonight. There was the Floating Steps, the Jumper Cables, the Spinning Bridge, the Sky Hooks, the Doorknob Drop, and two versions of the Warped Wall. The Mega Warped Wall was an eighteen-foot tall wall and it came with an automatic gain of an additional ten thousand dollars however the Minor Warped Wall stood at fourteen feet and would guarantee the top runners a chance at the LA City Finals. So with a lot on the line, a returning breakout star decided to give this new course a go. Zhanique Lovett hadn’t been all that prepared when she first debuted and with all the great feedback she decided to put this year course her all.

Zhanique grew up in a household riddled with substance abuse and had been lucky to receive a second chance. However, she had needed several chances this time around. She had had problems with passing from the Floating Steps to the Jumper Cables and she also suffered some setbacks on the Sky Hooks. Those truly did test his arm strength and so it wasn’t a surprise when she struggled to hang on during the Doorknob Drop. She eventually fell on the second to last obstacle and depending on her timing she could still make into the City Finals. The next three contestants would also fall before making it to the Warped Walls and so hopes were high when Ruben Arellano went up.

Ruben came from a small border town and had his beloved grandmother there in the audience cheering him on. She loved him to call him goat because he was always jumping around and he had wanted to make her proud of American Ninja Warrior. He too had suffered some setbacks on the jump to Jumper Cables and he also lost some grip strength during the Sky Hooks though his great run came to an end on the Doorknob Drop. Now, he would also have to wait to see if his timing alone would qualify him for the City Finals! The next contestant to go up was Thomas Kofron. He was a firefighter and had had to deal with the latest deadly fire that nearly consumed his parents’ home.

His family was thankfully one of the lucky ones because they had a home to return to after everything and so Thomas’s parents most of all were the ones cheering when he went up. He had no problem with the first obstacle and had even got cocky when he took off his shirt for the second. Thomas was rookie and he managed to sail through the obstacles. He was the first to move past the Doorknob Drop and he played things smart because he didn’t try going after the Mega Warped Wall. He stuck with the fourteen foot wall and made it up there with good timing, so he was the first person of the night to finish the course. There would be a few more that would try to get as far as Thomas and no one would have the crowd on their feet like Kevin Bull did.

Kevin was a five-time ninja veteran and he had no time with most of the obstacles yet it was the Doorknob Drop got the best of him. There had been a few of the doorknobs that turned while he was holding on and that combined with the drop that saps the ninja’s energy. It sure knocked out Kevin and this was the first time in his history that Kevin won’t be moving on from the qualifier. But moving on, there had been some goods. Sean Bryan aka the Papal Ninja had made it to the Warped Walls and, while he couldn’t make it up the Mega, he did make it up the minor Wall to become the second person to complete the course.

The next Ninja up was Tiana Weberley. She was known as Sweet tea and her training partner in the Ninja world was her mother Teresa. Teresa was sadly diagnosed with diabetes that was slowly taking its toll on her and so Tiana had come up with workout to ensure they were both keeping fit. Tiana had a gymnastics background and that served her well tonight. She raced through the course and was making great time until she dropped in the water at the last doorknob. That alone meant she should still make it to the City Finals. The ninja that followed her was Grant McCartney. He a fan favorite from Hawaii and he was back with his little brother Colton via Skype. The two of them have lost a lot of people that they love and so that made them closer than ever.

While Colton couldn’t make it out this year, Grant still had a lot of friends there and his family side was represented by his dad. His dad was an athlete and so Grant grew up training. It might not have been the traditional sort of training for ANW however he danced throughout it and even when his run was abruptly ended it wasn’t because he fell. He landed on the mat and it was his foot that grazed the water and so he was disqualified! Grant could have been torn up about it and he wasn’t. He was his usual cheery self and he stayed around as the next ninjas went up. The next ninja was Cody Johnston. He was a ninja with a message because he lost both his mother and grandmother to smoking.

They were advised to stop and refused to listen until it eventually killed them both. Cody said that as long as he stopped one person from smoking that he would consider it a win. Unfortunately, that was the only win he received tonight. He made it to the Doorknob Drop and had dropped halfway through the middle. It was upsetting and he probably wished he had conserved his upper body strength, but he made it far and tonight not a lot of people could say that. There hadn’t been a lot of people that finished the course and so it easy to think of it as jinxed until it was Selena Laniel’s turn. She too was a five-time veteran of American Ninja Warrior having first started out on the show on the fourth season. And everyone hoped this was her year.

Selena had made it the farthest she ever came when she made it to the Doorknob Drop and so she could take that as a personal victory. She did however drop on the Drop and that particular obstacle proved to be the bane for many a ninja. It was until Josh Levin that someone managed to mass the drop and finish the course. He was a professional rock climber and had won lot of fans that watched him be the third person to finish the course, only there were still a few surprises left on tonight’s episode. The next ninja following Levin had been fan favorite Natalie Duran and she shocked everyone when she wiped out early on the course. No one was expecting the four-time veteran would drop so soon in the game!

Thankfully, Natalie’s training partner still had one more person to root for. Nick Hanson was the Alaskan Ninja and he had both friends and family cheering him on as he faced the dreaded Doorknob Drop. The crowd chanted his name when he was on the obstacle and they cheered when he safely dismounted at the end. So it all came down to which Warped Wall. His training partner Grant McCartney told him to go after that ten thousand dollars and tonight he became the first person of the night to make it up that Mega Warped Wall. He had been shocked and even the commentators had rewind the scene because they couldn’t believe their eyes when they saw that he actually had additional inches on that Mega wall.

The next ninja went up also had a reputation. Flip Rodriguez was known as the Flipping Ninja and there were high expectations for him because he once made it up a nineteen foot wall. Everyone was hoping he would be the next to conquer and sadly he fell on the Doorknob Drop. He dropped and many didn’t think anyone would get as far as him yet Brian Rambo was a dark horse. He was a thirty-eight year old rookie and his family recommended him for American Ninja Warrior because he had his own obstacle course at home. And so were many were skeptical of him until he flew through the course with the fastest time in the competition. He apparently had no problem with the Doorknob Drop and was wise to go after the smaller Warped Wall.

Brian Rambo finished the race with the fastest time and no one will be forgetting this rookie’s name anytime soon. Rambo was soon joined by veterans Brian Kretsch and David Campbell who both finished the course with good timing. Yet, the last ninja of the night was someone everyone knew. Adam Rayl began on the show two years ago when he started as a walk-on and since then he’s become an incredible athlete. He raced through the course and conquered the Mega Warped Wall with flair when he somersaulted on it to the finish line!