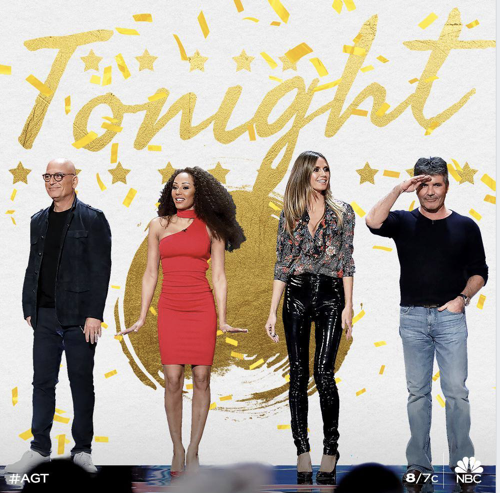 The first act tonight is five years old Sophie Fatu who loves making desserts, clothing, and princesses. Sophie doesn’t want to win money, she just wants to sing for everyone and make them happy. Sophie tells Simon that he is her favorite judge and she sings Frank Sinatra’s “My Way.” A standing ovation from the audience and all four judges. Four yes votes from the judges, Sophie is going to the next round.

The next act are a couple who broke up a year ago but decided to continue their act on the AGT stage. Sixto and Lucia are quick outfit changers. The duo changed outfits so fast and to “Lets Get Loud” by Jennifer Lopez. Simon said this was once of the best acts that he has seen, a great act and just perfect. Howie agrees, he has never seen such quick movement. Mel B says it is entertaining and slick. Heidi said it was so great, she loved it. All four judges give them yes votes ad the audience gives them a standing ovation.

Noah Guthrie landed a role on Glee after first becoming a YouTube sensation. Noah’s passion is singing and he chooses to sing “Love on the Brain” by Rihanna. Al four judges and the audience give him a standing ovation. Howie thinks he is wonderful and unique. Mel B says he killed it. Heidi loves his sexy voice and the fact that he is humble. Simon says he is current and this is his time now. All four judges give a yes vote, Noah is going to the next round.

Seth Wood is from Los Angeles, he grew up in a large family in Texas. Seth got bit by the performing bug and he gets a lot of inspiration from nature. Seth comes on stage dressed as a caterpillar and transforms into what is supposed to be a butterfly. The act is so ridiculous and at times pathetic. All four judges hit there X buttons and the audience boos. So inappropriate, he is wearing no underwear under his costume. Simon says it was the worst act ever and Tyra comes on stage and sprays buy spray on him.

The Future Kingz are from Chicago, they are all best friends. The boys are hip hop dance group with fast foot moves that look incredibly impossible but they pulled it off. The audience loved it and so did the judges. Mel B loved the choreography, said it was on point. Heidi wants to see more. Howie says there is a joy that they show. Simon says it was very powerful, cool with lots of energy and his favorite act of the day. The smallest member of the group, asks Howie if he has any donuts. All four judges give them yes votes, they are going to the next round.

Front Pictures is two men who use technology to show the danger of technology taking over the world. In this imaginary world the character is seen flying, running, snowboarding and swimming in a video game environment. Howie loved the creativity, he says it was amazing. Mel B said they blew her mind, well done. Heidi said it was one of the best things she has ever seen. Simon says it was perfection. All four judges give yes votes.

Miss Trysh is 57 years old and put her singing on hold to raise her family. Trysh loves Simon, the chance to hug him would be everything to her. Simon says Trysh is very naughty, he admits he has a crush on her too and gives her a yes. Heidi says it was the whole package, loved it and also gives a yes. Howie thought she was amazing, but felt that she and Simon should get a room, he gives her a yes. Mel B is also yes, she is going to the next round.

Lord Nil is an escape artist and he will be doing a dangerous act, he is not afraid of death, he challenges. He ties his hands together and has 90 seconds to cut himself free otherwise 30 venomous scorpions will fall into a box that his head is inside of. He has a knife, but he drops it and then he bends the bar that is attached to his arms to hold the ties onto, miraculously he gets loose with 1 second to spare. Howie is truly amazed. Heidi has never seen anything like this before and she is very impressed. Simon was on the edge of his seat and can’t wait to see what he does next week. Four yes votes, he is through to the next round.

Hans says he is an international superstar, more famous than Lady Gaga and Madonna, and is going to make a global sensation. He starts with a German sing along and plays an accordion, but loses it and starts singing “Proud Mary” with two backup singers – he ends the act with doing the splits on two chairs. Howie can’t stop smiling and laughing. Mel B says she laughed and it made her heart feel warm. Heidi says in German that she is really proud of him. Simon liked it, but says he shouldn’t have. All four judges give yes votes.

Samuel J Comroe was diagnosed with Tourette’s syndrome as a child and uses it in his comedy act. Samuel wants to turn his Tourettes into something positive by making light of it. Mel B says he took his diagnoses and made it positive. Heidi is also very impressed and thought he was funny. Simon found he was fantastic and really liked him. Howie agrees, it is tough to make someone laugh. Four yes votes, he is going through.

Courtney Hadwin is 13 years and she is very shy, she doesn’t speak much to the children in her school. Courtney surprised everyone with a rock performance and dancing all over the stage. Howie was blown away and compares Courtney to Janis Joplin and says that she signed on the spot by Clive Davis and although he can’t do that for her, he can hit the golden buzzer – he says she is from another era. Courtney advances to the live shows. Howie goes on stage and hugs Courtney.