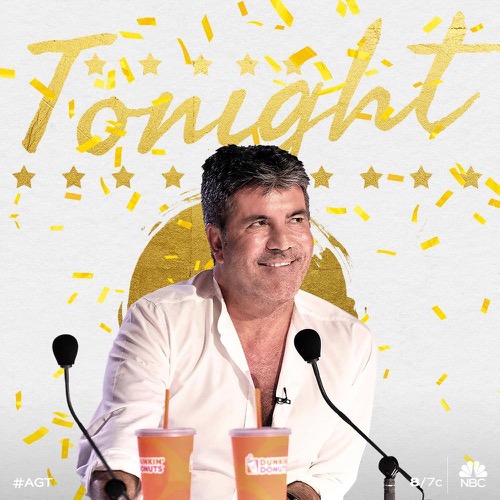 The contestants have to be the total package to get ahead on tonight’s all-new episode of “America’s Got Talent”.

The auditions continued on for another night, but this time they began with the Voices of Hope Children’s Choir. The choir was led by the musical director Ms. Sarah and they originally hailed from Orange County, CA. Another thing that should be said was that the group was quite large. There were about seventy kids and somehow their director managed to wrangle them all for an incredible performance of “This Is Me”. The judges were all moved by this performance because who doesn’t love to hear talented children singing and so the only problem the judges faced was whether or not this performance would have been enough if the choir hadn’t been children. Both Mel B and Simon wanted the choir to up their game going forward and Heidi was a “yes” right off. The lone wolf with this act was Howie.

Howie enjoyed the performance for what was it was and said he had to say “no” because it wasn’t strong enough for this show. It was harsh however Howie truly believed in what he said and while he hadn’t been able to convince the others into letting them go on to the next round in the competition – the cutest choir ever were put on notice. The next act called themselves by their name. Misha and Quin was a guy named Misha and a woman named Misha. The two weren’t together and Misha was actually married. She used to dance with her husband and then dumped as a dancing partner when he got too old. Now, this husband talked to Tyra and he said it had been an adjustment. And so he wasn’t quite as happy as he could have been and all the same, he still found the dance amazing.

Quin was seventy-one and she still wowed the judges with how she could dance. She and her partner were given an all “yes” by the judges and luckily for them they know various forms of dance, which could be a win for any dancer on the show. The next contestant was Lior. He was a Mentalist from Israel and he told the judges about his specialty in telekinesis. The judges tended to doubt psychic abilities and so they wanted to be wowed yet Lior managed to combine his magic tricks with a sense of humor. It was that humor portion that eventually won over Lior and, while Heidi gave him a “no”, the three remaining judged decided to give him a “yes” because he made them laugh. He just had this face that was so serious even as he was whipping everyone into laughing frenzy.

The next act of the night was a teenager. Jeffrey Li was a singer all the way from Toronto, Canada and tonight he chose “You Raise Me Up”. He said if he won a million dollars that he would get the dog he wanted because he was an only child and a dog would make him less lonely, so Simon said if Jeffrey impressed him that he would get him that dog. Jeffrey really wanted the dog and he gave an amazing performance all in the hope of getting that dog. Only Simon let him wait until the very last minute to find out whether he was getting a dog. He let the other judges have their say first and they had all been quick to tell Jeffrey that they loved his voice. He had amazing sense of control and so they all voted “yes”. Meaning Simon’s opinion only mattered because of the dog and thankfully Jeffrey was going to get his German Shepherd.

Simon was a man of his word. Neither he nor Jeffrey had even bothered to clear that dog with Jeffrey’s parents and so that was something Jeffrey was going to have figure out on his own. Now, the next act of the night was bit of a play. The lights were dimmed and slowly a whole story was told onstage by people wearing neon suits, so all anyone truly saw these suits telling a story. The group that came up with. It was quite a heartfelt story and so Simon thought it would have a happy ending. And instead what happened was that both men standing in for good and evil perished when they exploded. It was still beautiful visionally and the judges gave them an all-around “yes” because it was something they had never seen before.

Now, not every act made it forward. There were a few acts that weren’t quite ready for the show and so Daniel Emmett tried to shine in his own way. He wrote a Italian operetta and he had an incredible voice, so he sounded beautiful but the audience wasn’t connecting. They weren’t a big fan of the song and Simon stepped in because he noticed. He cut off Daniel’s son and asked him if he perhaps had another song prepared tonight. He didn’t and so Simon gave him a task. Simon gave him a song and asked him to learn within a short amount of time because he wanted to hear Daniel sing something that might move the audience. So Daniel went away to learn a song in an hour and in the meantime several acts went up. There was a nice singer named Lauren and unfortunately her voice wasn’t quite up to par. And so Simon looked to Daniel to wow him.

Daniel Emmett from Rochester, NY was given a rare second chance and he came back to that stage knowing an obscure song that Simon once heard on the street. He not only knew the song, he also sung it so wonderfully that the audience connected this time. They loved him and he wowed the judges including Simon. Simon said he thought Daniel did the song proud and the judges had merely been amazed that Simon hadn’t set him up after all. They thought that when Simon gave him a song that only Simon knew or heard and so each gave Daniel a “yes”. He was moving on in the competition and he was doing so with Simon’s respect. Now, the next act was Westby. Westby hailed from Japan and he had an interpreter.

Westby came all the way to the states because he figured AGT was one of the world’s most famous tv shows and so he introduced everyone to unusual act. It was quite magic and it was quite stripper. It was something in the unfortunate middle and it wasn’t done that well. It was a Japanese form of humor and it didn’t translate, so the audience booed him. They booed him until his act was over and the judges made their decision. The only one that said “yes” to Westby was Howie and he might have done that because the ladies pressed the buzzer “no” in the middle of the act meaning he was never going to progress any further on the show. With Westby leaving a very naked memory behind, the show moved on to Mary and Tyce. The two were a married duo called Duo Transcend and they were a trapeze act.

There was just one thing wrong with this particular duo. They were doing dangerous stunts even more dangerous because the husband has an eye condition. He needs to get his eyesight fixed and until he does he and his wife have based their interactions on just knowing each other’s bodies. Everyone doubted they could carry out a trapeze act with a man that couldn’t really see and somehow they did it. They carried out a one of a kind act which could be hard in such a competition and only three out four judged loved it. Mel B said that certain parts of the acts had wowed and that she hadn’t been fully there. She later would vote “no” and the three other judges decided they loved it enough to say “yes”.

Mel B said she was waiting to be blown away and that definitely happened with this next act. The next act was a female daredevil. Her name was Annalise Nock and she was the daughter of Bello Nock who was on the show last year. It seems he gave his daughter the need for danger and so she decided to one-up. She brought the audience and the judges outside so that they could watch her blow herself up. She went into a box and then had that box blown to smithereens. Annalise was thankfully ok afterwards because she said the adrenaline was keeping her from feeling too much and so the judges could help themselves. They all gave her a “yes” because its not like there were people blowing themselves up every night on the show.

Annalise’s story as a woman breaking into a male dominated world truly resonated with everyone. That didn’t happen with everyone and so the next time it did it was with Amanda Mena. She was a fifteen-year-old teenager that turned to music because it helped her in her time of need. She immigrated to the states with her parents when she was very young and she was bullied because she didn’t know a word of English. So turned to music and that along with her mother got her through it. Tonight, she sung “You Make Me Feel” for the judges and she showed that young girl that was bullied grew up to have an incredible voice. It was so beautiful that it got the first golden buzzer of the night.

Amanda will be joining the others as they all vie for their chance at a million dollar cash prize.