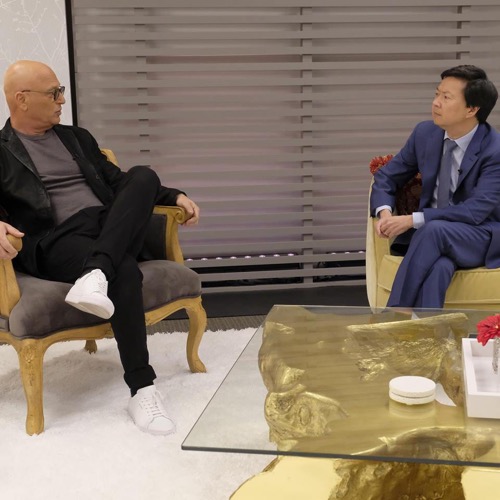 The auditions were over! It was now time for the judges to decide who will continue on and so the first round of Judge Cuts were brutal. They had over forty acts and had to cut it down to seven for the live-shows but the judges had some assistance in making it through the night. They were joined by comedian Ken Jeong and he kept everyone laughing as they got through the hardest part of the competition. The first act on tonight’s all-new episode of “America’s Got Talent” had been Junior New System. JNS was a group of guys that grabbed their attention during auditions by dancing in heels and they maintained their wow factor. They started out dancing in sneakers and then strip down back into heels where they made sure to step it up from last time. They brought in outfit changes and never allowed there to be a dull moment.

The judges had all been hooked during the routine and even Howie was like “Don’t worry about the next part because I’m going to vouch for you”. He had just loved them much and so for the first act they really came out fighting. The dance group was later followed by Harold and Regan and those two danced beautifully together, however, there was a disconnect because Mel Be noticed that Harold was looking at his partner the entire time and unfortunately his partner went out of her way not to look at him. People could tell that they were dating and that they hadn’t ended as mutually as they claimed, so it wasn’t the best performance despite being an improvement from their audition. The next act had been one that the judges had really been looking forward because three out of the four had loved the US the Duo.

The married singing group had impressed most of the judges though Howie hadn’t been a fan of them. He thought they should sing a popular song rather than an original one they had written because he said that might have pulled him in and so he hadn’t been a fan when he learned that they were singing another original song. The two were singing their own song called “Stop, Just Love” and they had been in a great mind because they just found out they were pregnant. They had also thought their new song was an improvement from their first once and unfortunately, the judges preferred their first song. They said this new one wasn’t as good and again Howie had hated on the original song idea. He again suggested they pick a popular song and the other judges shouted him down.

The rest of the judges still believe an original song was best because it made the singers memorable. It never hurts to be memorable in a competition about standing out and so the judges were in for a treat with Kevin. Kevin Blake was a magician and last time he had stood out because he rapped his way through his magic act. Simon hadn’t been a fan of that and Kevin made sure to scrap it when he came back for this round. This time he had been very serious as he asked Mel B to follow him outside and had her tie a beautiful diamond ring to a bunch of balloons. They had watched as her ring floated away and when they came back inside he told her to open up the present he first handed to them. Thankfully, Mel’s ring had been in the package and how Kevin was able to get it in there no one had any clue.

Kevin’s disappearing ring was a big improvement over the rap and so he could be a real contender. The next act of the night was Mochi the Diablo. Mochi brought it with his light last time and this time around the audience got to enjoy themselves as Mochi took them around the galaxy. The judges had loved it and Heidi had even tried to do it herself but she nearly hurt herself and realized it was best to leave it to the professionals. Mochi’s act was followed by Lily Wilker who was also known for her animal noises. The last time she had been great at copycatting animals from the farm and tonight she chose to go with animals from the jungle. Lily didn’t have any competition in her category because she knew there wasn’t anyone like it and she was right. The animal act that everyone thought would be better than last time had actually been worse. Pam and her singing dog Oscar got the red buzzer from Mel because she said her ears couldn’t take it anymore.

Simon had differed because he had to enjoy watching an actual singing dog and so he claimed that he would fight for Pamela and Oscar, however, the judges weren’t big fans of a howling dog and so that was more up in the air than Simon let on. The next act had been better. Daniel Emmet was a great opera singer and last time he had chosen a song that wasn’t connecting with the audience, so Simon had given him this obscure song that he had to learn in an hour. He got the song, he practiced the song, and then knocked it out of the park on the stage. Daniel had impressed Simon when he came back that time and unfortunately, he hadn’t quite moved Simon during this round. The audience and most of the judges had loved Daniel’s voice because they believed it to be special. And so the only one that hadn’t given him a standing ovation had been Simon.

Simon had thought it was good and had said that he couldn’t wait to hear Daniel again, but he hadn’t seemed that convinced that he liked the song and even the people waiting in the back were confused about whether or not Simon approved. The next act had been the Voices of Hope and they were a children’s choir. They hadn’t quite wowed everyone last time and had been given a list of what to improve for when they came back. So they actually followed the list! They came back with stronger vocals and they sang a song they were more familiar with. They sang “How Far I’ll Go” and was considered the most improved act to come back tonight. They were so good that someone pressed the Golden Buzzer and a group of kids that had truly moved everyone were honored. They had been an act to beat and so the next act strove to frighten everyone.

Aaron Crow didn’t speak. He instead was a great marksman and last time he has scared Howie. Howie had run the risk of being decapitated when Aaron Crow threw an ax at the apple on his head and so this time around it was Heidi taking the chances. She had an apple with a ring attached and somehow Aaron hit the ring with a crossbow. He managed to hit it despite spinning around and being in motion, which wasn’t something that Heidi knew. She found out about it afterward and said she would have run away if she knew what was happening through her not knowing was part of why the act was good. Aaron was a showman and he managed to frighten everyone because they had all been scared that he would hit either Heidi or Ken who was just holding the plate on Heidi’s head.

The next act of the night had been Carmen Lynch. She was a comedienne and she had everyone in stitches last time but, while she was funny again tonight, she was one of those people that were up in the air because not everyone got it. Except next act brought back the entertainment. Maddoc was a young white kid from a small town and he was great at being the rapper Patches. He came up with another all original rap and had even Ken had blown away because he hadn’t been expecting that rap from fresh-faced Patches. Patches was all about burning the building down and so everyone said they should push him into the next round before he turned to arson. After him, there had been Christina Wells who sang “Never Enough” and sadly tonight wasn’t her night because, despite the awesome song selection, she had been pitchy.

The judges knew that Christina was better than her performance she gave tonight and so they mostly remarked on the times she had been great in the song. They liked it when she hit the higher notes and so they were hoping for better from her. Now, the next act had also been a singer. Andrew Johnston sang “Imagine” and everyone besides Simon had enjoyed it. He said something about how Andrew wasn’t connecting with the audience and had later told the other judges that he needed more of a stage presence yet the act that followed him might have had too much of a presence. The elderly couple Celina and Filiberto were sweet grandparents and this time around they actually had a routine. And so that made this time a little better than before even if it had been a little too much.

Those grandparents down and dirty tonight. The judges later said it was like “100 shades of gray” and so odds weren’t high for them. There a few daring acts afterward with Trinh Tra My and then with those surfer dudes that chose to go without shorts this time around when they threw themselves on death-defying traps. But the last act of the night had been Mary and Tyce who were duo trapeze act and while they upped their wow factor by throwing fire as well as a blindfold – Mary fell. She literally fell from up high and everyone was wondering if she was okay. She was okay afterward thankfully and so that fall couldn’t have been held against them. And surprisingly it wasn’t.

Mary and Tyce made it through along with Christina, Aaron, Voices of Hope, Us the Duo, Junior New System, and Mochi.

Everyone did their best tonight and, while they may not be moving forward in this competition, they still showed they had what it took to be famous one day!